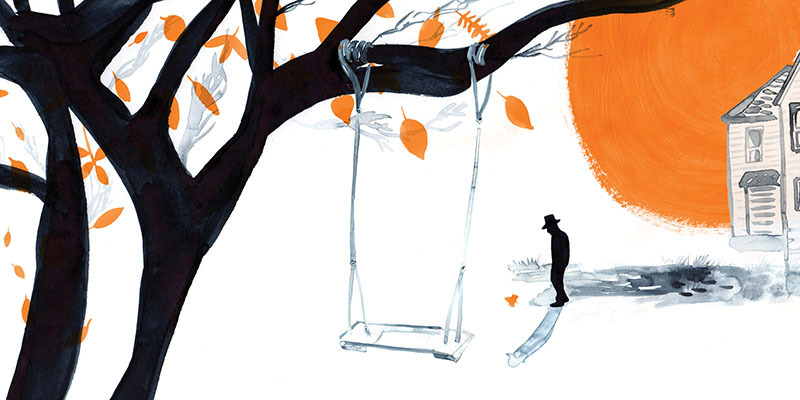 After Labor Day, summer begins to fall away, though not all at once. In many ways it stays on like the finish of a wine. Minnesota is a region of moderate people and extreme weather, particularly extreme winter. If we are to be defined meteorologically, winter surely defines us in these northern reaches.

But it is the ninth month that sets the calendar.

The ninth month: also the end of gestation, the start of the most life-transforming experience many of us will ever know, parenthood. My son — who was born into this season, having come home from the hospital on the day after Labor Day in 1980 — claims that September is a season all by itself. And though he now lives in the antipodes, in New Zealand, where his favorite month has abruptly become the beginning of springtime, I still associate September with him. I think he is right about it being a season on its own.

Among other things, it used to be the season of pie-making. We had two trees in our back yard; one remains. It is a Gravenstein apple tree, unusual for these parts, which bears almost no fruit anymore. I sometimes describe it as “menopausal.” But when my children were small, the higher branches overflowed with an abundance of fruit. In September the ground would be littered with browning windfalls, turning to mush underfoot. Lately, it produces a dozen apples at most — in the years that it bears any at all.

Soon after we moved to this house, I hung a swing on one of the branches of the other tree. My son used to sit on that swing for hours.

Now the swing is gone, because the bark on that branch acquired a fungal infection and died. In time the entire tree died, cut up for firewood. It’s a story echoed all around us. Our neighborhood is changing. Thirty years ago there were many family homes here like ours, with an apple tree in the back yard and — no kidding — a white picket fence. But there are fewer now, as the number of rentals goes up and the housing stock, including my own house, ages and declines.

In September, children from Saint Mark’s Catholic grade school walk by. My children used to join them. The girls wear plaid jumpers, the boys black pants and red polo shirts. I see them looking earnest, see them giggling; the school has been there for 100 years, and the sight of uniformed schoolchildren has become a part of my neighborhood’s texture.

But, of course, enrollments are falling. Will the school be there in 10 years? Maybe not.

It won’t be a catastrophe if Saint Mark’s closes. Those same schoolchildren walk past a public school, formerly known as Longfellow, that now stands empty; it closed lately after 110 years, and nothing dire happened when the doors were locked. I know enough urban history to understand without concern that neighborhoods and urban spaces have a life cycle, that they grow, decline, morph into other sorts of places. It’s hard not to discern that pattern writ large or small everywhere. Change happens. And in fairness, it’s entirely possible Saint Mark’s School will survive. It might.

Still, the prospect of its disappearance is on the table now — the end to an institution that, after a century, has begun to look permanent. The tenuousness of the school’s future is as present as the yellowed edge of the apple leaf.

It feels as if my life is turning into big catalog of such losses, waiting to happen.

For the children going back to school, and many of us, September means above all the end of summer. There is a famous and not very good French painting, September Morn, which somehow became a cause célèbre for artistic freedom in the early decades of the 20th century. It depicts a nude woman about to bathe in a lake or a bay of the ocean. It is certainly not an erotic artwork, and when I first read about it at age 10 or so, I would not have been aroused by it even if it were. What I remember thinking, when I heard about the painting, was, “This is silly. Nobody goes swimming in September.”

And in Minnesota nobody did, not after the first Monday anyway. In the tourist industry, May and September are known as the shoulder seasons, the ones that adjoin but are not a part of the holy trinity of June-July-August. Labor Day marked the definitive end of swimming season. The beaches were closed, the public pools were drained and, in any case, you were back at school.

School declared its claim on your time. The after-school hours grew doubly precious, and each day, as the sun began to set earlier enough to notice, every after-school minute felt more threatened.

My son was a great bicyclist when a teenager, and a great walker, and the routes he liked best took him out into the semirural stretches of northern Dakota County, a rind of agricultural land that wraps below the metro area. One September Sunday when he was perhaps 15, I suggested he make the 35-mile ride down to Northfield, Minnesota, a town that advertises itself as offering “cows, colleges and contentment.” The unstated part of my suggestion was, “It’s okay if you want to skip church today.” I am still enough of a Catholic that I don’t fully trust the idea that you can honor God just by walking in his creation, but on this day there was little doubt in my mind that a ride would be far more edifying.

And it was. Later that afternoon, his younger sister and I drove down Highway 3 to collect him. A form-fitting blanket of corn covered the land — huge expanses of corn, their vertical weave muffling all the contours.

Corn in the late summer is like those apple leaves, green turning to gold. Though I know it is a water-hog of a crop that consumes whole aquifers, I cannot think of corn as anything but dry. Its papery leaves rustle, and there is always dust over a cornfield; pollen, I suppose. A September sunset in farm country has a luminous quality, a way of magnifying itself, a stillness. If you sit with it long enough you will start to feel a Brownian motion in the air.

Sunset: It would never occur to me to describe September in terms of morning, though the early hours can be just as beautiful then as any other time. The month defines itself as the close of day.

Years ago, when I was a young man myself and obsessed about death, the defining book on the subject was Elisabeth Kubler-Ross’ On Death and Dying, which set out five identifiable stages in the human responses to death: denial, depression, bargaining, anger and acceptance. September is the acceptance mode of the year. True, it can be followed by something magically beautiful, Indian summer (just as death can be preceded by a holiness in the body), but what haunts September is the certainty that this will end.

In our deepest selves, a part of us is still attuned to the agricultural year. We live in massive denial of our own fragility — do you know anyone who actually produces food? I don’t. Yet this is the month for thinking about crops coming in. We understand the concept of harvest in our bones, even if we have never harvested a thing. There is spiritual nourishment in those fulsome, overflowing stalls at the farmers’ market.

Here in Minnesota, by Labor Day weekend the markets are orgiastic in their plenitude. But they will get smaller and smaller until they finally shut down around the first of November, the profusion of the year reduced to a remnant of acorn squashes and too-large cabbages: vegetables the size of fieldstones, attended by the knowledge that beautiful food is at bottom ephemeral.

And maybe we remember the dark side of that proposition, too, the ancestral memory that the crop can fail. When our apple tree still bore, I would go out in the yard and pick enough to make pies. Sometimes I would reach for what looked like an especially red apple, only to find that it was a husk, hollowed out by wasps.

Mutability and the sadness of mutability have always been with us, but the predictability of seasons and their rhythms takes the edge off the heartbreak. Now, the seasons seem to be changing.

That Gravenstein apple tree is not going to outlast me. Some time in the next few years I will need to cut it, too, down for firewood. I’ll get over the loss; I think I might plant a pear tree next or a winter-hardy apricot.

And I can talk about a school closing and keep my composure. But can I stay calm if the subject is the glaciers melting? Or the extinction of the bees? In my lifetime, the dawn chorus has
gone from being a torrent of birdsong to the annoyance of a few loud robins near my window. Can I keep my composure when I talk about the death of birdsong?

Now the son who taught me to appreciate this month of September has moved to New Zealand. And I worry that this is only the first of many ways the world has turned upside down.

James Silas Rogers is the editor of New Hibernia Review. His creative nonfiction has appeared in such journals as New Letters, ISLE: Interdisciplinary Studies in Literature and Environment and South Dakota Review; his poetry in Natural Bridge, Crab Creek Review, North Dakota Quarterly and elsewhere. His chapbook, Sundogs, was published by Parallel Press in 2006.