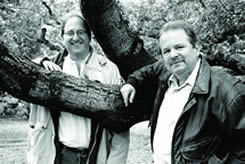 Ah, the Hollywood life of a screenwriter: making a pitch to Steven Spielberg, working with legendary animator Chuck Jones, selling a script for three-quarters of a million bucks. As James Jennewein ’77 will tell you, such red carpet moments are interspersed with real life: begging the assistant to the assistant of an influential agent to read your screenplay, networking until your calendar is overrun, and writing, rewriting and rewriting some more.

Over the last two decades, Jennewein and writing partner Tom S. Parker have sold more than 20 screenplays to major Hollywood studios. Their movies include Stay Tuned, Major League II, The Flintstones, Getting Even with Dad and Richie Rich. They are happy with the films and pleased that their comedic vision has been so honored.

And yet, as Jennewein also will tell you, that “fairy tale come true” of becoming a full-time Hollywood screenwriter has a creative dark side. “Since movies and TV are such collaborative mediums, what ends up on screen can often bear little resemblance to what you may have written,” he says, “and you can begin to yearn for a different kind of creative experience.”

So after 15 years of what Jennewein calls “a fair amount of success in the movie world,” the writing duo decided it was time to enter a different world: the novel.

To write one, Jennewein and Parker went back a thousand years to the world of Norse mythology. They read such epic stories as Beowulf and “Hrafnkel’s Saga” and “Laxdaela Saga”: Hall rowed in the forehold of the boat . . . and as he jumped to land Thorolf happens to be standing near, and forthwith hews at him, and the blow caught him on his neck against the shoulder, and off flew his head.

Amid those strange names and violent events and mythic lore, the duo found their novel idea. About three-and-a-half years later the young adult novel RuneWarriors was finished.

The book is the coming-of-age tale of a Viking boy named Dane the Defiant, who, after the death of his father, must embark on a mythic quest to save the girl he loves and defeat an evil tyrant. Unlike the Norse sagas, RuneWarriors offers a special brand of action and comedy. “A page-turner with definite appeal,” wrote Kirkus Reviews, adding, “boys especially will enjoy the pell-mell action, the wisenheimer narration and the belch-and-flatulence humor embedded in the adventurous tale.”

Amazingly, the new novelists lived another fairy tale come true. Two publishers wanted the book. The writers settled on HarperCollins, which offered them a three-book deal.

Jennewein, who lives in Santa Monica, California, and Parker, who resides 20 miles away in Topanga, worked on the trilogy in the same way they fashion screenplays. After discussing ideas and developing a storyline, one wrote a synopsis, which both fine-tuned. Each then wrote alternate chapters and traded them via email.

Lots of discussion and rewriting later, a first draft was finished. The process continued with rewriting until a final draft was ready for the publisher.

Should the publisher want to continue the series, says Jennewein, “We have the next trilogy mapped out storywise in case we get lucky.”

Jennewein, who has “a passion for storytelling,” won’t pick a favorite between writing for print and the screen. “The film world offers unique pleasures and satisfaction,” he says, such as seeing your work 20-feet-tall on a movie screen.

Writing a novel “is the ultimate artistic experience. It’s just you and the reader.” Jennewein adds, laughing, “For that luxury you usually get paid a lot less.”

Parker says it’s “great to sit in a theater and have an audience enjoy a movie I’ve written,” but finds, “it’s much more rewarding to write a novel, because I’m communicating directly with my audience.”

These days Jennewein and Parker are in both worlds: they’re writing another novel and pitching a pilot for a one-hour TV show.

Regardless of the format, Jennewein says, he has strong advice for students: “Keep writing. Master the craft. Tell a great story.”

He admits that succeeding as a screenwriter or a novelist does take a bit of luck. “Still it comes down to: just do the work.”