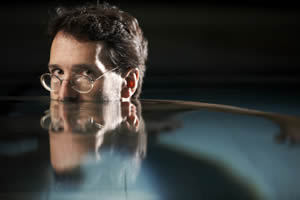 What I am doing here is dishes, mostly. And gobs of laundry. You wouldn’t think three kids would have so much laundry, I mean, how many shirts can three kids possibly wear? It’s not like we live in the Arctic, and they have to have 20 layers of fabric so they can go trap wolverine for pin money or whatever, but you don’t know these kids, these are their mother’s kids and thus genetically far more attentive to graceful appearance than their dad, who looks like a dissolute wolverine. These kids are apparently ornate musical productions with lots of costume changes, and the way they clean their rooms on Saturdays is to shovel all the clothes on the floor down the laundry chute, at the bottom of which is their father, roaring.

But I asked for these children. I prayed and yearned and was thrilled and delighted when they emerged from my wife one after another like a circus act, and I wrote lyrical sentimental muck about them when they were little, and now that they are lanky and sneering in ways I could never have imagined, I cannot retract the vows and oaths I swore when they were born, which were that I would expend every ounce of energy and creativity to be their most excellent and attentive dad, which I have tried to be for 15 years, with middling success and a stunning amount of laundry and roaring.

I got exactly what I asked the Coherent Mercy for, which was the chaos and hubbub of children, who are the most extraordinary creatures of all, and I have often thought that what I am here for, if I can get over the whole laundry problem for a minute, is them. Also I have often thought that the Coherent Mercy clearly relishes irony and often gives you exactly what you asked for, which is more than you knew you wanted.

Also I am here for the way dragonflies and damselflies do that geometric zigzag thing in the air totally effortlessly, which absolutely knocks me out. I have spent many hours staring at them in a trance, explaining to people that I am conducting a scientific project. They look at me oddly. And I am here to hear thrushes in late winter and to gape at osprey and to taste my way judiciously through excellent red wines from countries where the sun shines. And to shuffle humming through the rain, gentle and ancient and patient and persistent and holier than we ever admit. And to hear and foment laughter, the coolest sound there is. And to witness grace under duress; that more than anything.

I have often thought that I am the luckiest guy on earth, for any number of reasons, starting with being born American of Irish ancestry in New York—what a combination of swaggering cultural confidence and addiction to tall tales and the insistence that creative energy can jolt the universe. And I was a middle child, balanced between the weight of expectation and too much independence, and I was a child of the middle class and so was fed and clothed and safe and educated and no one shot at me.

In college I woke up a little spiritually and mentally and socially and then shuffled on into a life utterly absorbed by stories, their swing and cadence and bone and song, and a cool woman married me and I have had a sweet confusing painful delighted mysterious marriage that is different every 11 minutes, and we were graced with all these children, some of them twins who move so fast I am never quite sure how many twins there are in the house at all one bit, and I lucked into work that has everything to do with listening and hearing stories and shaping stories and sharing stories. At age 50 I conclude that I was born and made for stories; I am a storyman. I believe with all my hoary heart that stories save lives, and the telling and hearing of them is a holy thing, powerful far beyond our ken. Without the sea of stories in which we swim we would wither and die. We are here for each other, to touch and be touched, to lose our tempers and beg forgiveness, to listen and to tell, to hail and farewell, to laugh and to snarl, to use words as knives and caresses, to puncture lies and to heal what is broken.

There are two words in the lore of Judaism, our parent stock, the branch of the human family that heard the words I Am Who Am (the bluntest syntax in the history of the world!), and these two words, tikkun olam in the Hebrew, are easy to translate but hard to explain. My friends who speak the ancient tongue tell me the words mean repairing the world, that the universe when it was imagined into being could not hold the unimaginable infinity of the Word, and so shattered into countless shards. Our job, the job of every human being, perhaps every living being of every shape and size, is to, by living attentively, by being your truest self, repair and restore the broken gift.

By now I am absolutely sure what I am supposed to do: sense stories, catch some by their brilliant tails as they rocket by, carve and sculpt them into arrows and fire them into the hearts of as many people as I can reach on this bruised and blessed planet. That’s all. That’s enough.

A few days after the murders of September 11 a magazine editor called me and asked if I would contribute an essay to a special issue she and her colleagues were hurriedly making in the aftermath of September 11. Nope, I said. Three of my friends were roasted to white ash that day by that foul coward bin Laden, and his crimes had already produced an ocean of empty opinion and windy rhetoric and witless commentary around the world. Everyone was so confident they knew what to say in the face of the unspeakable, and I refused to add to the babble, and said I would try to offer the only thing that could or should be said in the aftermath of such horror, which is nothing. The only proper thing in your mouth at such a time is prayer, best said silently.

In the kitchen that night I reported this conversation to my wife and daughter.

So what are you going to do? asked my daughter.

But what are you going to do?

What do you mean?

Well, Dad, you are always lecturing us about how if God gives you a talent and you don’t use that talent that’s a sin, and, you know, no offense, Dad, but you only have the one talent, you say so yourself, and that’s telling stories, so if you don’t tell a story here, isn’t that a sin? No offense.

In the next three months I wrote three stories, one for each of my friends, Tommy Crotty and Farrell Lynch and Sean Lynch, whose wives sleep alone and whose children are unfathered, and published them in magazines, and gave them to anthologies, and badgered newspapers and newsletters and parish bulletins and editors in other countries to reprint them for free. I mailed them to as many people as I could think of and put them in a book of essays, and I still don’t think I did enough to mill my small peculiar gift into an arrow of furious hope against the dark arrogance of Osama bin Laden, who is sure he knows the mind of God; and like every twisted soul who murders under the banner of heaven, he is destined for the deepest pit of Gehenna, where he will hear the sobs of children until the end of time.

When I was a kid I wanted in the worst way to be a pro basketball player, though even I had to admit that there didn’t seem to be a whole lot of job opportunities for little, skinny guys with ponytails and thick glasses. When I got older all I wanted was to be loved by and to be in love with a fascinating woman. It took me a long time to realize that all women are fascinating and that being in love with and being loved by one was a wondrous gift but not a destination, a verb and not a noun; in fact I learned that being married to one was only a much deeper form of excitement and confusion than the series of muddled love affairs we engage in before we marry. Not until a few years ago did I realize that I was on earth not to be loved but to love. That’s all. That’s enough.

I am here to witness. I was sent to sing. I am here to catch and tell the story of the teacher who ran with a child on her shoulders out of the ash and fire of September 11. I am here to tell you that a man and a woman reached for each other at the high windows in the south tower, and they held hands as they leapt into the void. I am here to tell you that a man carried a colleague 80 floors to the street and then went back in. I am here to marvel at a pope praying with his almost-assassin, to marvel at victims forgiving the murderers of their children in South Africa, to be riveted by all the thin bony nuns who have carried the church on their shoulders for centuries and hardly anyone ever shouted my God without those women there would be no church whatever whatsoever absolutely! I am here to hear all the stories of all the women who have bent every ounce of their souls to love, which is pretty much all the women who ever lived. I am here to see illogical courage and faith. I am here to sing grace under duress.

I am a storycatcher, charged with finding stories that matter, stories about who we are at our best, who we might be still, because without stories we are only mammals with weapons. I am here to point at shards of holiness. That’s all. That’s enough.

Brian Doyle is the editor of Portland Magazine at the University of Portland. He is the author of eight books of essays, nonfiction and “proems,” most recently Epiphanies & Elegies (Sheed and Ward).

The photo here of Brian Doyle is by Eric Cable.