After hitting the crest of a hill too fast, our ATV launched in the air like an Olympian off a ski-jump and hit the ground with a bone-shattering slam. Coming to my senses, I turned to my right and saw my best friend, Kevin, lying motionless in the passenger seat. 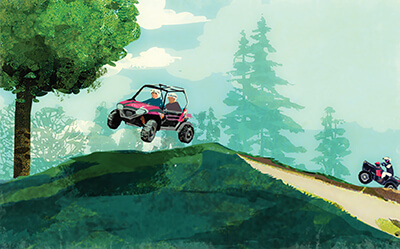 Kevin was my first friend at Notre Dame. I had spent my first few months there friendless, eating at the dining hall alone and wondering why the smiling tour guides and my parents had lied to me when they said college would be the best four years of my life. Then I met Kevin. After bonding over a love of Family Guy, we began to hang out every weekend, and suddenly things weren’t so bad anymore.

Kevin was extremely kind. To this day I cannot recall a single time I ever heard him malign anyone. He was also the most introverted person I had ever met. Conversations with him would consist of me rambling for long periods of time while he listened intently, nodding and smiling. Kevin was the best listener. Although he might not say a word in a conversation for many minutes, I could feel him ingesting the discussion, giving thought to even the most pointless small talk. And years later, he could recall even vague details from conversations I have long forgotten.

I have also forgotten the events leading up to our ATV crash, although not by choice. The concussion entirely erased the memories of the 20 minutes preceding the accident from my mind. From my point of view, one minute we were having the time of our lives riding through the pine-hued trails of the Black Hills National Forest and the very next second we were flipping violently through the air. As the driver that day, the loss of memory is especially cruel. I have no idea what I was doing that may have caused our destruction, or what I could have done differently to prevent what was about to unfold.

As I glanced over at Kevin, I saw him move. Thank God — he’s alive. Then the force of the impact caught up to me and I collapsed out of the ATV and onto the ground. An immense pain pulsed in my right hand like the world’s largest, coldest metal door had just slammed shut with my fingers in the crack. Looking at it, I saw a mess of blood, skin and bone where my fingers should have been.

If the measure of a man is how he handles himself under the most intense forms of stress and pressure, I have many miles to go. After seeing my hand, I began to scream and cry. Forcing myself to stand, I stumbled around our demolished vehicle moaning like the victim in a horror movie. I staggered over to Kevin. Like me, he had gashes on his face and his right hand was severely mangled. Apparently when the ATV went airborne we both instinctively grabbed for the roll bar at the roof of the vehicle. As the bar hit the ground, our hands were crushed. “Kevin,” I wailed, “I’m sorry!”

After all, this was all my fault. Not only was I piloting the doomed vehicle, but the whole trip was my idea to begin with. After we left campus our junior year, I invited Kevin to join me and some high school friends at my family’s cabin in the Black Hills. This was a big deal. Hanging out with a college friend outside of school symbolizes that a friendship has evolved past the serene bubble of campus life and into the realm of real-world relationships. This was supposed to mark how far I had come from those friendless first months of college and present a great opportunity for us to continue to build our friendship. Now I had taken that friendship, strapped it in an ATV and almost literally drove it off a cliff. As I looked at Kevin’s battered body, at the damage that I had caused, I realized it would have been better for him if we had never met at all.

Our friends sprang into action, dragging us into their vehicles. As we sped through the forest on the way into town, I was still a mess, howling “WHY?” and “WHAT HAVE I DONE?” I looked over at Kevin, fully expecting him to pay no attention to the man who had just caused this disaster. Amazingly, although his body was more battered than mine and his pain greater, he joined the rest of our friends in the effort to keep me calm. I sensed no anger or resentment from him. “We’ll be okay,” he said, and mustered what had to have been the most difficult yet genuine smile of his life.

Later, we were strapped onto spinal boards and placed side-by-side in an ambulance. “I’m sorry, Kevin,” I continued to cry as I stared uselessly at the roof of the ambulance. “We’ll be okay, Ben,” he continued to assure me, “We will be okay.” He reached over with his uninjured hand and held onto mine.

At the hospital, the doctors amputated the top third of my ring and pinky fingers, stapled shut the open gash that dissected my left eyebrow, and dismissed me from the hospital with an oversized bottle of painkillers. They determined that Kevin’s injuries were much more severe, and he was airlifted to Denver. I felt a welling of despair and helplessness knowing that his life had changed forever in a matter of seconds and that it was entirely my fault. Despite his assurances in the ambulance, as Kevin was flown away I wondered if he would ever want to see or speak to me again.

Showing his true character, he did. We talked via Skype several times that summer, updating each other on the progress of our respective recoveries. Each time we spoke, I vehemently apologized for causing the accident. Kevin wouldn’t let me dwell on it. Make no mistake; we talked at length about the accident, about how horrible it was, how our bodies were healing and how we were lucky to be alive. But each time I tried to take the blame, he wouldn’t let me. And slowly, I began to believe him.

Still, I knew the road ahead would be difficult for him. Kevin’s right hand had been permanently disfigured; his ring finger is a short stub and the rest of his hand is perpetually bent in the position your fingers make when holding a pen. Writing, typing and simply lifting a backpack now became serious challenges for him as we prepared for senior year.

To make up for this, I decided that when we returned to campus I would compensate Kevin for his injury by offering to be available on demand for any task he required, large or small. I would be the Chewbacca to Kevin’s Han Solo. His literal right-hand man, since his was not functional. Kevin would have none of this. From the very first time I offered my services, Kevin told me the best thing I could do for him was to sit down and join him in watching some more Family Guy. He didn’t want a servant, he just wanted a friend.

At that moment, I was finally able to start healing. While my cuts had closed and my hand regained its strength, the deepest pain I felt was the emotional anguish from holding myself responsible for what had happened to Kevin. He had never blamed me, even in the traumatic minutes immediately following the accident, but it was his openness and even eagerness to continue to build our friendship afterward that allowed me to forgive myself.

I don’t know if Kevin acted the way he did in the minutes, months and years following the accident because he was aware of what I was going through or because he was just being himself. Either way, it stands out as a testament to the kind of person he is. He is eternally optimistic, kindhearted and selfless, the type of person who gives the rest of us faith that there truly are good people in the world.

Last year I was married to my longtime girlfriend, and Kevin stood beside me as a groomsman. During the photography session, I took a one-on-one picture with each man in the wedding party. In most of the photos I have my arm around the groomsman, but my picture with Kevin is different. In that one, Kevin and I stand strong with giant smiles, four years after the crash. We are facing each other, his wounded hand in mine, in the world’s strongest handshake.

Ben Moeller’s essay was one of two second-place winners in this magazine’s 2016 Young Alumni Essay Contest. He lives in Des Moines, Iowa, with his wife, Naomi, and works as a tax accountant for Ernst & Young. He can be reached at benjmoe@gmail.com.