It was a cold spring day in 2011 when Jess, my sister, asked me to meet her at a barn to see the Arabian horse she wanted to buy. “I need your help to decide whether I should take him home,” she said, which really meant Jess had already bought the gelding and needed me to tell her husband that she’d found a great horse. Act first; then assess. That’s her way. 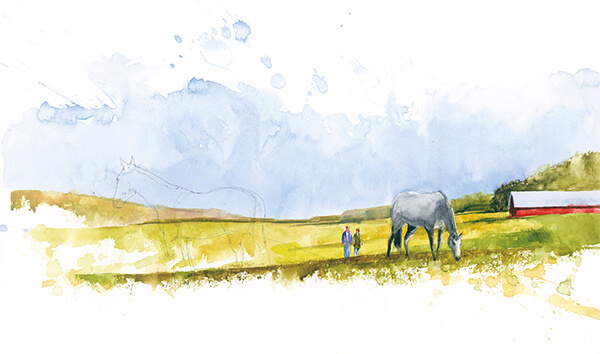 But I saw a spark in her eyes that day. I felt the memories stirring inside of her of our childhood horse rides into the woods, through the stream and up the steep hill. My feelings were so overwhelming, I cried on the drive home. She never shared what led her to buy the horse, but I saw a need in her eyes to recapture our childhood.

I went to the barn with her every weekend. I was captivated by how Jess and her new horse, Tinker, got along. He would nicker softly while she brushed him and talked to him. Together they seemed at peace. I watched one Saturday evening as she rode him. Her slim figure relaxed on the gray horse as he arched his beautiful neck and happily obeyed her every command. I was so taken that, less than a month later, I bought my own Arabian.

Actually, I bought two, and then I bought a small farm so I could keep my horses and hers close. I kept them all safe, warm and fed, doting over them like a mother hen. I watched their every move to make sure they were not hurt or sick. I reviewed the ingredients in their feed. I tested and weighed each bale of hay. I checked each horse as I walked them in from the field to make sure they had no cuts, bumps or bruises.

Jess, on the other hand, rode Tinker and put him away wet. She didn’t clean her saddle after a ride.

“You’re going to give him ulcers.”

She shook her head at me. “Relax, will ya? Just have fun.”

“You need to cool him down. Not put him away hot. He will colic,” I told her sternly. She ignored me.

Like an old married couple, we seemed to always be bickering. Despite our endless complaints, I enjoyed her company and I think she enjoyed mine. She came out to ride every weekend and often during the week, too. We grew closer over the summer. More like friends. But early the next year, just before Jess turned 40, she delivered a sucker punch right to my gut with a phone call.

Jess: “I have to tell you something. Don’t freak out.”

My internal monologue blabbering in the background: I hate it when people say don’t freak out. Don’t they know that’s the natural human response to that sentence?

Jess: “A lump. I have breast cancer. But it’s no big deal. I just need to have surgery, that’s all. Like a boob job.”

My mind started to spin; I think my heart stopped. This can’t be real. I felt my stomach muscles tighten from the nausea that threatened to consume me. No big deal? She can’t be serious. A boob job? What?

This exchange was typical of Jess. Playing it off as though it was nothing. True denial lived in her, always had. She was always putting off the uncomfortable and inevitable.

Tears were already on my cheeks. She heard me sniffle.

Me: “Stop. Tell me what is happening. What surgery? Who diagnosed you? When did you find this out?”

Jess: “Christ. I found a lump last week. I went to the doctor, and he did a biopsy. I got the results back yesterday. Don’t tell Dad yet.”

Jess, now clearly exasperated with me: “I have breast cancer. I am scheduling surgery for next week, and I may need radiation or something. It’s not a big deal. So don’t get all emotional and stuff. I’ll end up with new boobs. Bigger ones, I hope.”

The blackness of dread and sadness squeezed my soul, my heart, my brain. As a nurse, I figured I had a good grasp on the possible consequences of the disease. I thought I understood the process and could help my patients through difficult situations. Help them make decisions about their health and well-being. Those arrogant beliefs were crushed during the few seconds when Jess said she had cancer.

At that moment I knew my preconceived idea of control over my life was a fallacy. I had carefully planned my education. Controlled my career path. Surrounded myself with successful, optimistic people. But slowly I began to understand that I was being moved, none too gently, to a new way of thinking and feeling.

Watching Jess, initially so blasé, go through her surgery and subsequent treatments tore at my soul. With a stage-four breast cancer diagnosis, she lost her job, her hair and almost her life. But she never stopped fighting. Through her anger and tears of grief and pain, she screamed victory. Slowly she crawled her way back to life, even though she echoed a death sentence almost daily.

“I have five years max,” she would say.

“I will die from this,” she kept telling me.

“I want to live,” she said one day. Staring at me in a way I had never seen before. It was a telling stare.

Jess showed me I was heading in the wrong direction, trying to control life rather than live it. All she wanted to do was ride her horse, play in the barn, watch the horses graze in the pasture and drink a beer. She fought the cancer with everything she had, but she still let life happen.

With that, fate thrust me through the looking glass, no longer content just having me see the reflection of what I was, but, instead, what I could be. I suffered no cuts or abrasions, but the landing was still painful.

I began to fear fate, even test her. But, like stroking a scared child’s hair, fate comforted me with soft nickers from the horses and rides into the sunset. Soon I, too, began to soak up sunsets, bathe in the color of the grass beneath my feet, smell of the clean, crisp morning air. As my thought processes changed, my path changed, too, perfectly in line with my fall from the proverbial pedestal.

Then, I took my cues from Jess. She steered clear of people or things that did not make her happy. She took chances. She made life worth living. It did not matter how much time she had left on this Earth; she was determined to enjoy it. And I followed suit, with her as a constant reminder to take a chance, to live life.

“I found another horse I want,” I said to her one day. “But I don’t know if I should take on another one.”

Jess laughed and oh, so eloquently said, “It makes you happy. Just buy the damn horse.”

Kelley Madick lives in Congress Township, Ohio, and is on the faculty at the School of Nursing at Kaplan University. She is the president of Classical Attraction Dressage Society, and owns and shows Arabian horses.