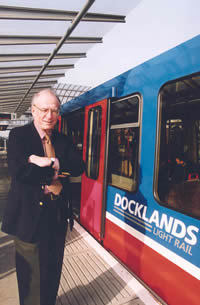 As commissioner of public transportation for London, Bob Kiley ‘57 sometimes sounds like a man playing Monopoly.

“If we can get control over the commuter [rail] services, that will be a big step forward,” he says to a visitor to his office, as if already holding the deeds cards for the Reading, Pennsylvania and B&O railroads with only the Short Line eluding his grasp.

This isn’t all that far from reality.

Transport for London, the organization Kiley has headed since 2001, was created to plan and manage all transport services in Britain’s capital city. That includes the famous red double-decker and other city buses, which carry more than 5 million people each weekday, and the equally famous London Underground, on which about 3 million people ride daily. The organization also is supposed to ease motor vehicle traffic and even promote the efficient movement of people on bicycle or foot.

It’s a mind-boggling task. London has too many people trying to get too many places through arteries that weren’t designed to handle so much blood flow. It could take a lifetime to comprehend the circulatory system of this ancient city full of roads and rails and bridges built up over thousands of years. So how does an American from Minneapolis come to be the equivalent of cardiologist-in-chief?

Because of his track record in treating transportation systems in failing health.

Kiley, 69, reformed the dilapidated “T” system in Boston in the 1970s. He followed that with an even more impressive turnaround job in New York City in the 1980s, when the subway was both filthy and dangerous. When Kiley left the position after seven years, safety and cleanliness had improved noticeably and ridership had rebounded.

Kiley didn’t set out to be a transportation wiz. Two years after graduating from Notre Dame with a business degree, he was serving as president of the left-leaning National Student Association, later exposed as having been covertly funded by the Central Intelligence Agency. Kiley enrolled as a graduate student at Harvard but left early to work directly for the CIA. There he helped arrange covert financial support to youth and student groups in foreign countries.

In the late ‘60s Kiley quit the CIA and after a series of job changes ended up in charge of Boston’s transportation system. The job put Kiley in the public spotlight like never before, but it was also during this time that he suffered a monumental personal tragedy. In 1974 his wife and their two young children were killed in a car accident. (He and his second wife, Rona, have two grown sons.)

Following his success with the T and then in New York, Kiley spent the 1990s in business and then as president of a nonprofit business association in New York City.

In 2000 the call came asking if he’d be interested in the job of transport commissioner of London. The opportunity to manage the world’s original underground rail (the Tube, as Londeners call it, opened in 1863) proved too enticing to resist. The pay wasn’t bad either—almost half-a-million dollars a year and a free townhouse in a city where real estate is among the most expensive in the world.

In London Kiley found problems akin to those in Boston and New York—a system suffering from decades of neglect—but also a new challenge: campaigning against the country’s national government. In the decentralized United States, transportation projects are almost always partnerships of state and local governments with federal matching funds, he says. But Great Britain’s tradition is government by a powerful central authority.

During his first two-plus years as transport chief, Kiley and London’s new mayor spent much of their time mobilizing public opposition to Prime Minister Tony Blair’s administration. The pair wanted the national government to stop delaying its promise to turn over control of London’s public transit systems to the city government. The transfer finally took place in 2003.

The delay also involved plans, devised before Kiley arrived, to contract out maintenance of the Tube’s infrastructure to four private companies. The so-called Public Private Partnership (PPP) was touted as a money-saver. But Kiley discovered the deals to be nightmares of detail. For instance, they called for mathematical formulae to be used to determine whether contractors were meeting standards for “ambiances.”

“I can’t even spell ambiances,” says the commissioner.

The PPP went forward despite Kiley’s prediction that the contracts will cost the public more and despite Great Britain’s disastrous experience in privatizing its national passenger rail during the 1990s. That handover coincided with deadly accidents, acknowledged collapses in the quality of service, and financial ruin for at least one of the companies involved.

Despite these frustrations, Kiley says of his job, “I enjoy it quite a lot.” And London appears to feel the same way about him. He has received steadfast support for his reform proposals in the British press, and at one public demonstration during the fight with the Blair government city residents carried signs reading “London Loves Kiley.”

Though the Tube and buses seem to an out-of-towner clean and reliable, Kiley says, “This is a job that if it is to be done well will require six to seven years.”

Ed Cohen is an associate editor of this magazine. He also took the picture.