I drove into San Antonio in the middle of July, the incessant sun tracking my winding movements through the Texas freeways. I spent the rest of the month dragging furniture down the hot San Antonio sidewalks of Blanco and Hildebrand. Sweat dripped into my eyes; it was often more than 100 degrees outside and the leaves curled on the incongruous palm trees. From the very first, it seemed an alien place. In truth, I was alien within it. 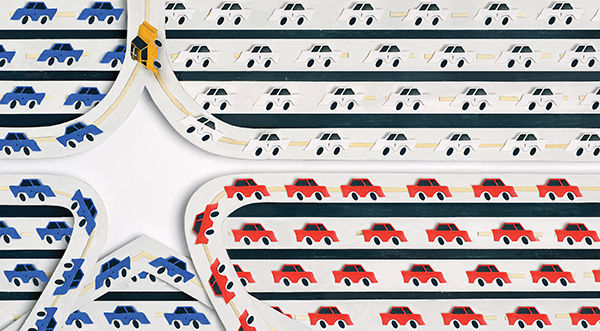 During that year, I only read poetry. I valued what I saw as its emotional economy, the brilliance in the shorthand. I had no patience for extra words. If that seems to you like fear masquerading as taste then you would probably be right. I found myself skipping poems longer than one page, which means I didn’t actually read very many poems at all.

When my boyfriend, whom I loved and who lived 1,300 miles away, would visit, we would drive the hour and a half to Austin, speeding up a corridor of Olive Gardens and EZ-Pays and peeling billboards for an Animal Safari Experience promising “animals from six of the seven continents” and “life on the wild side.” Sometimes on that drive I would wonder if the zebras ever staged a coup. On other days, I just wanted to pick one of the lonely Olive Gardens, eat there, make it mine. On most days, I closed my eyes and slept.

There was one of those drives that I remember particularly. It was the return trip, and the sprawl blinked by as we sat in silence.

We sat in silence because we weren’t speaking. I was young and eager to please, and when someone told me that the next year would be easier, that it was my duty to stay in Texas, I said, “Of course, you’re right,” and bowed my head. When he, after watching me cry on countless Skype calls, after observing my low-humming depression, after listening to me tell him I hated being this far away from him, suggested that I should leave, I said, “Of course, you’re right,” and smiled quietly. I said two things at once; I said nothing at all. He chafed at my inability to make a choice, and our quiet drive was the aftermath of another of these arguments.

My lack of words was unusual. My entire life I had been convinced that I had a preternatural command of language. The evidence had never suggested otherwise. When I was a child, my younger sister did not speak until she was almost 3. I appropriated her voice as if by right. Of course now when we look at old family photo albums, it is she, with the blonde hair and bright face, who seems to command the room. But growing up is a tricky thing, and suddenly you have to say what you mean.

The problem was that I didn’t know what I wanted to say. In fact, I didn’t even know what I wanted. It was no secret that I was miserable. I had come to Texas to be a teacher, with one of those programs with bright promises, but the luster had faded. Those promises were for the outside of a person, the part of a person you hang titles on, and for the delicate hopes of 22-year-olds who want to be told, desperately and almost unconsciously, which way to go. I had come for the job, neglecting the idea of the actual life that would surround it.

It’s not uncommon and perhaps it’s not even ill-advised to tell privileged, promising college graduates that they can be whatever they want to be, go wherever they feel like going. But no one probes further, asks why they want that. Should they want that? I had made my choice without realizing there could be consequences, and those hit me with a gut-punch in January when the wind felt warm and strange.

At the end of the day, this is a simple story of a twenty-something who finds her world upended by a change of structure and rhythm, and a gradual realization that a life involves something more than gathering the most badges. But even when you’re knocked down, there will be an insistent whisper, some unholy combination of inertia, pride and fear, that will tell you that changing course is wrong. And so you’ll sit, staring straight ahead and silent, blinking as the scenery flashes by.

Rachel Roseberry lives in Nashville, Tennessee, where she is completing a master’s program in reading education at Vanderbilt University’s Peabody College.