My wife and I first met Sister Kateri Maureen Koverman in February 1975. Dressed in cargo pants and a loose-fitting cotton shirt, she looked like an expatriate traveling to a foreign country. The dark lines under her eyes indicated that she was overworked and very tired. She was bringing orphans from Vietnam to adoptive parents in the United States, and we helped babysit some of these children at the San Francisco International Airport while they awaited planes to take them to other states.

Due to delays in her plane back to the orphanage in war-torn South Vietnam, Sister Kateri stayed at our house that evening. She was soft-spoken, deflecting attention from herself, but did an astonishing job of helping those who couldn’t help themselves. Despite her obvious fatigue, we stayed up late, discussing the need to help Vietnamese orphans, with her pleading with us to tell our friends and relatives to consider adopting a child from her orphanage in South Vietnam. She had been there for about three years, running the orphanage and processing paperwork for adoptees to get out of the country. 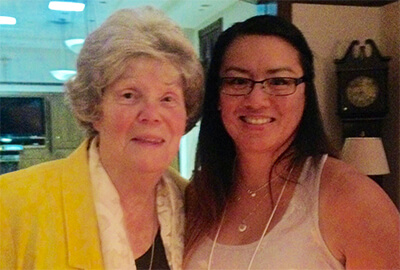 Charismatic, she was on a mission to get as many orphans to adoptive parents as possible and while in the States was trying to convince adoptive parents to take black Amerasians (part Vietnamese and part African American) into their homes. She said these children — thought to represent “American Imperialism” — would be at extreme risk if the North Vietnamese took over South Vietnam.

I learned more about her as the war in South Vietnam was coming to an end that April. My wife and I adopted a daughter who came to America through Operation Babylift, activated by President Gerald Ford to transport some 2,500 orphans from South Vietnam to the United States prior to the country being overrun by the North Vietnamese communists. President Ford authorized Air Force planes to fly to South Vietnam to rescue these orphans.

During Operation Babylift, Sister Kateri was personally responsible (with the help of her staff and volunteers) for getting about 350 orphans from her orphanage to the U.S. She put her life on the line to accomplish this — driving orphans to Tan Son Nhat Airport in Saigon, dodging artillery explosions, rockets and small arms fire, then bribing officials to get children onto airplanes. Friends called her a “dynamo” and said she was “fearless.”

Even though she is a real hero, her service has gone unnoticed. Most people who ever heard of Operation Babylift have forgotten about it. She won’t get the recognition politicians often give to “important persons” or movie stars or professional athletes.

But this unheralded saint, a true friend whom I admire with all of my heart, was a nun in the order of the Sisters of Charity of Cincinnati. She devoted her adult life to being there for others. After her time in South Vietnam, she spent years serving the underprivileged in dangerous places — El Salvador, Ethiopia, Sierra Leone and Cambodia.

She was also the co-founder of Joseph House, a residential treatment facility for homeless veterans in Cincinnati. She ran trauma groups for veteran inmates in local jails and for 12 years was an individual and group psychotherapist who helped U.S. combat veterans, especially those who suffer from post-traumatic stress disorder.. Her most recent organization is called Them Bones Veteran Community.

Her funeral was October 21, 2016. It was attended by a sparse crowd, but beautiful tributes were given. One speaker talked about her dangerous journeys to other countries after her tours in war-torn Vietnam. Her life was truly about helping, and not about recognition and praise. Some of the children from Operation Babylift (now 40-plus years old) came to the funeral. Many had stayed in touch as Sister Kateri held many reunions in Cincinnati for “her” orphans through the years.

This woman was filled with love and care. Her loss is monumental; her impact on my wife and me was very strong. We named our daughter Kateri in her honor, which seemed appropriate since Sister Kateri took her religious name from Saint Kateri Tekakwitha, an orphaned Algonquin-Mohawk woman. Our Kateri now teaches school in an “at-risk” school in California, a fitting tribute from one of Sister Kateri’s children.

She is truly an unheralded saint who will be missed dearly.

William Yaley owns an independent real-estate appraisal company located in his hometown of Mariposa, California. He and his wife, Arlene, raised six children, including Kateri and two daughters adopted from Korea. He is the author of Struggle to Survive, a historical novel about Operation Babylift.