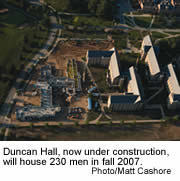 Ask any Notre Dame student, past or present, to share their fondest memory of the undergraduate experience, and it’s a pretty safe bet the story will in some way lead them back home.

Home to their residence hall, that is.

“Your education at Notre Dame really takes place in a significant way in the dorms,” says Peter Tooher, a senior who has lived all four years in the stately campus abode known affectionately as The Manor—Morrissey Manor, that is.

Built in 1925 and situated on the University’s northwestern corner, Morrissey, with its towering brick façade and Notre Dame’s signature collegiate gothic style of architecture, has stood witness as generations of young men have studied and prayed, grown and learned, all the while forging bonds that transcend friendship.

“When you come home, you’ve got your brothers in the dorm,” Tooher says of the rich family life he’s found in The Manor.

With age comes tradition, a word that has come to exemplify all that those who love Notre Dame hold dear. But all those years also have brought a few less-celebrated side effects.

“I always say there are two settings on the heaters—it’s either at full-blast or it doesn’t work at all. There’s nothing in between,” reports Craig Borchard, another senior Manorite.

“My sink gargles back at me,” Tooher adds to the list of minor complaints.

From noisy pipes to paper-thin walls to more substantive—but not dangerous—structural problems, a number of the dorms on campus are in “dire need of renovations,” says Ann Firth ’81, ’84J.D., associate vice president for student affairs.

“We’re talking some pretty fundamental stuff,” she says of the University’s plan to recondition all but one of the existing 27 campus residence halls. Pangborn Hall was completely redone in 2002 and is considered to be in need of no substantial work. The University also will be “decanting,” or shifting students and reconfiguring social, study and living space, to alleviate overcrowding.

“It’s not going to be an abundance of space and amenities. That’s just not our style at Notre Dame,” says Rev. Mark Poorman, CSC, ‘80M.Div., vice president for student affairs. "But it will be more livable space and a better place to create the Christian communities that we’re trying to build in the residence halls."

Renovating the older halls is just the beginning. The master plan to upgrade the undergraduate residential facilities also includes the construction of four new residence halls, including Duncan Hall, a men’s dorm under construction on the west side of campus. It will open to some 230 residents this fall.

The price tag
All this living space will not come cheap. The Spirit of Notre Dame campaign seeks to raise $76 million for the new halls and an additional $18 million for improvements to the others. A hefty price tag without a doubt, but a bill administrators say the University can’t afford not to pay if Notre Dame is to maintain its unique approach to residential life.

“The core of our organizing principle, the rubric under which we bring people together, is the notion of Christian community,” Firth says. “That’s, in some ways, not about what field you’re going to study or what your interests are. It says everybody is welcome, and come be part of this and you’re invited to belong. And that really is sort of a wonderful and distinctive invitation that I’m not sure you’d find replicated in any other place.”

Indeed, Notre Dame’s residentiality has long been one of its trademark characteristics. With a steady 80 to 85 percent of undergraduates living on campus all four years, and the slow but constant growth of the student body itself, it’s no wonder the dorms are bursting at the seams.

If this weren’t Notre Dame, upperclassmen would just get an apartment in town. Here, they say it’s worth it to tough it out.

“I guess one of my friends said it best: ‘We have the rest of our lives to live off-campus,’” says senior Adam Gadzinski. “That’s why so many seniors stay on, because they realize once you grow up and graduate, then you can live away from this place, but while you’re here, to live in the dorms and be in touch with everyone within the campus is something that we don’t want to end, so we keep it going as long as we can.”

That commitment to hall life has led to the current crowding situation in the majority of dorm buildings, which are at 102-percent capacity. Singles have been converted into doubles, doubles have been turned into quads, and study and social spaces have been eliminated altogether to make room for more beds.

The decanting process should reverse much of that damage and ease the crunch. Surprisingly, however, some are concerned that the process might go too far in the other direction and leave the halls feeling a bit too empty for their taste.

“I think the building impresses itself on the young men who live here, so you don’t want to change the chemistry of the hall, which is defined by the building,” says Rev. Ron Vierling, MFC, rector of Morrissey Manor, which holds the title as the squishiest dorm of them all. “We have the smallest living space on campus, and that forces young men to become a fraternity of brothers,” he says.

The daily activities of Notre Dame students, of course, go well beyond the walls of the residence halls.

“When you talk about campus life and residential tradition, you can’t only speak of the dorms,” Firth says. “It also has to do with the facilities and the activities and the opportunities that surround it.”

Goodbye Stepan Center
With the well-rounded nature of the undergraduate experience in mind, the Spirit campaign also includes plans to revitalize student activity space with a $5 million renovation to the LaFortune Student Center and the construction of a $30.4-million venue to replace Stepan Center.

“The structure is deteriorated, and it’s in poor condition now. Most notable, I think, is the roof that has a lot of joints that are just unable to be repaired,” says Father Poorman of the Stepan facility, which was built in 1962. “It’s served the campus well for the past four decades, but its design is less than ideal, particularly by today’s heightened standards. It’s got some structural shortcomings, and major renovations just are not possible at this point.”

In its place—literally, it will stand in the same location at the northeast campus entrance—will be a new student activity and convocation center that will double Stepan’s capacity for concert seating to 3,200, and provide expansive programming space for events ranging from residence hall dances and club meetings to football Saturday liturgies and career fairs.

To the staunch traditionalist who worries all this structural newness might somehow diminish the lore of the storied Notre Dame of yesteryear: Have no fear. The current generation of Domers already is quite committed to maintaining the legacy of Our Lady’s University.

When asked if they’d consider moving to Duncan or another new hall, where the pipes are clang-free and the sinks are still of the non-gargling variety, a panel of six Morrisey men each answered with a firm “No, thank you,” saying they’ll continue to brave the less than four-star conditions to stay in their beloved Manor.

Molly Conway, a sophomore living in Cavanaugh Hall—which is on the master plan list for new windows, bathrooms, lighting and furniture — shares in their dedication.

“I think a lot of people are excited about the new halls, especially students who live in some of the older dorms. For some of them, the need for comfort outweighs tradition,” says Conway, who has an uncle who lived in Cavanaugh back when it was a men’s hall. “I feel like that kind of tradition, how it’s passed through the generations, is interesting and cool to be a part of. But I can see where there’s also some excitement in starting a new tradition.”

One aspect of dorm life that is sure to remain the same, whether the hall is old or new, is the rich religious experience that awaits all who reside within.

“What really is at the core of not just Morrissey but the entire Notre Dame experience is the faith life,” says Craig Borchard. “When I talk to people from other universities, they’re astounded that there’s a chapel in every dorm. And that’s why every dorm is awesome; there’s that common shared experience in faith. That’s what’s really making a difference in people’s lives and where the community is coming from.”

Although the buildings may at times creak or leak, when it comes to the sense of fellowship they find once they pass through the doors, students say there really is no room for improvement.

“The family that you build here in the dorm is really something that lasts through your entire life,” says junior Jonathan Stefely. “That’s what I think is one of the most important aspects of hall life.”

Julie Hail Flory is an assistant director in the Notre Dame Office of News and Information. She can be reached at flory.6@nd.edu.