I once worked with a guy who claimed to be a male witch. A warlock. His name was Stephen. You never called him Steve.

This is at Staples, back in my college days. Stephen staffs the copy center and the computer aisle. Those are his domains, and he rules them as if he’s the wise man on the mountaintop, imparting wisdom to customers asking questions about toner cartridges and paper weight. 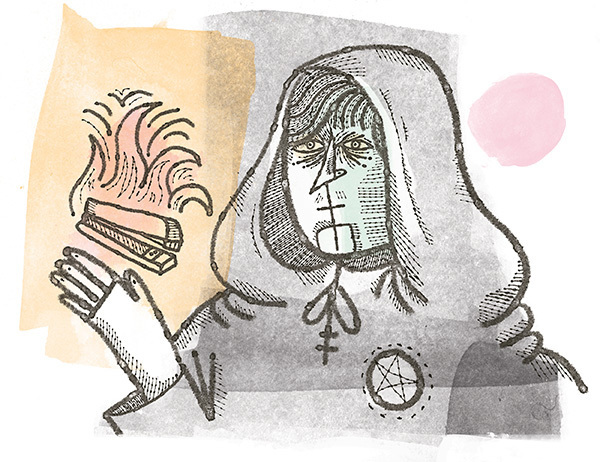 I’m a merchandiser, which is basically a glorified term for stock boy. I work at the store a few days a week, and my shifts are spent in the aisles, straightening and stocking. We unload a truck, and, soon enough, another truck comes. And another. The store is just down the street from my parent’s house, which is where I live. There’s no shame in that. It’s actually standard in the working-class neighborhood where I’m from. We don’t stray far. Going away to school and living in a dorm seems like such an ambitious idea, not to mention an expensive one, so a bunch of us at Staples commute to local colleges, putting in our time until our degrees lead us to better things.

That separates us from the other employees, those without degrees or skills to fill a resume. They’re on a much different course to nowhere in particular. Some of them are young. Their futures are uncertain, but with money in their pockets, even if just a little, they can feel free and adult. Others are further along and soldier responsibilities, and they face the tough reality that the little money in their pockets is no longer enough. There’s Dinesh, who stocks shelves but claims to be an engineer back in India; and Daryl, who says he once played professional basketball in the long-gone ABA; and Leroy, who constantly asserts that he’s working on a plan to get out of the goddamn place; and Brian, who gets his cashier girlfriend pregnant and then applies to be a Staples manager, which means he’ll never leave.

Probably for the first time, I see directly at Staples how one’s circumstances, particularly in regard to education, can shape a life. Not that college always delivers on the promise of a fulfilling career. One manager earned a political science degree, another majored in criminal justice with dreams of joining the FBI, but they both end up peddling pens, push-pins and planners. Paula graduates from community college, but she still seems unsure and lost, having no direction for how to make a life. A cashier, she’s cute and sweet, the type who hands out Christmas cards to everyone in the store. I ask her out, and she says yes, writing her number on one of the cheap napkins the store stocks in our break room.

I don’t know what Stephen’s plans are. He’s a hard man to know. He’s married, but he doesn’t say much about his wife, other than the seemingly random fact that she plays the bassoon. “‘Tears of a Clown’ is the only Motown song with a bassoon,” he informs us, and we nod. Hidden behind thick frames, Stephen’s eyes dart around when he talks, except when they lock in on you, and then they linger too long. Skinny and pale, with dark, frizzy hair, he seems like something out of Rosemary’s Baby. So do his stories. One night he tells us how he’s driving his car, and all of a sudden Satan appears in the backseat. Ferrying him around like a taxi driver, Stephen keeps peeking in the rearview mirror till the devil and all his evilness disappears.

Another time, as he’s driving through Providence, Rhode Island, the night quiet and still, Stephen loses control of his powers and all the city’s lights go out. Darkness falls on the land. Stephen is amazed at what he did, and he means the story to be a cautionary tale. Know what you’re capable of, he seems to be saying.

I don’t know what to make of all this. Why would someone tell such bizarre stories? He sounds crazy. I talk about Stephen with these two guys named Mike, who are both in college and call each other “doctor” for some reason. We know Stephen is an odd one, but he’s also a man of mystery, someone outside the normal. In the monotony of retail and the never-ending barrage of customers to deal with, he’s a welcome diversion. We pepper him with questions. “But how exactly did you turn out all those lights in Providence?” we ask. “I just thought about it,” Stephen replies.

All the while, the trucks keep coming. We pull off the pallets, break them down, take the totes out to the aisles and stock the shelves. And there are other jobs to do, like sweeping the floors, eyeing “suspicious” customers who might shoplift, and taking backbreaking boxes of furniture out to cars for customers who sometimes slip us a dollar or two for our troubles.

Day after day, none of this changes, though the people I work with do. Employees come and employees go. Loyalty at such low pay is not to be expected. On my first day, I start with one other new guy. At lunchtime, he goes out to grab food and never comes back. Still, a core group of people remain, and we do what needs to be done. Dinesh, Brian, the two Mikes, Stephen. I count on them, and they count on me. We grow close. I go to Tom Petty concerts with Brian, and I huddle in the aisles with Dinesh, who asks many questions about the Western pop songs torturing us through the store’s loudspeakers.

Unexpectedly, I also find love at Staples, at least for a little while, as Paula becomes my girlfriend. We eat at diners, hang out at her grandparents’ house and drive around in my 1986 Olds Cutlass, my first car, which my Staples paychecks pay for. I love making her laugh. She gets going until she can’t stop, her eyes watering like she’s crying.

Paula and I keep our relationship a secret from co-workers for months, until we kiss in open sight, again and again, at a company holiday party. Afterward, we’re the talk of the store. People are so surprised. By then, though, our relationship is turning.

I work at Staples for several Christmases, several Back to School seasons, which are the store’s busiest times. The place is so overrun it feels like it was looted. I work hard, and I do my best. I care, though I sometimes wish I didn’t. I watch Stephen, how he disagrees with managers and throws attitude right back to pushy customers. I guess a man who claims to hang out with Satan isn’t going to be bothered by much. He’s far removed from the world the rest of us toil in, removed from the folders, file cabinets, fax machines and all the other crap we sell.

Eventually, with graduation looming, I give my notice. Bob, the general manager, asks me to stay just a little longer, until the next inventory. “I’m asking as a personal favor to me,” he says. Inventory is a slog, a long day that ends in the wee hours, and I can’t stand the thought of doing another one. I hate to let Bob down, but my place is no longer at Staples. Besides, by that point my relationship with Paula is falling apart. Sadly, I discover that all her sweetness is lost too often to anger. She grows frustrated with people, with life, with me. She picks fights. She threatens to break up with me. “You make me so angry,” she tells me. At first I think the issue is me and I’m a terrible boyfriend. I later realize I have nothing to do with it.

Moving on, I graduate from college and begin my career, which comes with a new set of frustrations and rewards. I still live at home and I’m not making a lot, but life feels more open, like I’ve finally found the on-ramp to the highway.

I don’t think of Staples much. A couple of years after I leave, however, the company makes plans to close my old store. I get wind of it and show up for the store’s final night. I expect a big reunion in the aisles of all the people I used to work with, but no one shows up. Carole, a longtime cashier, a survivor, gives the final “Staples will be closing in 10 minutes” announcement, but no one is there to hear it. I think of the many hours I spent working the aisles with co-workers. Our sweat kept the store humming. We built the business, and, in the process, became friends. But that’s all for naught. I don’t talk to any of my old co-workers, and the Staples where I worked is now a CVS, one chain store replaced by another.

I do learn that Paula, still unable to find the on-ramp in her own life, went to work for another Staples store. I stop by once. It feels good to see her, and we ease into conversation like old times, the best old times, when our relationship was still warm and sweet. Almost without thinking, I ask for her number again. She gives it to me but with a sly smile asks, “What do you want my number for, John?” Good question. I really don’t know. In the end, I never call her, and I never see her again.

Sometimes I wonder what became of the people I worked with, especially those without degrees or a direction to some place better. How did their lives turn out? Were they happy? Or more to the point, were they able to provide for themselves and their families?

And what became of Stephen? Is he still weird? Does he still not give a damn? A part of me always wanted to believe his stories. Even now, I want to believe he’s riding in the night, passing through Providence, the dark surrounding him, a man unknowable and untouched.

A resident of Natick, Massachusetts, John Crawford is senior editor of Babson Magazine, the alumni publication of Babson College. His Twitter handle is @crawfordwriter.