About a decade ago, I attended the funeral Mass of a subway alumni friend. It was the only funeral I’d ever attended that incorporated Notre Dame: His coffin marched out to the fight song.

In the ensuing years, after my mother’s funeral and, perhaps more urgently, with the onset of my 50s, I’ve thought about my own sendoff, and my thinking includes Notre Dame. I’m hardly alone and I have wondered how Domers include ND in their final bow. 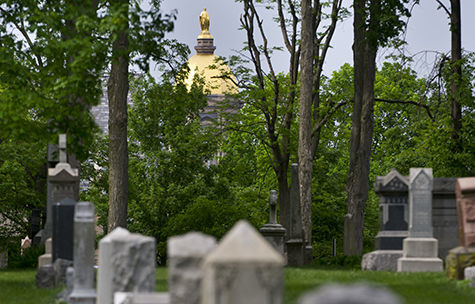 Initially, my idea was simply to have the Alma Mater sung at my funeral. Father Peter Rocca, CSC, ’70, ’73M.A., the rector of the Basilica of the Sacred Heart, says the University frequently gets requests for the music to use in alumni funerals around the country. As a hymn to the Virgin Mary, the Alma Mater is appropriate for a church service, unlike the Victory March, which is not sacred music.

Probably more than a few grieving families have been surprised to have a priest reject the fight song for their loved one’s funeral. (My subway alumni friend must have found a more amenable celebrant.) But the tension points to a primary benefit of funeral pre-planning: keeping such unhappy surprises to a minimum. Notre Dame’s Cedar Grove Cemetery, offers the same counsel: “Prearranging one’s own funeral is an act of compassion,” says its Guide to Prearranging a Catholic Funeral, “sparing your loved ones from difficult decisions during a time of bereavement.”

Beyond that, funeral pre-planning is an opportunity to get in a last word, as it were, about yourself. Notre Dame has been a dominant theme in my life. As a Domer and father of two more, a lot of my heart has gone into Notre Dame and vice-versa. If my funeral is going to express something about me, it will include ND, but I want to — and should — decide how. Similar to what I have tried to create in my will for my family and the causes and ministries I care about, my funeral is another sort of legacy.

Whether your funeral involves ND or not, if you’re going to do your family a favor and plan ahead, Cedar Grove’s Guide contains worksheets to identify preferences for such things as items for burial (e.g., clothing, jewelry), funeral merchandise (e.g., casket or urn, prayer card, etc.), and Mass choices (e.g., readings and readers, music and musicians, etc.).

Planning like this is becoming more common and, if the university connection is important to you, essential. Jay Smith ’09 of Smith-Corcoran Funeral Home in Chicago says families are less likely to make Notre Dame a part of the services on their own unless the deceased has at least mentioned that desire to them.

For Catholics, the central element is the funeral liturgy. The Mass is the Mass, and the options for customizing it are limited. Planners choose from a handful of options in the Church’s Order of Christian Funerals for music and scripture readings that will speak to the spirituality of the deceased.

More flexibility than that depends on your celebrant. “In general the sacred character of the liturgical worship has to be protected,” explains Notre Dame theologian Father Michael Connors, CSC, ’83M.Div. “It’s ultimately more about God, and seeing each life in the context of the Big Story, that is even more important than the deceased.”

Fortunately, outside the liturgy (as well as through some accouterments of the Mass), other possibilities exist for coloring the overall funerary experience at least partly in blue and gold. Floral arrangements, programs and prayer cards present opportunities to bring Notre Dame into the funeral wherever it’s held.

This is a good last favor for my family: to save them from decisions they’d rather not have to make and to prevent second-guessing about what I might have wanted. I can answer for them the questions I failed to ask my mom.

There are many possible first questions in pre-planning. Mine is, Where? Most alumni or subway alumni funerals and burials will be in the deceased’s hometown, but a growing number are not merely including ND but are actually taking their final services back to campus. The choice hinges, in a sense, on one’s definition of home. As Rocca notes, with so much mobility in American society, home can be hard to define. Like other colleges with campus cemeteries, the University realized about 10 years ago that for many alumni in our transient society, their college campus embodies “home” as well as or better than any other place. This revelation informed the University’s Coming Home initiative, which opened the gates of Cedar Grove Cemetery to alumni after “persistent” requests.

Wherever they are held, most funeral services begin with a visitation or wake, typically at the funeral home the evening before. At his funeral home in Chicago, Smith says he’s seen Notre Dame integrated in everything from monogram flower pieces, music and videos to the pictures, hats and other memorabilia placed in the casket.

“It is not uncommon for a family to take over our lounge and refrigerator with their own beverages,” says K.R. Palmer, of South Bend’s Palmer Funeral Homes, “and the celebration of life starts during the visitation.” He adds, tactfully, “Discreetly, of course.”

As Smith describes it, “Oftentimes people will almost tailgate the wake.” (Note to self: Include a Guinness allowance.)

As for the funeral, you can’t get much more Notre Dame than the Basilica of the Sacred Heart. “Any alumni can be buried out of the Basilica,” confirms John Zack, the University sacristan. “Alumni funerals are common.”

Although Zack doesn’t keep track of numbers, when I met him in his office behind the Basilica last fall, he told me there had been two alumni funerals in the previous two days, and he remembered a week between Christmas and New Year’s Day with six. Don’t try for a football weekend, however; the logistics and traffic are too much.

Most Basilica funerals involve relatively local alumni because of the complexities of transporting a body. Cremations are easier to work with in this regard because the funeral doesn’t need to happen right away, but may be planned and scheduled so far ahead. 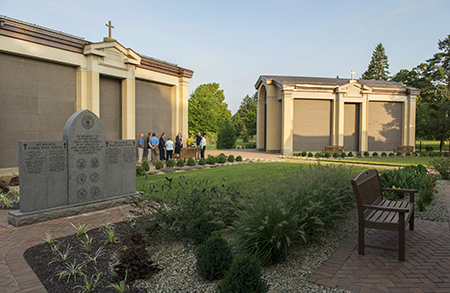 The next step is burial. Not long ago, Cedar Grove annexed land from the Notre Dame Golf Course and constructed the Our Lady of Sorrows complex — four mausoleums on the cemetery’s west side with space for nearly 2,500 deceased within in a footprint that would have held only about 220 in-ground burials. (Since 1977, in-ground burials have been limited to University faculty and staff.) All alumni and some family members are eligible to purchase space in the mausoleums. Roughly half have been sold, says Cedar Grove’s sexton, Leon Glon, though future expansion may open up thousands of additional spaces.

In terms of interment, there are some taboos. Rumors abound of loved ones secretly depositing alumni ashes on campus. The most sensational involve “cremains” allegedly spread on the football field, which, as Glon notes, has been replaced by artificial turf, leaving the purported disposition of such ashes in limbo. The practice of spreading cremains is forbidden by both the University and the Church as not showing proper respect for the body. While he has never dealt with cremains left on campus, Glon has discovered unauthorized distributions in the cemetery — they kill the grass — and has “gotten good at tracking down” the culprits.

Whether intact or cremated, the deceased needs to be in some kind of container. Many universities have licensing agreements with companies that attach school logos to steel coffins for alumni and fans. A little different, Notre Dame has connected with Trappist Caskets, an enterprise of the New Melleray Abbey of Peosta, Iowa, to produce elegant, Notre Dame-licensed wooden caskets and urns in oak, walnut or cherry and graced with an engraving of the University seal or “the Our Lady of Sorrows emblem” — a tableau of the Basilica and the Golden Dome.

Executive director Sam Mulgrew says the monks opened their casket business in 2000 and found it “suitable to their spirituality.” In their modern but traditional factory, a dozen monks and 20 laypeople handcraft each casket, which they sign before applying upholstery. A monk blesses each item before it leaves the premises. Also, Mulgrew notes, “for every Notre Dame casket or urn used, we plant a tree as a living memorial and say a Mass in memory of the deceased.” The Notre Dame partnership, established in 2007, is still a small part of their business, Mulgrew says, accounting for “around 15 to 20 caskets and urns a year.” Once limited only to alumni interments at Cedar Grove, non-alumni and people wishing to be buried at other cemeteries may now purchase Trappist Caskets’ Notre Dame products.

Should you pay a visit to Cedar Grove, you’ll find a few tombstones engraved with the monogram or “interlocking ND,” the Golden Dome or the Grotto. With permission from the University, people may use such licensed imagery on their grave markers wherever they are buried. The request form is on Cedar Grove’s website. However, taste and propriety govern, and the University deems the leprechaun inappropriate. Glon has final authority over all imagery, but says requests for approved images are fairly rare. In 2015, he only received about two dozen applications from around the country.

The graveside or committal service is the final step in the order of Catholic funerals. At Cedar Grove, “services here are done in a strictly Catholic tradition,” Glon says, but, again, not on football game days. A few times in his 27 years there, Glon has witnessed Notre Dame faithful singing the Alma Mater or recruiting a band member to play it, but the service is usually unembellished. “Most just seem to be at peace with the thought of being laid to rest here.”

The committal is typically followed by a meal or reception. Whether on campus or away, the ND connection might continue. In South Bend, Palmer says, families often choose places such as the DeBartolo Performing Arts Center, a favorite campus dining hall, or the Morris Inn — a list to which Gregory Kaniewski of South Bend’s Kaniewski Funeral Homes adds McKenna Hall on Notre Dame Avenue and Legends of Notre Dame.

Considering all these options for including ND in my sendoff, I recognize that some are far pricier than others. I’m still only slowly making my own decisions. But I’m committed to the planning. This is a good last favor for my family: to save them from decisions they’d rather not have to make and to prevent second-guessing about what I might have wanted. I can answer for them the questions I failed to ask my mom.

Moreover, why not include Notre Dame and other important aspects of my life? It will be my last chance for a last word. And, hopefully, there will be an audience.

My family, somewhat to their chagrin, knows I’m thinking about my funeral and — maybe unaware of the huge favor I’m doing them — wishes I would do less of it. This description applies particularly to my teenage daughter, who has traveled with me to — and avoided — some of my research stops.

Which leads to a story Glon tells about the ups and downs of pre-planning:

A family was on campus for a football weekend. Dad and the two daughters were Notre Dame grads. Unbeknownst to their children, Dad and Mom stopped at Cedar Grove to choose their spots in the mausoleum and then called their daughters to come to the cemetery without saying why. When they arrived, Mom and Dad showed them where they planned to be interred, saying they thought it was an appropriate place since the girls came to campus so often and would be able to visit them.

Hearing their parents’ plans, one daughter was pleased, and the other cried. Coming home, indeed.

Patrick Gallagher lives in Aberdeen, South Dakota, where he works for a community development nonprofit organization.