A fog of grief shrouded Brenda Brown. After her husband, Dean Brown ’92, died unexpectedly of a pulmonary blood clot in 2012, she operated “on autopilot,” trying to orient herself and her daughters, then 14 and 12, to an unwanted new reality.

Dean Brown, a former Notre Dame offensive lineman, was a gregarious bear of a man, known as “Big Happy” and as true to that name in private as in public. “The sweetest and the kindest,” Brenda says. 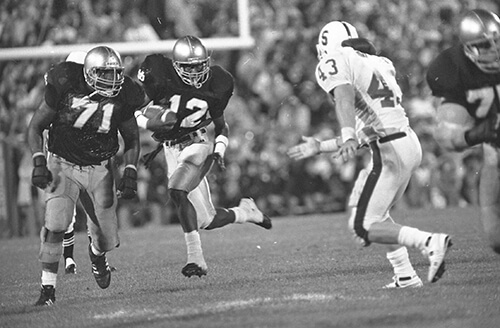 He had been principal at Cleveland’s Nexus Academy for only a few months, having moved closer to his Canton, Ohio, hometown after a decade as dean of students at a Washington, D.C., charter school. A favorite among his teammates for his buoyant personality, Brown and the rest of the 1988 national champions were especially upbeat as the 2012 Fighting Irish were on the cusp of another title.

From the ambulance taking him to the hospital for what he thought was a respiratory infection, Dean made plans with his brother to attend Notre Dame’s upcoming national championship game. Within hours he was gone, leaving a hole much bigger than even his 6-foot-4, 350-pound run-blocking frame.

For Brenda, part of the strain was financial. She had been a stay-at-home mom or worked only part time for most of their 19-year marriage. Things were not desperate, but making the payment on Dean’s van would be a challenge.

A representative of the Notre Dame Monogram Club reached out to offer condolences and inform her of a potential source of assistance. Since 2005, the club’s Catastrophic Relief Fund had helped former Notre Dame athletes and their families who found themselves in need.

“It gave me such a sense of comfort, the amount of people that reached out to us from Notre Dame,” Brenda says. “Just that they cared, because at that time you just kind of feel lost.”

The fund grew out of a conversation among former football players Mike Heaton ’68, ’71J.D., Jim Seymour ’69 and Tom Reynolds ’69. They wanted to raise money to help defray medical costs for their teammate Pete Duranko ’66, who was suffering from ALS. He died in 2011.

“Not only did we help him out,” Heaton says, “but when he passed away, we raised more funds and paid off his mortgage so his wife didn’t have to worry about the house anymore.”

From the earliest discussions, the planners’ ambitions grew from the inspiration to help Duranko and his family to include any Notre Dame monogram winners facing financial troubles. Heaton, a lawyer and then a Monogram Club board member, helped establish and manage the fund.

Members apply and, to assure privacy and legal compliance, a third-party administrator reviews the claims and determines the amount to be provided. The fund does not issue money to individuals, instead paying creditors directly.

More than 10 families have benefited, receiving help to rebuild after Hurricane Katrina, to cover prohibitive health-care costs and, like Brenda Brown, to preserve financial security after a premature death.

Although Heaton is no longer directly involved, the Monogram Club renamed the fund after him last year, recognizing his decade of dedicated effort to increasing its reach.

“I felt very strongly about it,” Heaton says. “I think we’ve done some good, and I hope we will do a lot more good in the future with our monogram families.”

He considers the fund a natural extension of Monogram Club services, which have expanded significantly in the past 25 years. The club’s history dates to 1916, and a centennial celebration will take place during the weekend of the October 29 ND-Miami game. Among the highlights will be the presentation of the club’s Moose Krause Distinguished Service Award to Alan Page ’67. An All-American defensive lineman at Notre Dame who had a Hall of Fame NFL career, he founded the Alan Page Educational Foundation in 1988 and spent 22 years as a justice of the Minnesota Supreme Court.

Envisioned as a way to maintain ties among former varsity athletes — and, for many years, basically a social group — the Monogram Club has evolved into a kind of service organization for athletes, past and present. The club sponsors events and awards, supplements financial aid for children of monogram winners and subsidizes cultural events for varsity teams to attend while on the road for competitions. The Heaton Fund fits comfortably within that portfolio.

“This is a continuation of services that we can provide, this family of ours,” Heaton says.

A family that the Monogram Club tries to knit together as closely as the interlocking ND.