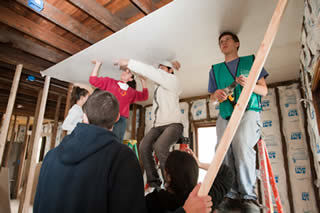 About 300 miles northwest of South Bend, a man dubbed “Mack Attack” welcomes me into his home — or what’s left of it, anyway. His wild eyes flash behind giant round glasses, and a long gray ponytail chases his thin, denim-clad figure as he hops from room to empty room.

“So you know those Notre Dame kids?” he asks with a grin. “I’ll tell you what, they worked me to death!”

It’s hard to imagine anyone working Mack Heck to death. A retired ironworker and motorcycle enthusiast from Cedar Rapids, Iowa, Heck is as spry and mischievous as a 10-year-old boy underneath his bushy white goatee.

Heck’s home of 21 years, like thousands of others in the low-lying, working-class areas of Cedar Rapids, was nearly destroyed in June 2008 when the Cedar River crested at 31.12 feet, 19 feet above flood stage. Water covered more than 10 square miles of the city, devastating areas that no one ever expected would flood.

Heck credits his progress in part to a group of Notre Dame students who spent last spring break helping him gut his home. They tore out rotten boards, shopped for new doors, and “spitballed” ideas back and forth to create a blueprint that is now a reality.

“You tell those girls they got their 8-foot bathroom!” Heck crows. He pulls me into the bathroom that his female helpers insisted he extend two feet for the sake of his two teenage daughters.

Mack Attack isn’t the only person in Cedar Rapids still talking about “those Notre Dame kids.” On three separate trips, ND students have made an impression on Cedar Rapids residents, ranging from Heck to middle school students to local ND alumni. A group of 20 students first helped with flood relief during their fall break week in 2008. Twenty-two mostly new ND faces returned for spring break 2009, and this October, with the addition of over half the trombone section from the Notre Dame Marching Band, 42 students made the trip for fall break.

Service trips on break weeks are nothing new for Notre Dame. What’s unique about these groups is that their trips were initiated, organized and led by the students themselves, in close partnership with the Notre Dame Club of Cedar Rapids and Iowa City.

It all began when Steven Warner ’80M.A., director of the Notre Dame Folk Choir, visited Cedar Rapids in August 2008 to speak at the Cedar Rapids/Iowa City Club’s student sendoff event.

While there, Warner went on a tour of the city’s most flood damaged areas, including Saint Wenceslaus Church. “[Warner] said, this is a beautiful church, and our folk choir should sing here someday,” John Casko, a 1987 ND graduate and club president, reports.

At a campus retreat later that month for the service commissioners from each dorm, then-sophomores Noelle Hilmer and Hugh McDermott heard Warner’s talk about the devastation in Cedar Rapids.

“He asked the group if we would consider organizing a trip to go help with the flood recovery during fall break. I couldn’t get it out of my head for a week,” Hilmer says.

Hilmer and McDermott independently contacted Bill Purcell, an associate director at the Center for Social Concerns, who had them get together and start planning a service trip. The two recruited friends from their dorms, Pangborn and Carroll, and worked with the dorms, the Center for Social Concerns, Campus Ministry and University Transportation Services to get funding and settle any liability issues. They also contacted Casko, who emailed his club members asking for help providing lodging and meals for the students.

“They found that there was help needed here in Iowa, and they said, ‘We’re going to come help you.’ They had to jump through all kinds of hurdles and hoops, and regulation this and signing off for that,” Casko says. “And they just did it all. There was no stopping them.”

Arriving in Cedar Rapids just four months after the flood, the first group worked primarily on removing debris from homes and other buildings, such as Saint Wenceslaus Church. The Notre Dame students, along with countless other volunteers, helped haul away 150 tons of rubble, bucket by bucket, from the parish.

“The first two groups did a lot more of the dirty, mucky gutting,” says junior Cody Borgstrom, the leader of the October 2009 trip along with sophomore Maya Younes.

On this trip, many of the ND students concentrate on rebuilding efforts. They hang drywall, install insulation, paint and do other tasks to get homes ready for their owners to finally return.

“If we leave our drywall out in the rain, will it turn into ‘wet wall’?” one student quips, as we head out to a site one drizzly morning.

As it turns out, however, this block of homes is still in the gutting stage — a testament to how much work is left to be done in Cedar Rapids. We spend the morning ripping out floorboards and scrubbing walls, stripped down to their wooden frames, with bleach to prevent mold growth.

It’s dirty work. Everyone wears disposable rubber gloves, mouth masks and safety goggles as they crouch down to scrub the walls in this particular home. Despite leg cramps, backaches and even a nick or two from exposed nails, no one complains. Instead, the students pass the morning cracking jokes and singing mangled versions of Disney songs through their masks.

“They came with incredible enthusiasm and joy and selflessness,” Casko says. “All of that was infectious.”

So infectious, in fact, that the Cedar Rapids/Iowa City Club embraced a service mission of its own — as Casko puts it, doing service to the people who are doing service. First, they helped arrange for the students to stay at local middle schools — the first group in the wrestling room at LaSalle Middle School and the last two groups at Regis Middle School.

“They had keys to every room but one,” Regis Middle School Principal Rick Blackwell says.

Twenty-plus college kids left unsupervised overnight with access to computer labs, a gymnasium, a school kitchen, stair banisters . . . sounds like a bad teen movie. When I mention my vision to Blackwell, he laughs and says, “I am a very trusting soul. There was never a doubt in my mind that everything would be okay.”

Hilmer, who went for both her fall and spring break, says, “After work we would be tired, but we always found the time to play multiple games of volleyball, basketball, et cetera, until the wee hours of the night.”

During a lunch break one day, several of the student work groups come back to the school to visit study hall, which is being held in the cafeteria since the regular study room is now the ND males’ sleeping quarters. They split up, a couple of Notre Dame students squeezed into too-small seats at each table of middle school students. At first, everyone is shy and quiet. But soon, taunts about the still-stinging loss to USC, a debate over the coolness of a bobble-head Jesus, and Xbox Live challenges fill the air — along with more serious conversations about college life and why the ND students chose to come to Cedar Rapids on their fall break.

“It’s great to give them our perspective, as college students, and also since we come from a Catholic university, that might attract them, in terms of what their future goals are. I hope we can influence them in that way,” Younes says.

In the evening, the smell of notebooks gives way to a slightly spicy aroma as members of Saint Patrick’s parish cook up chili in the cafeteria. They are one in a long line of groups and individuals who volunteered to provide food for the students. The kitchen is full of goodies donated by the Cedar Rapids/Iowa City Club members and local Catholic organizations.

Tonight the students are all receiving new “IOWA” T-shirts in the color of their choice, although the overwhelming majority picks Irish green. Casko gets a wild round of applause as he stands up to give them out during dinner.

“John Casko has just been an amazing resource and more than that, a friend and a guide,” Younes says.

“There’s so much that they [the ND club] are offering us, we can’t do everything,” Borgstrom adds. One offer they did take the club up on is an outing to a local corn maze. Casko handed out small LED flashlights and went along to pick up the bill, footed by various club members. Other activities organized by the club have included Monday Night Football in a club member’s Irish memorabilia-filled basement and dinner at a famous burrito joint in Iowa City.

“I believe that this kind of interaction and relationship between the ND Alumni and current students is extremely vital,” Hilmer says. “The spirit of community and service does not end when we leave Notre Dame, and these opportunities of alumni and student interaction not only give the students the network of support they need, but it also gives the Notre Dame alumni the chance to remain involved in the Notre Dame community.”

Hoping other alumni clubs might follow Eastern Iowa’s lead, the alumni association suggested that Casko give a presentation at last April’s Alumni Senate on how his club supported this student service project in Cedar Rapids.

Casko calls his involvement a life-changing experience. “I didn’t get the message when it came to service at Notre Dame, and I’m sure that was my fault. But boy, I got it this time,” Casko says. “And the thing that really impacted me was that I got to see the reactions from the people here in our community.”

People like the parishioners at Saint Wenceslaus, who were able to host the Notre Dame folk choir last spring.

People like Blackwell, who says he can’t wait to have the next group of Notre Dame students take over his school.

And people like Heck, who still carries around a worn black datebook. On one page, large print reads “BEST FRIENDS HERE,” and on the opposing page are the names of the five ND students who spent their spring break helping him save his home.

Jessica Farmwald is from Wakarusa, Indiana, and was the 2008-09 editor of Scholastic.