If the hundreds of people who walked into Washington Hall weren’t already chanting “U-S-A!” in their heads last Tuesday, April 18, around noon, the organizers of the “special naturalization oath ceremony” did everything in their power to change that. The scene of the theatre was set with the sights and sounds of independence — marching drums and flutes and pictures of great American moments and places: the 1969 moon landing, the Golden Gate Bridge, Mount Rushmore, firefighters raising the flag at Ground Zero on September 11, 2001.

I am no American. Yet. That’s regrettable, for Americans are a remarkable people. Your accomplishments are astonishing. Your attitudes towards work, family and freedom are known around the world. But, while most Americans and their ancestors are responsible for that impression abroad, the vast majority of you didn’t choose to be Americans, your citizenship no more than a coincidence of birth. 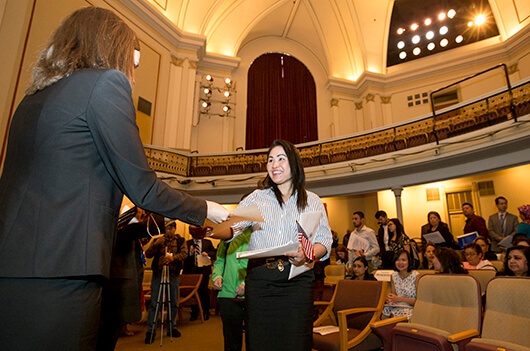 Of those people who walked into the theatre that the French-born Father Sorin named after the United States’ first president, 100 were different from you. They walked in as foreigners. Now they are Americans, by choice.

With a “Hear ye!” times three, the session of the U.S. District Court of Northern Indiana was opened. Lisa Baumann, the immigration service officer in charge of presenting the class of soon-to-be citizens said, to the amusement of everyone, “When I call your name please stand, and if I mispronounce it please stand anyway.”

“Don’t you wish everyone had a simple name like DeGuilio?” Judge Jon E. DeGuilio asked the group. As each person stood, some had with them the flag of their new country.

South Bend mayor Pete Buttigieg, the ceremony’s keynote speaker, who could have easily made the same joke as DeGuilio, acknowledged that it is not easy to obtain naturalization, and that it requires patience. “I am on the very last step of a very long road,” he said, but citizenship is a privilege and that is why it is difficult to get.

The son of an immigrant, the mayor spoke of how his father, Notre Dame English professor Joseph Buttigieg, had once attended a naturalization ceremony like this one and taken the Oath of Allegiance, promising to support and defend the Constitution and the country, while ‘absolutely and entirely’ renouncing allegiance and fidelity to any foreign princes or governments —although, I note, the United States does allow dual citizenships.

“America gets stronger today by you being here,” Buttigieg said. Then the mayor reminded his new countrymen that they will have to share the burden of leadership as members of what he called the United States’ “board of directors.”

Despite the current immigration debate every speaker appeared to agree that welcoming these 100 new citizens is a positive thing. The University was founded and built by immigrants, noted theology professor Timothy Matovina, and Knute Rockne, one of the greatest football coaches of all time, also came from across the sea.

The newest Americans might have thought the ceremony also celebrated the end of their stack of paperwork, but they would soon learn that additional applications were required to secure the right to vote and to update their information with the Social Security Administration.

One of the naturalized citizens, who has been in America for six years, was Aminata Diatta. She first came to visit Purdue University, where she is now a graduate research assistant in the Department of Food Sciences.

“I am very happy and relieved that it’s over,” she said. Diatta, originally from Senegal on the western coast of Africa, won her permanent resident status through the green card lottery.

Sam Centellas, executive director of La Casa de Amistad, which co-hosted the ceremony, remembered how his father had decided to become an American — an important decision for the whole family. “Your children will grow up in this country and be American citizens because of your hard work," he said.