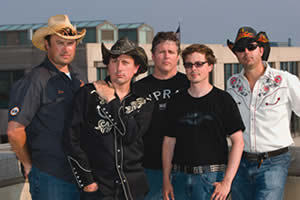 The Surreal McCoys bill themselves as the top cowpunk band to ever come out of Notre Dame Law School. If you want to argue about that, take ’em to court.

A few times a year, however, the lawyers shift into travelin’ man mode and head for a good-times performance at a city near where one of their members lives. That’s where the fun really begins. That’s when they become the Surreal McCoys (aka Cletus, Billy Saul, Clint, Goat Boy and Elvis McCoy).

The McCoys bring cowbells. They bring funny things to wear. And they bring people up on stage to share in their musical havoc of alternative country, which ranges from re-imagined covers of Johnny Cash or The Clash or Hank Williams to their original songs, such as “Is This A Private Fight (Or Can We All Join In)?” Their motto: Play it Loud, Play it Plowed.

Despite the hijinks, these attorneys are quite serious about the band and about songwriting. “All of us, right down to our drummer, seem to have a certain creative push to develop and create new music,” Tim Smith says in an email.

That push was evident during their undergraduate and law school days, when the various group members played in different bands. They got together as the Surreal McCoys in 1992, then split when Huey and Tim Smith headed for their respective law careers. In 2005, the two attorneys — Huey working in Washington, D.C., and Smith in Traverse City, Michigan — contacted the other three band members and suggested a reprise of the group. From Feddersen in Los Angeles, Ryan in South Bend and Patrick Smith in St. Paul, Minnesota, they got a yes, and the group was reborn.

To make the cross-country band work, writes Smith, the members agree on a set list for an upcoming show, practice on their own, then meet the day before the show and run through the performance several times. Beer might be part of that.

Live shows at various spots in the country (they were in St. Petersburg, Florida, in May) aren’t the Surreal McCoys’ only claim to musical fame. Last year the group released a 14-track CD, The Bottle & The Gun, available on iTunes, and this year signed a licensing and distribution deal with Song Stew records.

The band also makes a splash on its website, thesurrealmccoys.com, with photos, lyrics to its original songs, audio from a 2006 appearance at the Viper Room in L.A., tour dates and various strange factoids members happily share with fans.

One thing they definitely want fans to know is where in the country they will pop up next. For the remainder of 2009, the Surreal McCoys’ not so aptly named Three Chords and a Cloud of Dust: One Stop World Tour includes an August appearance in Minneapolis/St. Paul, a show October 14 at Traverse City and an October 15 gig in Chicago.

The big date is a return to their roots, an appearance at Simeri’s Old Town Tap in South Bend on October 16, 2009, the night before the ND-USC game. “We want to make sure any ND fans coming in for the biggest game of the year know about this show,” says Tim Smith. Now you do.