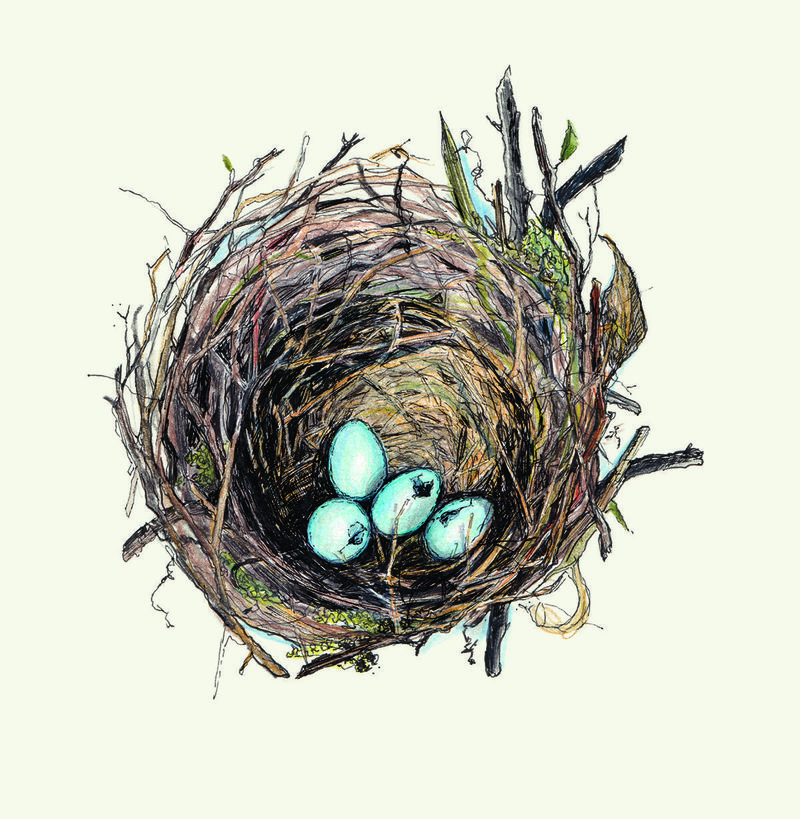 Mike first noticed what would become the nest. We thought yard debris had caught on the light above the garage during a strong April thunderstorm. Mike pulled it down, but soon the twigs were back, more fully formed. A small, rounded bowl nestled on the light, sheltered from rain and reasonably safe from predators.

A day or two later, returning from one of our daily walks, we saw Mama Robin for the first time, perched atop the nest. For a few days, she’d get spooked and fly away when we opened the garage door, but she soon got used to us, unruffled as we came and went.

Once when she wasn’t in the nest, Mike grabbed the ladder and climbed up to look inside. “Ooh, lots of eggs.” He snapped a few pictures, which I eagerly inspected. Four vividly blue eggs. No Instagram filter needed.

Then again, I reasoned, at least someone at this house can get pregnant. Maybe this was a good sign.

Our baby, miscarried at nine weeks one year earlier in March, had been conceived in our rental home before we moved. Carol, our landlord, had volunteered while we were house hunting that it was “a fertile house,” reciting a litany of previous tenants who’d had babies while living there. No such luck for us.

Maybe the fertile robin’s presence at our new home was auspicious. I soon felt protective of her and comforted by seeing her sitting on her eggs. I’d panicked briefly after we’d shared the nest picture with family and been cautioned: “Don’t disturb the nest. Mama won’t come back.” Later that day I looked out the back door to see that she still hadn’t returned. What if our nosing around scared her off and she was gone?

I breathed a sigh of relief the next morning to see her back in the nest. A little research revealed that the “don’t disturb the nest” warning is a myth. She wouldn’t abandon her babies so easily.

We started checking on her even when we didn’t need to go outside. “Mama’s still there,” we’d reassure each other. When the temperature dipped below freezing one night, I worried about the eggs. Would they be warm enough?

I also worried to learn that blue jays are one highly intelligent predator that will snatch eggs if given the opportunity. One article admonished readers not to check out the nest while jays are watching you; you might lead them to their next meal. My stomach sank as I recalled the two jays I’d seen in our trees the day before, surely seeing us climb the ladder to peek in. There had been four eggs then. I prayed that was still the case.

My reading also told me it was unlikely all of the babies would survive. I tried not to think too much about that.

After 12 days, we started seeing Mama Robin perched on the nest’s edge to drop in food. At least some of the eggs had hatched successfully.

We kept climbing the ladder to snap a few pictures whenever Mama and Papa Robin were off foraging. I always counted the babies, relieved each time I found four alive and growing. They began to look more and more like birds instead of just eyes and beaks, and we marveled at how much they had grown, filling up the nest. I squealed to see them crane their necks up, beaks open wide whenever a parent flew up with a worm.

The day before Mother’s Day, which I was dreading as yet another cycle passed by without pregnancy, we came back from our walk to find a fluffy fledgling on the concrete outside the garage door. It was lying on its side, flapping a wing and moving its legs but not righting itself. We wondered in sadness what to do. A Google search returned conflicting guidance as to whether we could or should do anything to help. Some articles suggested quickly returning the bird to the nest. Seeing it so helpless, we decided to try.

For a while, we seemed to have made the right call. The parent birds continued to bring worms, and we saw four little beaks straining up to be fed. Then a bit later, we saw a baby — no doubt the same one — stretching its wings, leaning perilously far out of the nest. While one parent stood on the edge feeding the others, the fledgling hung briefly by its feet, then dropped straight down. This time it lay just beneath the nest, not moving. Again, we returned it, hoping we could help it survive. This time it would not.

Distraught, we stood by as the little jumper lay struggling, and when the parents returned with worms, they no longer tried to feed it. Eventually it stilled, and the other three babies, squirming about in a space they were rapidly outgrowing, settled it to the side with its little legs sticking straight up, a morbid reminder of how we had interfered with nature.

When we awoke on Mother’s Day, the little feet of the dead fledgling were still visible, but by midmorning, they were gone. One of the parents had laid the tiny body in the center of the driveway.

More research revealed our error: If a true baby bird, a featherless nestling, is found on the ground, it can help to put it back, as it probably fell by accident or was jostled out. But once a fledgling with feathers leaves the nest, it won’t return. As National Geographic put it, if it’s ugly and ratty looking, put it back; if it’s cute, leave it alone. Chastened, we agreed we would not try to return any other jumpers to the nest.

When we awoke on Mother’s Day, the little feet of the dead fledgling were still visible, but by midmorning, they were gone. One of the parents had laid the tiny body in the center of the driveway. When I crept closer for a last look, Mama and Papa Robin buzzed near my head a couple times until I retreated to the deck.

I know I shouldn’t anthropomorphize wild animals, and I knew the odds that each of the young birds would survive were small. Yet I couldn’t help but think of the statistic I’d heard far too many times in the previous 14 heartbreaking, frustrating months. One in four human pregnancies ends in miscarriage, including ours. And now one in four baby robins had died on our watch.

Over the next few days we waited for the others to fledge, and that Wednesday we learned just how prematurely the first bird had jumped. That evening I opened the back door to peer out at the nest. Soon after Mike joined me, through some divine coincidence and to our delight, the first fledgling flew successfully from the nest.

It glided down to the grass beyond the driveway, then hopped off with cautious determination across the grass and onto the neighbor’s lawn. One parent landed nearby and observed as the little bird ventured further and further away. Eventually it reached a patch of foliage and hopped inside, out of sight.

We knew we were lucky to have been there to see it and that we shouldn’t expect to be so fortunate with the last two. When I looked out the next morning, I saw we had missed the flight of the second fledgling. I stood at the back door, observing the third and final bird for several minutes. It would fluff up its feathers and fool me into thinking it was about to go, then settle back down.

After weeks cooped up with its siblings, it appeared to enjoy having the nest to itself, no competition for the worms its parents continued to bring. We kept a close eye on it, and toward evening it finally took flight. We were happy to have seen two out of three survivors leave the nest, but also sad. After weeks of our daily monitoring, the nest was now empty.

I knew it was unlikely we’d ever know how many of these birds actually made it in the world, and that was all right. This way I could believe they all survived to adulthood. And perhaps someday we too will be empty nesters, having raised children in this house and sent them out into the world. I still hope that will be the case.

Mary Mathes is a market researcher in Cincinnati. She and her husband are expecting a son in August.