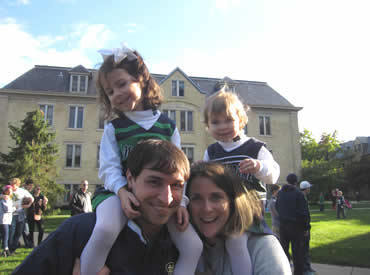 Eight years ago I made a bet with my husband’s best friend, Casey. We were on a double date and from what I recall were amid yet another preseason conversation where Dan and Casey, the eternal Notre Dame-football optimists, were spewing outlandish statements about Notre Dame’s upcoming season. They said this year the Irish would definitely beat Michigan and USC. With a new coach and great recruits, undoubtedly this season the Irish could and would make a BCS game.

Believe me, I have been an Irish fan since birth. I still vividly remember watching the 1988 Miami game with my dad and honestly don’t know if I have ever seen him as happy as when the Irish won. In 1991, when my 6th grade homeroom teacher was a University of Tennessee graduate, I brought Notre Dame flags to school the Friday before the UT game and led my entire homeroom in a rendition of the fight song.

But in 1993, things changed. My entire family traveled to South Bend for the Boston College game and witnessed the loss that cost Notre Dame the national championship. When BC made that field goal, my heart broke and part of me found it hard to be optimistic year after year. Thus, at that now infamous dinner with Casey, I made the bet. I wasn’t even married yet, but with the utmost confidence I declared: “Casey, I bet you $100 that I will have three children before Notre Dame wins a national championship.”

For most of the past eight years, my bet has seemed relatively safe. In fact, almost guaranteed money. There was the promising season of 2005 — when Dan and I were married — where Brady Quinn and Charlie Weis brought the Irish to a BCS game and many argue could’ve been in contention for the national championship if the “Bush push” had been penalized correctly. But when the Irish were handled easily by Ohio State in the Fiesta bowl that year, I remained confident that a national championship was still years away.

Casey and Dan still started each season with the utmost assurance that this could be the Irish’s year. In 2006, pollsters agreed, ranking the Irish No. 2 in the preseason polls. But once again, in a BCS bowl game against LSU, the Irish were exposed; proving ending the season at No. 1 was not in the cards just yet.

In 2007, Dan and I welcomed our first daughter, and two years later we welcomed our second. The Irish had moved on from Coach Weis to Brian Kelly, and I thought that would give me at least a few years of transition to have one more child and win the bet with ease.

In late July, Dan and I were thrilled to learn we were expecting our third child. I’d be lying if I said I didn’t think about the bet. Our third daughter is due April 3rd, and I knew before the beginning of the season that this would be Casey’s last chance to win the $100. I still wasn’t too worried. The Irish’s schedule was the hardest in the country: Michigan. Stanford. Oklahoma. USC. Not to mention possible let-down games against BYU and Pittsburgh.

Then came the 2012 Irish. Te’o. Tuitt. Eifert. Golson. Nix. I began to wonder if Brian Kelly was going to do what Lou Holtz, Ara Parseghian and Dan Devine did, and win a championship in his third season at Notre Dame. As a double Domer myself, it was impossible not to show excitement for this year’s team. They are likeable and confident. And while I know there are criticisms of Coach Kelly out there, ultimately I like his “Right Kind of Guys” mantra. Unlike many of his predecessors, he doesn’t just spew promises or claims; his proof is on the field.

So here we are, the Irish are about to play Alabama for the national championship, and I am starting my third trimester. I am so excited to meet my new daughter in less than three months — if Dan has his way, we might even name her Brianna Kelly. This bet has come down to the wire, and while I am a hyper-competitive person, this is one time I hope to lose. I will be thrilled to give Casey $100 on January 7th. GO IRISH.

Laura Soldato lives in Kentucky and is a freelance writer for the Lexington Herald-Leader. As an undergraduate, she wrote for The Observer.