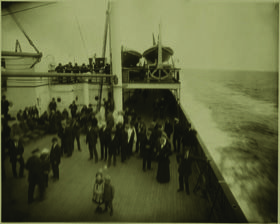 A 13-year-old girl is in the belly of a steamship as it cuts its way through the Atlantic Ocean, the latest in a line of exploration stretching back to Phoenicians who sailed to claim sea creatures holding a precious purple dye. A 38-year-old man, the son of Irish immigrants, descends into the cold Pennsylvania earth to mine amid a swirl of choking grime and dust, looking for valuable anthracite coal.

She is joined by more than 1,000 other passengers — Irish, English, Swedes, Germans, Russians, laborers, tailors, servants, peddlers — but is still alone, the first of her immediate family to head to America. Born to Irish parents, she had traveled before from home in England to Dublin by boat, visiting her grandmother, a matron at Trinity College, and enjoying cinnamon toast heated by the fire. But the girl’s father died and her mother, Mary, has four children. Mary has — or, rather, had — brothers, but they disowned her, disappeared from her, because her husband had been in the British Army.

The man is joined beneath the ground by another miner, an Italian bachelor from a town more than 100 miles away. Mines always had their own transients, too — mules and the rats that followed them in, and the microscopic variety, germs of never-ending colds, tuberculosis, infections. And there was the company of sounds from the dynamite, the jackhammers, the drills, all creating a path for the man to provide for a wife and two young daughters. 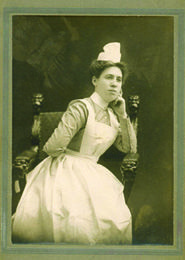 The girl, Sadie Haviland, travels past a coastline of cold sea winds and rain-weighted skies. It is June 4, 1892, and the ship enters the New York harbor before a maze of tenements bursting with ambition, the city’s iron and steel allowing new buildings to stretch to new heights. The man, Thomas Walsh, works beneath the unseasonable frost of the northern Pennsylvania coal basin. It is May 3, 1911, and he brings up the fuel for a growing country, sending the rocks to railroad cars traveling lines owned by industrial titans.

The Irish would have life and they would have death in America. Before Sadie, there stretched decades. Before Thomas, there were only moments.

Sadie would study nursing and marry Thomas Carey, the borough clerk and librarian of East Newark. When he died of an infection, town officials would offer her the job, one she kept in spite of verbal harassment from men who believed a woman shouldn’t have the position during the Great Depression. Frank Hague, the boss of the Hudson County Democratic machine, spread the word that there was a “brick wall” behind Mrs. Carey, and the jabs ended. Seven years before her death, Sadie would see John F. Kennedy become president of the United States.

She also raised children, one of whom was Anne, who grew up and gave birth to Maryanne, who is my mother.

Digging in the mine, Thomas would have been straining to listen. With helmet lamps limiting the miners’ peripheral vision, problems underground could often be heard before they could be seen. And with trained ears, Thomas might have heard the mine begin to collapse, a trickle of rock that turned into a roar of stone and crushed him. But he wouldn’t have heard himself being dug out, the sound of his body being dumped on the kitchen table of his home, and he wouldn’t be able to listen for anguished cries from his wife, Katherine.

And he would never again hear one of his daughters, Florence, who grew up and gave birth to Thomas, who is my father. 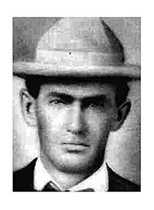 To be an Irish American is often to be haunted. This is not a statement of monopoly, simply one of fact: When you grow up as an Irish American, you often grow up homesick for a country you have never seen, because you feel that no matter how much your ancestors have sacrificed, the world you have was only formed because they lost their own.

Our ghosts live in the water and they live in the earth. They are digging in America’s coal mines, riding the railroads and walking the streets of political wards; they are sailing above and drowning below the churning, gray Atlantic; and they are standing on the docks in Ireland, wandering through Famine houses, and passing in and out of the many-colored doors of Dublin.

There is an inescapable feeling of the past always being present, of an existence stitched together from threads of time unspooling from two coasts and across roiling waves.

“Terraced thousands died, shaking scythes at cannon,” Seamus Heaney wrote of the 1798 Irish rebels. “The hillside blushed, soaked in our broken wave. They buried us without shroud or coffin and in August the barley grew up out of the grave.”

Four years ago, I watched rain falling in sheer continuous curtains on the black River Shannon, its waters slowly coursing through a sad, old city. I was standing on a covered balcony, holding one of the last pints of Guinness I would drink on that trip to Ireland, savoring the cream and bite of the dark liquid. Above me stretched floor after floor of the Clarion Hotel, a touch of modernity just downstream from a 13th-century castle.

Limerick had seemingly been whiplashed by good and bad impulses in the wake of the overheated economic revival known as the “Celtic Tiger.” Neighborhoods filled with off-track betting, daytime casinos and young men warily eyeing one another were uneasy outliers of vibrant shopping districts with pedestrian malls and gourmet menus. That June was split between ongoing drug and gang violence and the triumphant red, blue and yellow banners celebrating the championship of the province’s rugby team.

And in the hotel — a chunk of glass stridently standing among stone walls and factories — time intertwined on a sonic level. A party ended and a man sang a different type of song than the blaring collection of pop music that had already pulsed through balcony windows.

His voice was a tenor of excellent tone. I didn’t know the name of the song at the time, but my brother said it was “The Town I Loved So Well.” It talks of Derry, one of many places ravaged during the violence of the Troubles, the period from the 1960s to ’90s when Catholics and Protestants clashed in the fight for the future of Northern Ireland.

But when I returned how my eyes have burned
To see how a town could be brought to its knees
By the armored cars and the bombed out bars
And the gas that hangs on to every breeze.
Now the army’s installed by that old gas yard wall
And the damned barbed wire gets higher and higher
With their tanks and their guns, oh my God, what have they done
To the town I loved so well.

I’ve waited in line to see the Book of Kells, kissed the Blarney Stone, had more than a few pints in Temple Bar, taken pictures of the Cliffs of Moher, and stood in the courtyard of Kilmainham Gaol, staring at the lilies that mark where the leaders of the 1916 Easter Rising were executed. Yet my most striking Irish memory is from that melodious moment, as I stood in a monument to the present’s prosperity while listening to a song about the past’s despondency.

It calls to mind the scene from James Joyce’s “The Dead,” wherein a man watches his wife stopped in her tracks by a song from a tragic part of her life and marvels at the “grace and mystery in her attitude as if she were a symbol of something.”

“Distant Music he would call the picture if he were a painter. . . . The voice, made plaintive by distance and by the singer’s hoarseness, faintly illuminated the cadence of the air with words expressing grief.”

And yet, after the man was finished singing four years ago, there was no great shedding of tears among remaining revelers. It was just a late night at a hotel bar again, with attendant conviviality and good humor.

A few months later, I met Martin McGuinness and Peter Robinson at an event in Annapolis, Maryland. McGuinness, a nationalist political leader with an Irish Republican Army background, and Robinson, a founding member of one of the most strident unionist parties in Northern Ireland, had made a stop to watch, of all things, a presentation on government data tracking.

Would some generations have thought those two, from such disparate ends of ideology, could ever sit near one another for a presentation on a government management tool? I think some would have been surprised if any meeting could end in anything but bloodshed.

I was asked later if McGuinness had any scars. I said, “No,” but a better answer would have been, “No visible ones.” He was taller than I thought, very genial, with a well-cut blue suit and a soft handshake. If you didn’t know he had been in the IRA, you might have guessed he was a bank manager or well-meaning boss who needs a punctual secretary to get through the day.

How much has changed, and yet so much hasn’t. I can’t say for sure, but I don’t think McGuinness and Robinson said a personal word to each other in the room, besides remarking on the government toys paraded for their benefit.

And I don’t remember — although, I can’t say for sure — them ever making eye contact with each other.

I was in Ireland for Notre Dame’s football game, and it was an event the Irish people should have understood on an emotional level, even if the action on the field was hard for them to follow. Their own sports, such as hurling, were emblems of the fight for self-determination, not so different from the beginnings of Notre Dame’s own popularity amongst Irish Americans.

The backdrop was undeniably difficult. The Celtic Tiger seems more and more to have been a fleeting fairy tale, as crushing debt threatens to consume the country’s future. The cottages abandoned amid starvation in the 19th century are now joined by “ghost estates” of unfinished luxury housing developments. Even the national soccer team, after a 10-year absence from a major tournament, was scored upon with a flukey header less than three minutes into its Euro 2012 competition, and left the tournament at the bottom of its group without a victory.

And yet, along with inescapable fatalism, the Irish are filled with humor and a deep appreciation of life’s bittersweet essence. Perhaps that combination is inevitable when something as simple as a football game is a meeting of past and present, of people who live in different countries but share the same names, the same appearances and even the same family trees. Over the centuries, Irish people have left and been left behind; we are defined by absence. And the more we are together, the more we see our ghosts.

But we nod and smile at them because they are our own ghosts. And because of them, we are able to try and find the poetry in the water and in the earth.