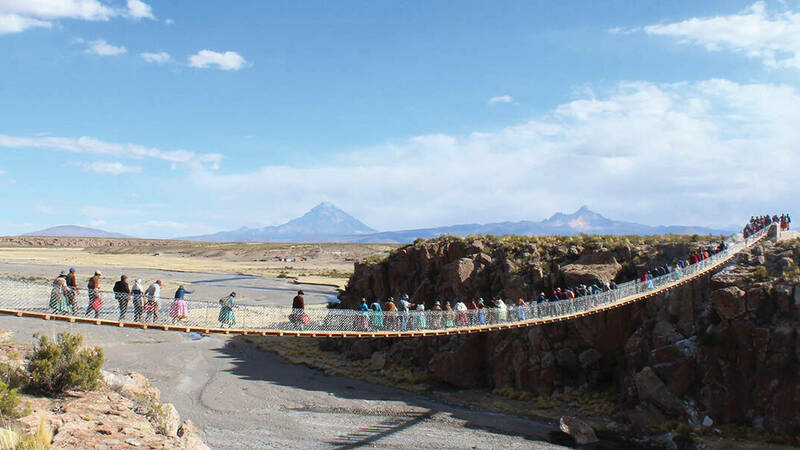 After several weeks of sweaty work and setbacks, the time had come. Amid the swirl of dancing and the scents of celebration foods, Brittany Margritz ’19 ventured out onto the new footbridge spanning the Río Mallkuchusi in western Bolivia. A doubtful grandmother clung to Margritz’s arm as all 63 residents of the village of Mallkuchusi walked along and jumped up and down on the 96-meter bridge that many of them had helped to build.

Margritz assured her companion the bridge was safe. “I promise,” she said. “I double-checked the math myself.”

Now a civil engineer by profession, Margritz works as a program manager for the nongovernmental organization Engineers in Action (EIA). Having gotten involved in EIA through the Mallkuchusi project during her senior year at Notre Dame, she lives and works in the small, landlocked, southern African kingdom of Eswatini, where she oversees footbridge construction projects for towns in need of a safe river crossing. Once a bridge is finished, the community it will serve celebrates with an inaugural walk — and collectively tests the bridge’s safety. “They’ll always remember that moment when there were hundreds of people on the bridge and never be scared again,” Margritz says, “because there will never be that many people on the bridge all at the same time on a normal day.”

More than marking the end of construction, an EIA bridge dedication is the culmination of months of preparation on site and on the campuses of North American universities.

In Eswatini, the bridges are built from June through September, before the rainy season. During the rest of the year, Margritz and her team visit towns and villages to evaluate potential locations for future projects. They give presentations about what the work entails, solicit input from community leaders and interview residents in Siswati, the local language. Then, collaborating with an entity of the national government called Micro Projects, Margritz’s staff — three engineers and one community development officer, all from Eswatini — muster the enthusiasm, materials and expertise needed to bring a project to completion.

Meanwhile, students from the United States or Canada will get to work, designing a bridge based on the specifications Margritz and her team provide. The EIA bridge program has collaborated with 32 university chapters since its founding in 2006. One regular contributor is NDSEED, Notre Dame Students Empowering through Engineering Development. As the NDSEED project manager during her senior year, Margritz prepared to lead a student team to Bolivia during the summer after her graduation. Once the project was finished, she returned to the U.S. for a few days, then flew to Eswatini to start work as an EIA fellow. She took on the program manager role a few months later.

Normally, the engineering students who design a bridge travel to build it alongside volunteers from the community, but Margritz’s first two construction seasons as program manager have been anything but normal. In 2020, the COVID-19 pandemic canceled travel plans and scaled down the five bridges EIA had planned to build to just one.

As the student chapters labored from afar, Margritz and her team were intentional about their planning and building activity so as not to endanger public health. “At the time there wasn’t even equitable access to proper PPE or COVID-testing kits,” she says. “We had to think very carefully about how to protect our local communities especially, because they’re at a higher risk.”

The four postponed bridge projects are slated for completion this year, but Margritz had to step back from the work when escalating pro-democracy demonstrations in Eswatini, Africa’s last absolute monarchy, forced her to evacuate to the U.S. for a month. Back on the ground in August, she was pushing to finish two projects and make headway on another.

Even when historical events aren’t interfering with construction, the challenges of the work are numerous, but that’s largely why Margritz feels called to it. In Bolivia, she says, nothing ever went according to plan. Living six hours from the nearest city, in a town with no running water, she and the seven other student engineers had to get creative to make things work.

Despite harsh temperatures and supply-chain delays, she found the autonomy to make decisions on the fly exciting. She bonded with her peers and the people of the village after working through difficult moments together. “Seeing how driven the community was to get this bridge completed, that convinced me that this was the right place for me to be. Working with people who will use the infrastructure every day really changes the energy.”

Close partnerships are the core of EIA’s work — to the benefit of everyone. In an unfamiliar environment, the students tackle unexpected issues alongside local volunteers and laborers who know the terrain and have more hands-on experience. In class, Margritz says, the problems are on paper to be solved for a grade. But on the ground, getting a calculation wrong could mean a bridge collapses and people die. Faced with such high stakes, the undergraduate teams learn to lean on local expertise.

“Close partnerships” also means empowering local capacity. One member of Margritz’s professional team started as a volunteer who kept showing up at construction sites armed with extensive knowledge about the projects. “We said, ‘Who is this guy? How does he know so much?’ Turns out he has an engineering degree, and now he’s a part of the permanent staff.”

Margritz says several staffers have come aboard this way. “It’s really exciting to see these well-trained engineers be able to do this work, and they’re extremely passionate about it.” With this in mind, EIA is trying to create an “ecosystem” of skill exchange between students training to become professional engineers and these Emaswati communities. Margritz calls it “the bridge-building family.”

Overall, it’s less about the bridge and more about community. “You’ve got a lot of people that are interested and passionate about doing this kind of work,” and who wouldn’t otherwise have that opportunity, she says.

The footbridges are sturdy yet simple. The core EIA design is highly adaptable to the unique technical specifications of each crossing site. Two piers are built on each side of the river. Five-inch-thick steel cables link each pier to one on the opposite bank. Wooden planks three feet wide form the walking path, while chain-link fencing runs the length to provide guardrails. The finished bridge is strong enough to permit sheep and even motorcycles to cross, but narrow enough to prevent cars.

Their durability makes them key connection points in communities where flooding can make safe travel an impossibility. EIA bridges solve a critical problem for villages where kids going to school or adults walking to work must wade or swim or risk their safety on an old, unreliable crossing to reach their destination. “You’ll often go to a community and find out that there’ve been some tragic accidents where people just had to cross the river, and they had no choice and there was not a good option,” Margritz says.

One pilot study conducted in Rwanda by another NGO, Bridges to Prosperity, determined that the construction of a sturdy crossing point boosted economic activity, agricultural yields, job opportunities and school enrollments. Bridges “actually have a really high return on investment” compared to other interventions, Margritz says. “You don’t typically get that much bang for your buck.”

Beyond construction, EIA aims to train technicians in each community to maintain and repair the bridges. Often, Margritz says, the bridges become a springboard for other locally led infrastructure projects. “If you partnered with the community, and you really worked hard to make sure that you were passing skills on to them, you’ll find that they’ve organized themselves now and they’re working on another project,” she says.

Mbhonconco, site of one of the 2021 bridge projects, is also building a school five minutes away from the new crossing. The excitement surrounding the double project is tangible, and Margritz says she could see the organization of labor and materials for the bridge translating into support for the completion of the school building.

And while the EIA crossings may be plain as bridges go, some consider them scenic — such as the couple Margritz once saw taking their engagement photos at a new footbridge: “I guess an added bonus is that people in Eswatini just really like how they look.”

Erin Fennessy, a senior biochemistry and French major with a minor in journalism, ethics and democracy, was this magazine’s summer 2021 intern.