The images of the millions of displaced people living in refugee camps can be overwhelming to those who wish to offer assistance. It hurts even more to know that, as the Refugee Council USA says, “Over half of all recorded refugees are children who have been deprived of their material possessions, statehood, and sometimes even loved ones.” 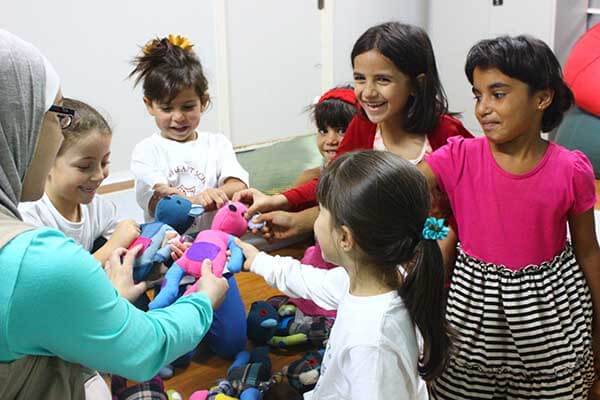 Steve Lehmann ’14MBA had an idea for how to ease the distress of dispossessed children. “I’m an engineer by training and business person,” the 30-year-old says, and his research into ways to help child refugees “narrowed it down to psychological trauma as being critical.”

He confesses to being “a little embarrassed” by the solution he arrived at, afraid it might be too cutesy for a serious need. For in 2015, Lehmann and his business partner, Dallas-area resident Andrew Jones, co-founded a teddy bear company, Threadies.

The handmade Thready bears are 12-inches tall with soft fabric bodies and a pouch for storing small treasures. For those sold in United States, the pocket holds a poem relating the Threadies story; for those donated to refugee children, it holds a set of coping cards.

The cuddly toys’ main role is “to provide the psychological healing and comfort that vulnerable kids need.” Nothing cutesy about that. And when the assistant director of the University of Chicago’s Innovation Fund describes the steps taken to develop, manufacture, market, ship and distribute the bears, the serious nature of the humanitarian venture is apparent.

The first step, says Lehmann, was talking to experts on child welfare, which resulted in the coping card inserts — some with Arabic text, others with pictograms — that offer research-based techniques for handling trauma, such as listing all the friends a child has made at a refugee camp.

The little bears do more than offer comfort to refugee children, however, they also provide job training and income to the at-risk women in the West Bank who hand-sew them as part of their work with the Child’s Cup Full agency.

Once the idea became a reality children could hold and hug, however, unexpected complications arose. When U.S. customers purchase one of the stuffed toys, a “twin” bear is donated to a child refugee. While there are now, says Lehmann, “thousands of U.S. kids with bears,” packages sent to refugee camps can get embroiled in problems at shipment points. The attempted coup in Turkey last year, for example, resulted in a large shipment getting lost, found, lost and found again. “It’s been frustrating,” says Lehmann, but Threadies now partners with various agencies that help with delivery issues and is on its way to a goal of delivering 15,000 of the huggable toys to refugees by 2018.

Travel considerations mean Lehmann has yet to personally deliver a Thready bear to a refugee child, but he is pleased by photos and reports of the soft toys now comforting children in six countries. “I can see the impact in kids’ eyes, even in a picture,” he says. “These products change the lives of kids.”