Does anyone remember the score of the October 1979 Notre Dame-Georgia Tech football game? I don’t. Not because it was inconsequential or because it was played without sufficient fanfare and excitement. Not because I was in the library, studying. Not even because, after 30-plus years, I simply can’t recall game scores from my undergraduate days. I don’t remember the ’79 Notre Dame-Georgia Tech game because I was drunk. I was also drunk for the games against Michigan State, Michigan, Navy . . . actually, I was drunk for every Notre Dame football game I ever attended as a Notre Dame student.

And why wouldn’t I have been? After all, it was my preconceived and misguided understanding that at Notre Dame an Eleventh Commandment dictated: “Thou shalt be knuckle-dragging, knee-walking, commode-hugging drunk before, during and after all Notre Dame football games — and any other athletic activity, for that matter.” That personal Eleventh Commandment (and unthinkable quantities of Miller Lite) was an unwavering constant in my college experience. When I collected my diploma in 1980, I congratulated myself on a well-lubricated education. Unknown to me as I chugged and cheered my way through senior week was that I had also progressed quite nicely on my journey into the disease of alcoholism.

Did Notre Dame make a drunk out of me? Not quite. In fact, not even a little bit. While Corby’s, Nickie’s and endless happy hours were wonderful venues for enhancing my drinking skills, they were also mere blips on the trajectory of imbibing I was destined to follow — an insidious and inevitable trajectory that would drag me into the depths of full-blown alcoholism. 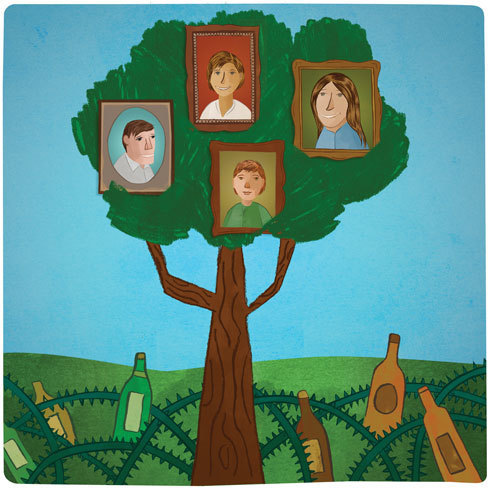 So, how did it start? Good question. Maybe it was my upbringing. Apparently I come from a genealogy that is littered with alcoholics and, it could be argued, continued into my immediate family. My dad was a self-described “functioning alcoholic,” and there was never a day in our house that wasn’t toasted with scotch . . . and more scotch . . . and did I mention that there was a lot of scotch? The drunken euphoria that ensued was, from my perspective as the kid serving the drinks, the birthright of smart, educated, successful people, and I was content to wait until I was “of age” for it to be my turn to raise a glass. Though it is tempting to pin my propensity to drink alcoholically on such a childhood, alas, my parents didn’t make me a drunk.

What about a military career — doesn’t the military cause a lot of people to become alcoholics? Following graduation from Notre Dame, I joined the U.S. Coast Guard and became a commissioned officer. As one of just a few females in the service, I was pretty excited to strut my stuff and show these guys what I was made of. Upon reporting to my first ship (a buoy tender in the Great Lakes), I was vaguely aware that hard work and keen ship-handling skills would impress the hell out of my shipmates. However, drinking them under the table seemed a lot easier and, what do you know, it worked. Instant celebrity status was accorded me wherever I was stationed — all it took was a crisp uniform, a cold keg, and, bam, mission accomplished. I was one of the guys. But even with all of the misspent liberty I accrued in every gin joint I could find, I know now that my Coast Guard days (and alcohol-saturated nights) did not engender my alcoholism.

Along the way, I was also becoming a savvy alcoholic. Although there was never a specific alcohol-related incident to derail my career, there were enough close calls for me to intuit, on some hazy level, that my seafaring days should probably be curtailed. Hmmm, so what to do next? Wait, what about marriage and children? That was the ticket!

So began my next chapter of . . . drinking. While I had no intention that my life would play out as such a horror story, by the time my third child was born I had no control over how anything in my life played out. I had never pretended to have any control over how much I drank (didn’t everyone drink to get drunk?), but by baby number three I had finally lost any control over when I drank. The 5 o’clock cocktail became the noon beer, which became the morning pick-me-up, which devolved into the 4 a.m. crawl into the basement to suck down as much box wine as possible to stop the shaking and sweats. Clearly I had hit bottom, both literally and figuratively. Or had I?

When my husband finally snapped to the fact that his fun-loving bride had been replaced by a raging drunk, the logical course of action was to ship me off to rehab — great plan, except for the part where the tearful, guilt-racked mother learns and accepts that she is, indeed, suffering from the disease of alcoholism. The only thing I took away from my rehab experience was my own version of “Step One”; specifically, I was powerless over all of the jerks who thought I had a problem with alcohol and who were making my life unmanageable. Not a great starting point. I returned home to hit a few 12-step meetings (and decided I wasn’t nearly as pathetic as “those people”) and then got back to the important business of being a perfect wife and mother of the year. It went splendidly for a while — a very short while. It wasn’t long until I was in the black hole of not being able to live with a drink and not being able to live without one. I spent whole days rocking back and forth in a chair, sure that I was losing my mind.

Finally, I drank. A lot. And secretively, I thought, as I hid bottles around the house and yard. The insanity of the disease propelled me to unexplored levels of lying, manipulation and the hideous madness that accompanies alcoholism’s inevitable progression. My only prayer each night was that I wouldn’t wake up the next morning.

So, what happened? Well, I can’t actually take credit for the events that brought me to my knees and inspired my moment of clarity. In a nutshell, I was kicked out of the house and not invited back. Under any circumstances. Ever. That got my attention, and at age 41, for the first time in my life, I became willing to go anywhere and do anything to not pick up a drink. I returned to the rehab I had so contemptuously sneered at and became a sponge, listening to and learning every particle of recovery-based information offered.

After 30 days, my counselors warned me that returning home to three young children was a recipe for disaster unless I first learned to embrace a sober lifestyle. With the assistance of one of my rehab counselors, I located a bed in one of the few women’s sober living houses in the country. It was in Albuquerque, New Mexico, far removed from my New York residence, and it was there that the miracle of recovery truly began for me.

The “home” we found was the most unlikely place imaginable for miracles — it was actually a program created for up to 50 convicted felons who were also addicts and/or alcoholics, and the house represented an opportunity for them to demonstrate to their “handlers” that they could function in the real world while maintaining their sobriety. Each “bedroom” had three sets of triple-high pallet beds, and there were two bathrooms for the entire population. When I arrived at the crumbling adobe building in Albuquerque’s “war zone,” the first question the house manager asked me was who my P.O. was. As I glanced around the “office” (which also served as the kitchen, laundry and TV room) for catalogues, I politely informed her that I hadn’t ordered anything and hence, knew of no “purchase order” number she might be referring to. Wrong answer — she was referring to my parole officer. Well, I didn’t have one, so she asked me if I had a “tracker”; again, since I hadn’t ordered anything, I explained to her that no tracking number was necessary. Wrong again — she wanted to know who my tracking officer was.

It was a rough start for this pampered white girl, especially when I realized that I was the only white girl among 49 Native American and Hispanic women. My cultural shortcomings didn’t stop there. When I heard women referring to one another as “homies,” I not-so-brilliantly concluded that “homies” was a Southwestern term for “cleaning ladies” and, in fact, concluded that if all of these women had been housecleaners, it might explain why they had wound up in jail — they had probably stolen property from their clients. I had a lot to learn.

And I did. Once I had accepted that I couldn’t possibly have found such a warped and twisted world by accident, I began to understand that I had been literally plunged into the reality of my disease. The putrid smells, the filth and the incessant pulsing of life in a ghetto could not — and would not — be ignored. I found a job in a pancake house that paid $2.10 an hour plus tips, serving huevos rancheros to the local drug dealers and hookers; saving every nickel and dime from tips, I was able to pay my rent of $500 a month. I had not realized that Albuquerque is on a plateau and, hence, has really cold winters — I arrived in August, but by October, my Chaco sandals and Ralph Lauren shorts weren’t getting the job done. I found a women’s charitable group that started making clothing donations to our home, and by the time the snow flew, my “homies” and I were ready to weather the elements. We also started receiving furniture and kitchen donations and were able to take small steps to make our “house” a home.

But the real miracle I discovered in that sober living house was love, hope and joy — at first, incredibly, in the women I was living with, and then, even more incredibly, in myself. Stripped of a lifetime of “props” (family, education, career), I was forced to start to learn not only who I really was but also who I wasn’t. It was the most terrifying, exhilarating and ultimately freeing experience in my life — and that was just the beginning. After I had spent six months in New Mexico, my husband and I decided it was time for me to return home and put my newfound recovery into action.

Thirteen years later, I am still married to the same amazing man and, with him, have raised three amazing children. I have gone through the death of my father, breast cancer and the death of my brother, Laurence Hoch ’83, without picking up a drink. Four years ago, I opened the Mary DeVeau Women’s Sober Living House here in Plattsburgh, New York, and have watched other women take the leap and allow their lives to be transformed through recovery.

I’m an alcoholic because I have the disease of alcoholism. I didn’t ask for this disease, but today I take responsibility for managing it. I talk about it (and write about it) because while pieces of my past are shameful, recovery is not. I have learned that this is an equal-opportunity disease, affecting people from Park Avenue to park benches, from the White House to the jail house. No one and no place can cause it, just as no one and no place can cure it. Recovery is an inside job and, once embraced, represents the journey of a lifetime. One day at a time.

Loretta Rietsema lives in Plattsburgh, New York, and is president of the foundation that owns the Mary DeVeau Women’s Sober Living House (marydeveauhouse.com). Email her at lrietsema@gmail.com.