What is a conservative to do this November? Trump? Or, “#NeverTrump”?

Those questions drew an estimated 300 people to a packed LaFortune Ballroom last Friday for a debate-style panel discussion on “2016 and the Future of Conservatism” sponsored by a coalition of academic units and student groups, including the College Republicans. Students were already sitting on the floor when I arrived 20 minutes early and found a place to stand at the back of the room. 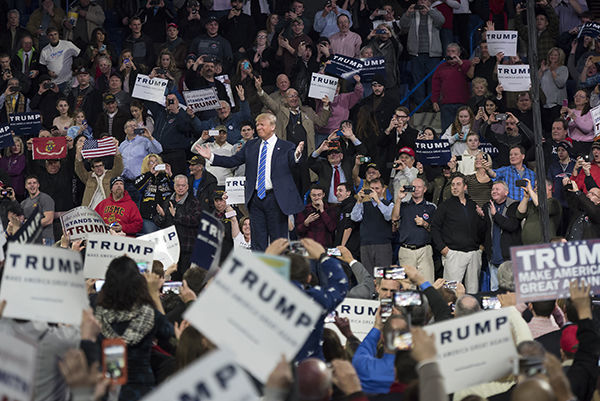 Facing off were Charles Kesler, a professor of government at Claremont McKenna College and perhaps the most prominent conservative intellectual to defend Donald Trump, and National Review columnist David French, a self-styled sergeant of the Never Trump movement.

The thing to remember, Kesler opened, is that Trump won millions of primary votes against 16 Republican opponents. No matter what the pundits might say, Trump was democratically nominated.

“The big story that I take from that process was the weakness of the other 16, not so much really Trump’s strength,” Kesler said, touching on what seemed to be his main argument to vote for the billionaire businessman this fall: It is not that Trump is a good candidate from a conservative perspective. It is that his Democratic opponent, Hillary Rodham Clinton, is worse.

For conservatives, the moment is particularly urgent in the nomination of Supreme Court justices, he argued. The next president will not only appoint a successor to the late Justice Antonin Scalia, but may put forward candidates for as many as four other future vacancies.

“Even with just one new liberal justice replacing Scalia, we would have the first liberal court — the first court with a majority appointed by the Democrats and with generally liberal inclinations — since 1969. And if you liked the Warren Court, you are going to love what the Clinton Court is going to do,” he said.

Kesler and French could agree that on the issue of abortion, conservatives should prefer a Trump presidency simply because Trump does not really seem to care, whereas Clinton does care and would try to make getting an abortion easier and, both argued, work to provide federal funding for it.

But that is not enough for French, who said both major party candidates are so unqualified that he will vote for neither. Both are liars, he claimed. As a conservative he doesn’t feel compelled to support the Democratic nominee, but what makes Trump so bad for French comes down to the candidate’s ego.

“He will be a president who makes all his decisions based on what is best for Trump in the moment,” French said. “It is the quest for power for one man.”

Danes don’t have to choose between just two candidates. The advantages of that system, which is common in Europe, seem more obvious to me than ever.

Even if you agree with French that Trump himself is the least qualified nominee ever to win the GOP nomination, you might still believe he will surround himself with advisers who would help him form a good administration. But French warned the audience not to expect that to happen, reminding us that Trump said “I alone can fix it” as he accepted his nomination.

What’s more, French claimed, Trump has a lifelong habit of promoting people to their level of incompetence in order to gain their loyalty, citing former campaign managers Corey Lewandowski and Paul Manafort as well as current Trump 2016 CEO Stephen Bannon as examples because, he argued, they could not have gotten similar jobs with anyone else.

Asked what he saw as conservatives’ best alternative, French pointed to the nominee of the Libertarian Party as well as a popular actor who is not a candidate but was recently named one of Time magazine’s most influential people in the world.

“Right now I’m choosing between the Johnsons — Gary Johnson or Dwayne ‘The Rock’ Johnson. And I’m leaning towards the Rock,” he joked.

Even though French said he is likely to actually vote Libertarian in 2016, he has reservations, as many conservatives do. Gary Johnson is often described as fiscally conservative with socially liberal views on abortion, marijuana and limitations on religious freedom.

Personally, I am not going to vote this November. Not because I cannot find a candidate that I believe deserves my vote, but because I only just moved to the United States from Denmark and do not have the right.

In Denmark we have a completely different system: We have no president, only a prime minister. We have one chamber, the Parliament, and the elections are proportional rather than first-past-the-post, meaning that if 15 percent of the electorate votes for a party, that party will hold roughly 15 percent of the seats in the new government. In other words, Danes don’t have to choose between just two candidates. As of June 2015, our latest election, a completely new party named The Alternative became the ninth to currently hold seats in Parliament.

The advantages of that system, which is common in Europe, seem more obvious to me than ever, not only because of the choices available in this presidential election, but also because of the American government’s increasing inability to function and reach compromise.

With nine parties in parliament, extreme parties will only ever win a limited number of seats. Most parties are fairly moderate and able to work across the aisles, leaving out parties unwilling to compromise and reducing their influence.

On the other hand, I will admit, few Danish politicians seem very principled.

I have now lived in America for two months. I am not able to say what form of government is better. But perhaps it is time to consider reforms that incentivize coalition and compromise. The core issue, particularly for conservatives, is how voters on the edges can dominate the primaries, leaving unfavorable choices to the moderate majority.

So what is a conservative to do? At the end, Kesler and French could agree on one course of action: Push for a change of the nomination process.