Big Mac
If you were halfway sentient in the mid-1970s you know how to describe the Big Mac: Two all-beef patties, special sauce, lettuce, cheese, pickles, onions on a sesame seed bun. This phrase, set to an irritatingly irresistible jingle, defined not only a sandwich but also an era. While the PBJ sandwich (peanut butter and jelly) — and maybe, for the daring, especially in the Northeast, PBJF (PBJ plus Marshmallow Fluff) or even the Fluffernutter — once was the national sandwich, the Big Mac is an honest contender for the title. This sandwich has its own museum (North Huntingdon, Pennsylvania). And it is so ubiquitous that The Economist magazine has created a Big Mac Index, which it employs to determine whether world currencies are at their natural level.

New York Strip Steak
You don’t have to be in New York, and even if you are in New York you don’t have to be at Delmonico’s — where, according to the folklore, this all-American food item was popularized — to enjoy a New York strip steak. Connoisseurs will debate which is the most flavorful cut of steak, but there is no sturdier symbol of America at table, at least through the early 1960s, than the New York strip. A good New York strip — to many American diners the phrase is redundant — will set you back $45 or more, even outside of New York. (The price at Delmonico’s is $49.) Cut from the longissimus dorsi muscle, the steak is sometimes called the Kansas City strip or top sirloin. By any name, it’s America in a bite. 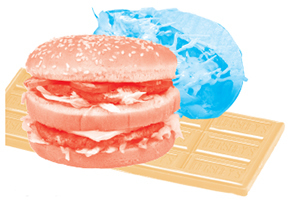 Philadelphia Cheesesteak Sandwich
Here’s another American food classic that defies its geographical label. You can get a Philly cheesesteak at pretty much any sandwich shop, but in this case returning to the roots is the way to go. Let’s not wade into the controversy of where or how the sandwich originated, or the Cheez-Whiz-versus-provolone dispute, or even whether it should be one word or two (though many purists will argue for one). And let’s agree, too, that while there may be many claimants for the finest Philly cheesesteak, Pat’s King of Steaks and Geno’s Steaks are on the list of contenders, with a slight advantage to Pat’s if only because its address (Passyunk Avenue) is so much fun to say. VisitPhilly.com describes the sandwich as a “civic icon, a tourist draw and a cultural obsession” — a description upon which everyone can agree.

Southern Fried Chicken
Chicken is fried all over the world — India, Korea, Austria — but it is in the American South where fried chicken is the signature regional staple. Likely produced when a Scottish recipe was amplified and immensely improved by the addition of spices familiar to the African slaves who were sent in bondage to the region, there are a zillion contenders for best Southern fried chicken. But Gus’s (locales in Tennessee) and Mary Mac’s Tea Room (in Atlanta — order the fried green tomatoes as a side) are two of the best. And don’t ignore the BBB restaurant in Oxford, Mississippi, where the Last Gentleman entrée features a two-piece plate of Coca-Cola brined fried chicken, available for breakfast.

The American Thanksgiving Meal
On the surface this needs no further explanation: roast turkey, stuffing, cranberry sauce, apple pie. But not so fast. Maybe it’s a deep-fried turkey. Maybe it is oyster stuffing. Maybe the cranberry sauce doesn’t come slipping out of an Ocean Spray can and instead is made with fresh cranberries. Maybe there is pecan pie. Maybe there’s an ice cream dessert. Maybe there’s a Mexican appetizer — a cheese-and-salsa dip, perhaps. Maybe the beverage of choice is fresh apple cider. Maybe you have your own ideas. Whatever they are, there’s no disagreement that this is the best meal of the year, a harvest celebration and a moment when gluttony is forgiven and fostered, consumed around the time the Detroit Lions play the Packers or the Bears.

The Ballpark Hot Dog
This is so much a part of American culture that there actually is a brand called Ball Park, created in 1957 at the request of the Detroit Tigers. Hot dogs first appeared at ballparks in 1893, when they were introduced as a mid-game snack by the old St. Louis Browns, according to the National Hot Dog and Sausage Council. And there is the story, probably apocryphal, that Harry Stevens hawked “red hot dachshund sausages” at the Polo Grounds in New York and then shortened his appeal to “hot dog.” None of this matters. What matters is that the most frequently uttered phrase at a food stand in all 30 major league parks is this:_ It wouldn’t be a ballgame without a hot dog._

Hershey Bar
Let’s agree: The rectangular milk chocolate bar manufactured by Hershey is not the finest chocolate bar available in the United States, or even in Pennsylvania, home of the Hershey Company, which nonetheless markets its product as “The Great American Chocolate Bar.” But there is something about the Hershey bar, with its trademark silver writing on its brown wrapper, that elevates it from snack to icon. Whether consumed with a glass of milk — the combination of choice for your grandfather — or between pieces of graham cracker around a campfire as a s’more, the Hershey bar has been part of the American diet since 1900, a 210-calorie portion of Americana.

Fish tacos
Whether with cumin, coriander and paprika, or with a lime crema sauce, or with an ancho chile powder and dried oregano, the fish taco combines two vital American epicurean impulses — food from the sea and from Latin American traditions. Popular in the West and South for decades, the fish taco recently has become a sturdy staple in the East, where it holds a prominent place both in Mexican joints and seafood palaces. The centerpiece is a firm white fish, sometimes tilapia, sometimes halibut, sometimes sole, even catfish, preferably fried in either pork fat or beer batter, but sometimes grilled. Agave nectar is optional, superfine cut slaw is a must — and so is an ample supply of napkins.

Shave ice
Sometimes (wrongly) described as Hawaiian ice, this tasty treat is offered on nearly every street corner in Honolulu and in rural outposts on Hawaii’s islands. In its natural setting it bears no resemblance whatsoever to commercially manufactured ice favors, to the products of home snow-cone machines, or to franchise or even so-called artisan shops on the mainland. First there’s the size differential; in Hawaii they’re huge. Then there are the fruit flavors; in Hawaii they’re the native guava or coconut. Shave ice almost certainly arrived in Hawaii through Japanese migrants, and it was in their modest early grocery stores that it began being offered. Warning: These are not snow cones. And they are not called “shaved ice.” Confuse these at your own risk, especially in Hawaii.

Grits
Here is an example of how a simple item — broken grains of corn, the hull and germ removed — can become a food favorite. These corn grains are the essence of grits, a lifestyle choice as well as a food group in the South, where this legacy of Native American cooking has taken on cultural importance far more robust than the food itself. This is serious business (the corn must be dried to a moisture content of 14 percent), but then again breakfast is the most important meal of the day, and, to the devotee, grits are the most important part of breakfast. And yes, it is a health food, of sorts, if you control the butter and milk, and it is a good source of folate and Vitamin B-6.