Lexington Green
Today Lexington Green is a quiet place, but in 1775 it was the site of the first skirmish of the Revolutionary War. “It was one by the village clock,” Henry Wadsworth Longfellow wrote of Paul Revere, “When he galloped into Lexington,” and what happened there changed the world. About five dozen militiamen squared off against British soldiers. Ralph Waldo Emerson described the fighting, later, at Concord as the “shot heard round the world,” but in fact the shots at Lexington mark the beginning of the American military effort to win independence. “Lay down your arms, you damned rebels,” a British officer commanded, and the militiamen’s refusal to do so helped found a nation.

Anchor Bar
Long ago, before it became a staple of bar food and inevitably modified by the word “Buffalo,” the lonely chicken wing — not easy to chew, not easy to eat, not easy to serve to company — was a much-ignored, much-ridiculed thing, the leftover least likely to be fought over. Then, and this is the favored legend, Teressa Bellissimo was faced with a hungry crew of college students in 1964. She cooked up a work of genius — a platter of chicken wings. Soon the tavern she and her husband ran, the Anchor Bar, became known as the high temple of the wing. You can visit it today on Main Street in Buffalo, New York — the place is lined with license plates from around the world, testimony to the appeal of the wing worldwide — but expect a wait.

The Palestra
America has scores of iconic sports palaces, and basketball especially so — the Pauley Pavilion in California, Hinkle Fieldhouse in Indiana, Madison Square Garden in New York, all come to mind — but the greatest of them all may be the Palestra in Philadelphia. With historic artifacts on the wall and memories creaking from every corner, the Palestra, on the campus of the University of Pennsylvania, is sometimes called the Cathedral of Basketball. It is the Churchill Downs, the Wrigley Field, the Augusta National Golf Club of basketball. Its Big Five (Penn, St. Joseph’s, Temple, LaSalle, Villanova) games are the stuff of legend, even if these days they don’t rate more than a paragraph in the morning paper.

18th and Vine
Today the 18th and Vine district of Kansas City, Missouri, includes such attractions as the Negro Leagues Baseball Museum, the Black Economic Union of Greater Kansas City and the Black Archives of Mid-America. Plus the American Jazz Museum. But 18th and Vine once was a live jazz museum, full of saucy and spicy sounds produced by Charlie Parker, Count Basie, Mary Lou Williams (the first woman to become a jazz star) and Big Joe Turner (who contributed the indispensable phrase “Shake, rattle and roll” to the American lexicon). Kansas City was known as a crossroads of the pioneer West — the head of the Oregon Trail and the Santa Fe Trail are in its environs — but it also was an important musical crossroads, particularly for African Americans who made 18th and Vine as much a sound as an address.

Homestead
At one time, Homestead, on the Monongahela River, was the site of one of the greatest industrial complexes on earth, miles of mills that made Southwestern Pennsylvania the steel capital of the world. Then Homestead, symbolic home of Andrew Carnegie’s steel empire, was the site of a violent labor confrontation, Pinkertons against steel workers, which left at least 10 dead. Though Homestead today is the site of a sprawling shopping center anchored by Macy’s and Target stores, it still struggles for economic revival after the crisis of the domestic steel industry. Yet it remains one of the landmarks of American labor history. Management finally won the titanic 1892 struggle but lost a larger battle, for it was at Homestead that Carnegie’s reputation was stained and where Henry Frick became the bete noire of the labor movement.

The HP Garage
It was in the unremarkable garage at 367 Addison Avenue — brown plywood frame, the sort of green doors that once might have kept in the horses — that Bill Hewlett and Dave Packard did in 1939 what so many of their Palo Alto, California, neighborhood try to do today: change the world. That garage, now widely regarded as the birthplace of Silicon Valley, was rehabilitated and turned into a shrine in 2004 and now is even listed in the National Register of Historical Places. U.S. Registered Landmark No. 976 is more than a place, however. It is a symbol — of American ingenuity, to be sure; of American entrepreneurship, of course; but also of the notion that great ideas and great industries sometimes spring from tucked-away places where men and women dream and create.

Cape Canaveral
This Florida city comprises little more than two square miles but its impact, range and significance knows no bounds. It was here, on the banks of the Banana River, that Alan B. Shepard Jr. left gravity’s bounds and became, in 1961, the first American in space; where John H. Glenn Jr., in 1961, became the first American to orbit the earth; and where Neil Armstrong and two companions were shot toward the moon in 1969 for the first lunar landing. Known for a brief time as Cape Kennedy, this tiny community has been America’s spaceport since 1950, planted here because its southern venue takes advantage of the earth’s rotation in eastward launches. The magic of the space program may have diminished but the importance of Cape Canaveral in the nation’s imagination has not faded.

Edmund Pettus Bridge
Along with Route 66 and the Erie Canal, these three words are among the most evocative in American history and culture. This structure, which spans the Alabama River at Selma, Alabama, is known not for its architectural distinction but rather for its role as the site of one of the most dramatic, and bloody, confrontations of the civil-rights era. It was on this bridge in March 1965 that heavily armed law-enforcement personnel confronted a civil-rights march, a clash that produced “Bloody Sunday” and led to two additional marches. Emerson may have celebrated the “rude bridge that arched the flood” at Concord in 1775, but the bridge that arched the Alabama 190 years later had an equal significance, for it led to the 1965 Voting Rights Act. 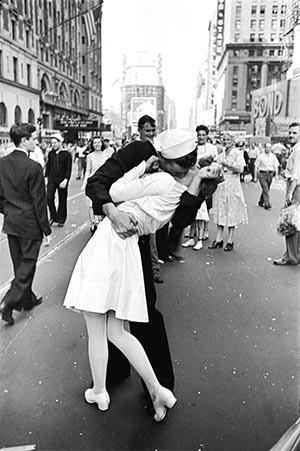 Times Square
The New York Times is no longer on Times Square — the place acquired its name after the newspaper moved there 110 years ago — but this area broadly at the crossroads of Seventh Avenue and Broadway is as much a part of the American imagination as it is of the American urban landscape. It is, most of all, a symbol — of American culture, of danger and degeneration, of rebirth and renewal. It was where Alfred Eisenstaedt took the nation’s most famous V-J Day celebratory picture and where the nation welcomes in the new year. Today its big signs and flashing neon scream the triumph of glamour over squalor — and signal the revitalization of a great American intersection.

Fallingwater
An hour southeast of Pittsburgh, in a forest glen alongside a rushing stream, sits the most distinctive personal residence in the country, the Frank Lloyd Wright masterpiece designed in 1935 and completed four years later. Built for department-store magnate Edgar Kaufmann Sr., the home stretches over a waterfall that drops 30 feet. It was constructed as a weekend retreat but now is open to visitors, who invariably find the house enthralling and the sound of the falling water intoxicating. The key to the beauty of this house, which once appeared on the cover of TIME magazine, is both the sense of serenity is creates and its seamless integration into the natural surrounding it occupies.