Lincoln’s Second Inaugural, 1865
Lincoln holds claim to many important, stirring speeches, including the Gettysburg Address, whose eight-score-and-ten words still are memorized by schoolchildren from coast to coast. But this speech, given at one of the most dangerous passages in our history, may be his greatest, speaking as it does of what guided the 16th president through the storm of secession and civil war: “malice toward none . . . charity for all . . . firmness in the right as God gives us to see the right.” With Biblical cadences and references, Lincoln captures the gravity of the moment, the hope that “this mighty scourge of war” might soon end — and the determination to press on, with the sobering but reassuring knowledge that “the judgments of the Lord are true and righteous altogether.” 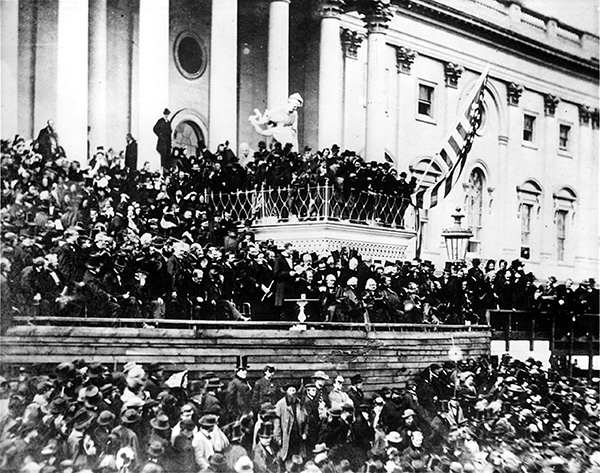 Sojurner Truth’s “Ain’t I a Woman?”
Many versions of this 1851 speech, delivered in Akron, Ohio, by a woman born into slavery but prominent as an abolitionist speaker, have been rendered. But the essence of her remarks — speaking of women’s strength, women’s rights — and the hypocrisy inherent in a nation founded on rights denying them to so many — shine through each version. “I think that ’twixt the negroes of the South and the women at the North, all talking about rights, the white men will be in a fix pretty soon,” she said, helping to frame that fix for all time, and to prompt the nation to address it, in time.

Joseph Welch’s Senate Hearing “Decency” Remarks
The 1954 Army-McCarthy hearings at mid-century presented a stern test of American values at a time when those very values were in jeopardy in a high-stakes competition with world communism. The venue for this speech was a Senate hearing room, and the target was the man who had targeted so many for alleged ties to communism and disloyalty to the United States. Exasperated by the conduct of Senator Joseph McCarthy of Wisconsin, the engine of this inquiry, Boston attorney Joseph N. Welch exploded with indignation and this unforgettable question: “Have you no sense of decency sir, at long last? Have you left no sense of decency?”

John F. Kennedy’s Inaugural Address
Only two American speeches go by a two-word quote shorthand — the other is Franklin Roosevelt’s “Four Freedoms” — but Kennedy’s 1961 “Ask Not” speech, delivered by the youngest man elected to the White House, is remarkable for more than its entreaty to Americans to ask what they could do for their country. A classic Cold War period piece, it is, at turns, bellicose and eloquent, speaking of national determination and national destiny but most of all giving Americans an admonition beyond the “Ask not” formulation — that “here on earth, God’s work must truly be our own.”

Franklin Roosevelt’s State of the Union Address
State of the Union addresses are one of the great set-pieces of American politics and have produced scores of speeches swiftly, and aptly, forgotten. But FDR’s last peacetime annual report to Congress, in 1941, set forth four freedoms that America had enshrined and that were in jeopardy as the world slipped into global conflict against tyranny. These four freedoms, which inspired a set of Norman Rockwell paintings, were freedom of speech and worship and freedom from want and fear, the latter a poignant choice for a chief executive who eight years earlier had said that a Depression-wracked nation had nothing to fear but “fear itself.” When FDR enumerated these four freedoms he added, pointedly, to each the phrase “everywhere” or “anywhere” in the world, a signal that these values were both universal and under worldwide challenge.

Martin Luther King’s Dream Speech
The great American civil rights leader was the marquee speaker at the landmark 1963 March on Washington that was one of the high points of the civil rights movement. His appearance before hundreds of thousands of Americans, black and white, is remembered for a riff that was prompted midspeech by the gospel singer Mahalia Jackson. She admonished King to “tell them about the dream,” an image he had used repeatedly in pulpits and at podiums across the country. His conclusion — which included his dream “that my four little children will one day live in a nation where they will not be judged by the color of their skin but by the content of their character” — represented in some ways the real beginning of broad American consensus that segregation and discrimination could no longer be tolerated.

Richard Nixon’s Undelivered Moon Speech
From his “Checkers” speech that salvaged his position on the 1952 Republican national ticket to his White House farewell after his 1974 resignation, Nixon gave perhaps more prominent speeches than any American of his time. But the most eloquent might be the one he never delivered, prepared in 1969 in the event the Apollo 11 astronauts who were headed for the first lunar landing perished in their endeavor. The speech, written by William Safire, began poignantly, “Fate has ordained that the men who went to the moon to explore in peace will stay on the moon to rest in peace.” It ended with an allusion to Rupert Brooke: “For every human being who looks up at the moon in the nights to come will know that there is some corner of another world that is forever mankind.”

Calvin Coolidge’s Police-strike Remarks
The 30th president is remembered more for not speaking than for speaking, and in truth the remarks that earn him a place here were actually a telegram — and the part that breathes in history consists of only 15 words. They came in the middle of the Boston Police strike of 1919 and they were, like the man himself, simple but firm: “There is no right to strike against the public safety by anyone, anywhere, any time.” These words, addressed to labor leader Samuel Gompers, catapulted the governor of Massachusetts to national prominence and to a place on the Republican national ticket a year later. By 1923, Coolidge was president and four years later became famous for six words he issued in relation to the 1928 election: “I do not choose to run.”

Douglas MacArthur’s Valedictory
Unlike Coolidge, MacArthur loved to talk and was remembered for many remarks, including his 1942 Philippines vow, “I shall return.” But in an illustrious career that included involvement in two world wars and the conflict in Korea, MacArthur is perhaps best known for his remarks on Capitol Hill after having been relieved of his duties by President Harry Truman in 1951. “The world has turned over many times since I took the oath on the plain at West Point, and the hopes and dreams have long since vanished,” MacArthur told the lawmakers, “but I still remember the refrain of one of the most popular barrack ballads of that day, which proclaimed most proudly that ‘old soldiers never die; they just fade away.’”

Barbara Jordan’s Speech before the Democratic Convention
Most House members are not remembered for even one speech, but Barbara Jordan, a black Democrat from Texas, is remembered for two — her 1974 remarks setting forth the basis for the impeachment of President Richard Nixon, and her 1976 keynote speech at the Democratic National Convention. In that latter speech, she commented on the phenomenon of a black woman addressing a political party’s nominating convention, and in truth the text of her speech does not match the impact of her speech, in which she asked: “Are we to be one people bound together by common spirit, sharing in a common endeavor, or will we become a divided nation?” By appearing in that setting, and by asking that question, she helped answer it.