The American Small College
Most Western nations possess powerhouse institutions of higher learning: Oxford and Cambridge, the Sorbonne, the University of Toronto. The United States has those as well, but it also possesses hundreds of small colleges with sturdy traditions, a heavy weight on the liberal arts, colorful college quads and greens, and an emphasis on personal teaching. One state, Maine, has a troika of such colleges: Bates, Bowdoin and Colby. One gender, female, has a constellation of fine colleges that educate only women: Wellesley, Russell Sage, Mary Baldwin and Mount Holyoke. One race, black, has a batch of such institutions: Spellman, Morehouse, Howard. And then there are those that are open to all comers, as long as they meet the (usually selective) admissions criteria: Amherst, Lewis and Clark, Davidson, and Gettysburg. Everyone who attends these schools learns lifelong lessons — and they all learn the college song.

Infield Fly Rule
Here is only one-quarter of the official text of this vital element of baseball: “An INFIELD FLY is a fair fly ball (not including a line drive nor an attempted bunt) which can be caught by an infielder with ordinary effort, when first and second, or first, second and third bases are occupied, before two are out. The pitcher, catcher and any outfielder who stations himself in the infield on the play shall be considered infielders for the purpose of this rule.” So what, you ask? The infield-fly rule appears on this list not because the country’s destiny is affected when a batter hits a fair fly ball, but because this rule is a symbol of the intricacy of our national game, beloved by its fans for its combination of simplicity and complexity. Check the rulebook on what happens when a fly ball falls untouched to the ground outside the baseline and then bounces fair before passing first or third base. 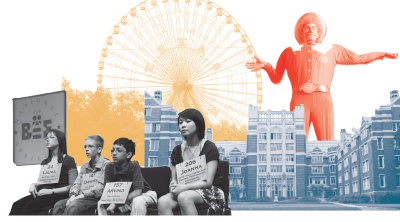 Texas State Fair
State fairs are part of both the American landscape and American folklore, and they occur coast to coast, with Arkansas and Oklahoma even sharing a state fair. So much a part of our national imagination are these events that Rodgers and Hammerstein wrote a musical of that name, which is why you know the tune “It Might as Well Be Spring.” But no state fair is quite like the one in Texas (official name: State Fair of Texas), which annually boasts gustatory standards like the corn dog along with such imaginative newcomers as the Fried Thanksgiving Dinner, which debuted to great acclaim in 2013. But the big attraction is Big Tex. The 52-foot statue, which was unveiled in 1952, burned down in 2012 and grew taller during its reconstruction. Big Tex now looms at 55 feet tall over the fair.

Rube’s Restaurant
At an otherwise unremarkable rural crossroads in Montour, Iowa, stands one of the great monuments to American epicurean tradition, a steakhouse called Rube’s that, aside from the post office, is the only commercial building in town. Step into this landmark, beloved by Grinnell College students and post-game University of Iowa alumni groups, and approach the meat counter. Then pick out a giant T-bone or a monster pork chop, walk into the next room, plunk it on the grill — and cook your meal yourself. Add some Texas toast (slather on the melted butter with a paint brush), throw on a baked potato and prepare one of America’s most distinctive meals. If you don’t like your dinner, you can blame the chef.

Heinz Ketchup
Okay, so it is not the condiment of kings. But no combination of produce and spices is quite so ubiquitous — quite so fundamental, quite so elemental — to the American palate as ketchup, and no ketchup is quite so much a part of the American identity as that produced by Heinz, the largest consumer of tomatoes in the world, since 1876. Whether in its iconic glass bottle or a red squeeze container or a single-serve packet (11 billion distributed a year, enough for two for every soul on earth), no burger, no dish of fries and, in some locales, no plate of eggs, is complete without the shake, rumble and roll-out of sticky, gooey and indispensably delicious ketchup, which exits that famous bottle at 0.028 miles per hour.

The High School Musical
The high school musical is so much a part of American life that Disney produced a film called High School Musical. And it had two sequels. Which is only right, given that, year after year, American high schools produce musicals by the tons. Of course High School Musical is one of the most frequently staged shows, along with war horses such as West Side Story, Grease, 42nd Street, Footloose and No No Nanette. Don’t forget Beauty and the Beast and Seussical. And don’t for a minute think that high school musicals are small-time or small-town forms of entertainment. In western Pennsylvania, high schools for more than two decades have gone all-out to win the Gene Kelly Awards or the Henry Mancini Awards. Since 2009 the National High School Musical Theater Awards — the Jimmys, in case you’re wondering — have awarded more than $1 million in scholarships.

Presidential debates
The U.S. presidential debate is now so much a fixture in our political cycle that it is difficult to remember that the first one was only a half-century ago. (The Lincoln-Douglas debates were for a Senate race in 1858, not for the 1860 presidential campaign that included both men plus two others.) In fact, the practice of presidential debates fell into disuse after the three John Kennedy-Richard Nixon confrontations of 1960 and was not revived until 1976. The 30 presidential debates have provided many memorable moments and several unforgettable thrusts and parries — and some have helped decide elections. The first 1960 debate was widely considered a major factor in Kennedy’s triumph, just as a 1980 debate is regarded as a vital element in Ronald Reagan’s victory over Jimmy Carter.

The Football Tailgate
Every college, including the one whose alumni read this magazine, believes it has the corner on the American custom of tailgating, and in truth there are colorful tailgates from Hanover, New Hampshire (green and white banners in the breeze, whiskey sours on hand), to Palo Alto, California (group tailgate permits arranged in advance). But the greatest tailgate of all might be at Oxford, Mississippi, where the fabled Grove of Ole Miss is full of tailgaters who, by strict regulations, can claim their spot only after 9 a.m. the Friday before the game. (Under no condition should you even think of employing a portable generator with a decibel rating over 60. No kegs, funnels or shots, either. Rules are rules.) But there are no restrictions on how lavish these feasts can be. Keep your eyes open for catfish and ribs — plus ample pourings of bourbon.

Fireman’s Muster
The ladder climb and the hose roll — and the competition to see which ancient fire engine can pump its stream of water the farthest — do not ordinarily hold honored positions in the annals of American sport, but in some communities these are the staples of a beloved event called the fireman’s muster. Dating to the mid-19th century, musters have had a remarkable resiliency across the country, with California holding its first as late as 1975. One of the most storied fire hand-tubs employed in these musters is Gerry No. 5 in Marblehead, Massachusetts, named for a native signer of the Declaration of Independence, Elbridge Gerry (whose name is also the inspiration for the gerrymander). It is the nexus of the town’s community spirit but also stands as a symbol of American volunteerism.

National Spelling Bee
In an era of Spellcheck it may seem odd that one of the sturdiest American traditions is the spelling bee, also the subject of a musical, The 25th Annual Putnam County Spelling Bee. The real bee, sponsored by nine newspapers, began in 1925, and since 1941 the competition has been run by the E.W. Scripps Co. Nobody knows the real origin behind the easily spelled word that describes the contest, but the best theory is that it derives from community social gatherings such as quilting bees. The first winning word was “gladiolus,” and over the years champions have won the bee by spelling correctly such challenging words as “odontalgia” and “chiaroscurist.”