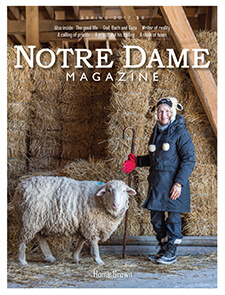 Spring is here, and the magazine’s forthcoming spring issue is a gardener’s basket of stories about alumni and students who are turning to life on the land, reinventing agriculture one project at a time — and rediscovering themselves in the bargain. Magazine intern Rasmus Jorgensen’s essay is a little taste of what’s to come. Enjoy. — The editors.

The small farm I lived on as a child really had everything: Enough land to grow crops and keep a few animals, fairly big stables, a meadow with a terrific little creek for swimming, rowing or fishing and, behind that, a large forest where we could get timber, take a walk or go hunting. Often we could see deer from the kitchen window. Behind the house was a huge, wonderful garden with flowers, rocks and apple trees.

The beauty was enough in itself to make me want to live in such a place again. But what really entices me these days is a desire to work with the land and animals to get my vegetables, meat and dairy. 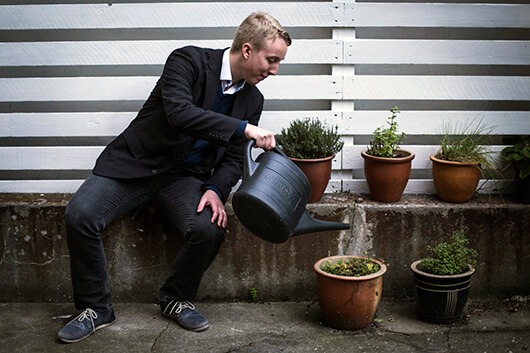 The trouble is, I don’t live on a farm. Last year I lived in a second-floor apartment in Aarhus, Denmark, that, at the beginning of the year, had only three plants: A habanero, a small orange tree that did not produce anything worth eating, and my roommate’s palm tree, Ludwig. But that would change.

For people who knew me as a teenager, my yearning to get my hands dirty, to work outside, might seem strange. Back then I would be inside either reading or playing music and video games. But now, somehow, homesteading is all I can think of.

I’m not alone, feeling this way. In my case the inspiration has come from a man who, about 10 years ago, bought a farm even smaller than the one I once lived on, and has striven since then toward self-sufficiency in the most interesting ways. He does all the simple things, such as growing tomatoes, but he also does things most of us don’t do, such as building his own greenhouses. He grows grains for the bread, animal feed and beer he makes, and he has laid out his vegetable garden so he has enough veggies, in abundant variety, to eat throughout the year. At one point or another, he’s had ducks, cows, chickens, sheep, bees, pigs, geese and horses, and I’m sure I’m forgetting some of the animals he has raised. All of this work, even the things he knew nothing about when he got started, he now does with expertise. He even makes and fixes his own tools, harvests his own timber and has used the wood to build a house — as if there wasn’t enough else to do.

I know all this because this man, Frank Erichsen, also hosts one of the most successful TV shows in Denmark. It started on a niche channel in 2008, but these days each episode may attract more than 800,000 viewers out of 5.7 million Danes. Good luck beating those ratings, Sunday Night Football.

What’s really wonderful about Erichsen’s show, Bonderøven — which means something like “the bumpkin” — is that it’s not reality TV. There are no confession rooms, no drama, no clown music. There isn’t even a director on the “set.” Just one guy (and his cameraman) doing what he loves to do and cultivating a nation’s interest in growing things and being more sustainable.

Since Bonderøven was the fifth-most-watched television show in Denmark in 2015, there’s no denying that people are interested in Erichsen’s way of life, even those viewers who have never so much as touched a shovel. The same seems to be true in America, too. New opportunities keep popping up for those who want to get soil under their nails. In Denmark, local 4-H clubs have created urban gardens in many towns, giving kids who otherwise wouldn’t have had the opportunity to learn how to grow food a chance to learn from skilled volunteers. Some programs pair the kids with seniors groups, giving retired farmers and gardeners a way to share their knowledge with younger generations. I know of one case where immigrant children learned Danish from the old women who mentored them while reaping the literal fruits of their work together.

The effort I’ve made over the last year to make my own homesteading dreams come true, even if I don’t yet have a farm, has given me many happy moments — just looking at plants that are thriving is a great pleasure — some frustrations and, as a natural consequence, many lessons, which I now happily share with you.

In my apartment-based attempts to give Ludwig and the gang some new companions, I got myself a mini-greenhouse and some tomato, cucumber, radish and (home-grown) habanero seeds that I naïvely hoped would yield a harvest before I moved to the United States last July. I placed the greenhouse on a radiator, which, given my rush, seemed like a good idea — as long as I didn’t turn it up too high. I found out that you should take the greenhouse off the radiator when the seeds germinate — advice that I did not follow, but now it’s a lesson learned. 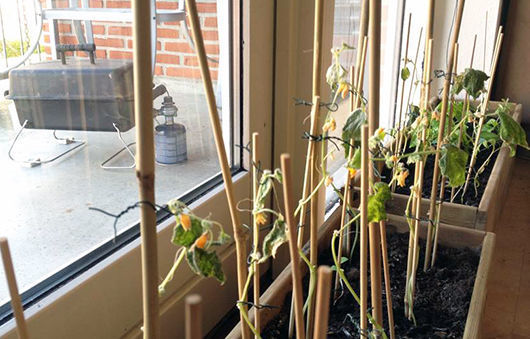 Still, the seedlings sprouted. Soon they became too large for my greenhouse and I needed a new place for them, which I didn’t have. Considering my moving plans, I was not willing to spend much money on solving the problem. Fortunately for me, my brother-in-law is a mechanical engineer and super(handy)man. With his guidance, I built two long wooden boxes, each with a slightly sloped floor to let the water drain through a tube at the lowest end. Brilliant!

After I transplanted my seedlings, I planted potatoes in two buckets designed for that purpose — these buckets are worth buying, in my opinion, if you don’t have a garden, or even if you have a small one — and my little urban garden found its home near the big windows by the balcony.

A big question for those who grow their own food is whether to use artificial fertilizer. Some are against it in principle, while others would not live without it. Since I didn’t have much space and wanted results, I went for the artificial stuff. Little did it pay off, as the only things I managed to harvest before I left for America were potatoes. Good potatoes, though.

Now my wife and I live in a house in South Bend, Indiana, with a decently sized garden. That brings new options, like growing more varieties of vegetables in much higher quantities or even planting fruit trees. It also lets me do the satisfying work of digging up the garden and cutting down trees. Tree removal can be sad, but sometimes it is necessary, and climbing a tree with a bow saw and watching the large branches fall exactly where I want them to — and not on my house or my neighbor’s, for instance — makes me feel quite manly and strong. Taking the remaining branches off with my ax is pretty nice, too. Who needs power tools when you have power triceps? 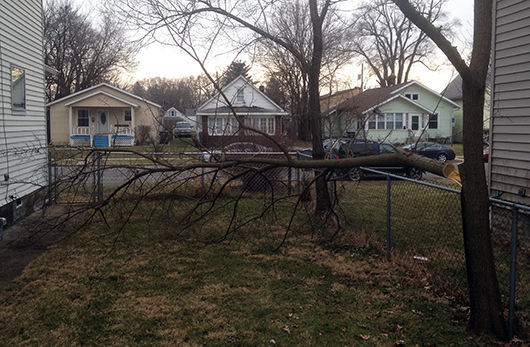 I started the growing last autumn with garlic, which I planted on November 1. Garlic needs frost but is simple to grow. We just bought the kind we like — it should be from a similar climate, but I actually didn’t check that — then picked out the largest cloves and put them in the ground.

Though the garlic became our garden’s first inhabitant, planting it was not the first garden project. Since the last season I have given more thought to the fertilizer issue, and while I’m not against using it in principle, I am in favor of growing vegetables as cheaply as possible. On that basis, and because I see no reason to throw out things that can still be put to good use, we acquired two compost bins — a large one for the garden and a small and airtight one for the kitchen, so that we don’t have to take the scraps outside every time we cook.

Other than stirring the compost and adding to it now and then, winter is mostly a slow time for the urban gardener in northern Indiana. That leaves time for trips to the home improvement store to buy essential tools and all the seeds you could dream of — though I would advise you, if you’re into saving money, to take the seeds from the best of the vegetables that you already buy. And, if you want to be sure you get a quality product that can grow in your area, buy these vegetables at the local farmers market.

We took this trip in mid-February, which in Indiana is around the time you might start a few things like onions in your indoor mini-greenhouse. Some plants are extremely delicate when it comes to weather, so if you buy seeds from the store, make sure not to plant them earlier than advised. If you take the seeds from your bought vegetables, you can look up sowing and transplanting dates for your area online or in a book (I recommend John Seymour’s The New Complete Book of Self-Sufficiency). You can always ask a gardening neighbor or friend for advice, too.

The next step for me was clearing the yard of timber. Then, when the earth was no longer frozen, I started to dig up the garden and got all that nutritious grass into the soil, where it will decompose. The digging is still happening, as it takes awhile to dig up a yard, even with those triceps I mentioned before. So far the experience has been both rewarding and costly: I’ve dug up good-sized rocks for an outdoor fire pit and roots that will feed the fire, but I also broke my first spade and learned not to use it as a lever.

Soon will come outdoor planting and transplanting. I have yet to plan where everything will go, but I have been researching plants that help each other as neighbors. Onions and carrots, for instance, keep each other’s pests away. And I’m keeping the long view in mind, knowing that you should not plant the same kind of crop in the same part of your garden each year, as that drains the soil of nutrition and increases the risk of disease. 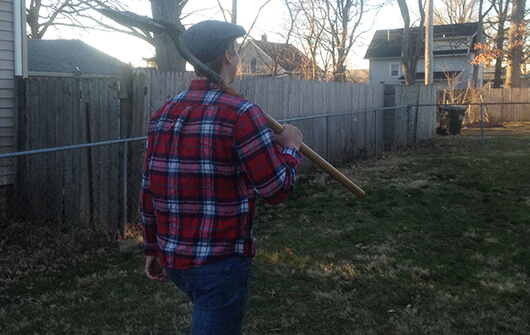 Eventually I would like to add a few animals. I have yet to do precise measurements, but I think we might have just enough room to keep a few chickens in the yard, according to city regulations. Chickens would provide high-quality eggs, maybe some meat, and certainly the droppings that will help me improve soil quality. South Bend even allows residents to keep bees, which would produce delicious honey and help with pollination. I might get stung, but that actually doesn’t sound like a bad deal to me.

All of this is exciting. My dream is to buy a small farm in a few years when we can afford it. But for a relative rookie like me it’s good to start with the amount of land that I have. I can’t wait for warmer weather and to see everything grow. I guess that’s why I find working the land so satisfying. Unlike so much that we do in daily life, it is easy to see how I’m creating something when I grow my own food.