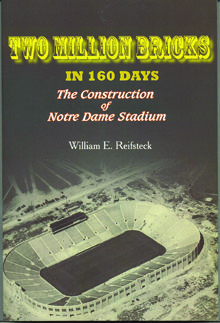 This excerpt is from Two Million Bricks in 160 Days: The Construction of Notre Dame Stadium written by William E. Reifsteck ’78 and published by Corby Books. The book is a story of the construction of the original Notre Dame stadium and how it became one of the great stadiums of the 20th century.

As the concrete work was roaring all around, so also began the careful preparation of the playing field. Early in May the hallowed sod from Cartier Field began to be transplanted to its new resting place inside the stadium. Right after the spring football practice was completed, Brother Irenaeus and Rockne’s players (looking to earn some extra cash) began the arduous task of transplanting the sod from Cartier Field to the new stadium.

Rockne was known to be a superstitious man. His longtime trainer and former player, Eugene “Scrapiron” Young was known to tell many of these lesser-known proclivities. Habits like having the team always exit the field last and enter it first were well-documented. Many of the game-day rituals that are still being used today at Notre Dame had their birth during the Rockne Era. Team Mass and breakfast on game day was one of those rituals.

Some of Rockne’s superstitions had valid medical or physiological reasons. Rockne was a firm believer in controlling his team’s water supply when traveling. He said that it was because of the hard vitamins in the water that Notre Dame Men regularly drank, which he believed was vital to strong bones. For that reason he had his trainer, “Scrapiron” Young, bring 500 gallons of water with the team for every away game to be used for drinking purposes. Another reason was that water in different regions of the country was not as well purified and often would make the boys sick with stomach disorders making them unfit to play on game day.

His infinite knowledge of all things extended even to the science of agronomy. The secrets of planting and caring for turf that he imparted to me were the same secrets that made Notre Dame sod the finest in the land. Authoritative sources concurred in this judgment. Every spring, one thousand pounds of grass seed were broadcast over the entire surface of the athletic field. Rock’s formula for successful turf planting was a mixture of 40 percent blue grass with 30 percent redtop and 30 percent clover. Rock would select a day when climatic conditions were exactly to his liking for sowing. After seed began to germinate, he would have the field completely limed. The lime was scattered to sweeten the soil. Throughout the summer, the grass was allowed to grow freely without cutting. Rock would never allow trimming while weather was hot. A sprinkling system was kept in operation, day and night, as a protective measure. No baby ever received more attention or careful nursing than the grass that Rock planted. Today (1949), Joe Dierricks, Rock’s brother-in-law, carries on in the family tradition. He is caretaker at Notre Dame and maintains the turf as still the best of its kind.

When Rockne insisted on transplanting the grass from Cartier Field to the new stadium, many thought that this was purely the actions of a superstitious man. People thought that Rockne wanted to move the grass because of the fine winning record that his teams had while playing on that field. In reality, however, it was the only way to ensure that there would be a deep-rooted turf available for the 1930 season.

In a letter dated July 29, 1929, Ken Osborn wrote to Fielding Yost that he believed that moving the sod was a waste of time. “Perhaps you will remember that the sod on his [Rockne’s] gridiron is very deeprooted, tough sod, although the grass is not very rich and just now is pretty weedy….If you were in his shoes, what would you do?” The deep roots were exactly what Rockne wanted to have transferred. What Osborn was interpreting as weedy was exactly what “Scrapiron” was describing in his section about not cutting it until the weather cooled.

Rockne also liked clover as its root structure would develop better than bluegrass; however, Osborn thought the clover a weed. Despite Osborn’s protestations that the sod was not worth moving to the new stadium, Rockne, as always, got his way and the stadium grass was transplanted.

Osborn had suggested installing a subsurface drainage system to Fielding Yost when Osborn and Green were designing Michigan Stadium. Despite the cost, Yost grew to like the system because not only did it help drain the field, but it also helped preserve the grass and keep it from getting torn up as easily. Rockne’s coaching compatriots were raving about Yost’s field—how well it drained and how long it took for the ground to freeze. If Yost had it, Rockne had to have the same or better. Rockne had to show up the Michigan coach.

Up until the time that the stadium was renovated in the 1990s, the care of the sod had not significantly changed since the time of Rockne. In the movie Rudy, you can see the field staff in several scenes plugging, liming and planting the field in much the same way that “Scrapiron” described.