I am quite disturbed by the “outrage” over my friend, and my vice-president, Joe Biden, sharing the Laetare Medal with former U.S. House Speaker John Boehner.

I am grateful to the University’s president, Father John Jenkins, CSC, for standing firm against the maelstrom and making it clear there is much more to the totality of being a Catholic than wearing little gold feet on one’s lapel, or carrying a protest sign for one hour a month at a Planned Parenthood clinic. 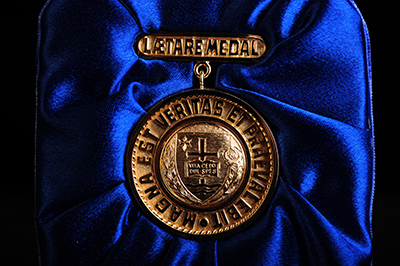 I say that as a rabidly pro-life Catholic — a Democrat who has been in the trenches against abortion.

But more about that in a second.

The Laetare is a medal that recognizes the totality of a person’s contribution to the world around him. It is awarded to a Catholic “whose genius has ennobled the arts and sciences, illustrated the ideals of the Church and enriched the heritage of humanity.”

The late U.S. Senator Pat Moynihan, D-N.Y., pro-choice, received the Laetare in 1992 for his work on welfare reform and making sure hungry people have food. There was far less outrage then.

Why now? Because politics has become so polarized and disagreement has become so ugly — thanks largely in my view to the right-wing media machine that has taken this humbling, beautifully Catholic honor and made it political.

That is precisely the reason why recognizing Biden and Boehner is so appropriate: Two men from opposite parties who have worked together to find common ground on so many issues important to other people.

In reality, in all truth, this anti-Biden outrage is nothing more than political conservatives getting their collective noses in a snit because Notre Dame is honoring a Democrat.

They accuse Biden of not being a real Catholic because of his position on abortion — with which I, too, disagree. The Catholic Church, they say, opposes abortion and thus Catholics must not recognize any fellow Catholic who disagrees for other good work that he or she has done.

OK, then why is there no outrage about Boehner and the tax cuts he supported and the cuts to social programs he pushed through? These are all real-world policies that Pope Francis preaches against.

Why no outrage here?

Why was a left-wing, pro-choice Jew, Bernie Sanders, and not a right-wing, pro-life Christian Ted Cruz, invited to speak at the Vatican?

Because, as our Holy Father has made clear, there is much more to being a Catholic — a complete servant of God — than simply opposing abortion. A true Catholic — a true imitator of Jesus — fights for the lives of babies both in the womb and in the world.

And I say that as someone who has done both.

I am a pro-life Democrat who served in the Pennsylvania House of Representatives for 20 years. I sponsored and voted for the Casey Abortion Control Act of 1989.

I was abused by pro-choice advocates. My home was picketed. I was spat upon by Molly Yard.

I was physically assaulted, hit on the head with a round, navy-blue “Keep Abortion Legal” sign.

So, yes, I have been in the trenches too.

But I also have seen babies born without adequate health care. I have witnessed starving babies — starving children. I have seen babies abused by parents, babies who were not protected by public childrens’ services because they were immorally understaffed. Why? Because of huge tax and budget cuts advocated by Republicans like John Boehner and the present house speaker, Paul Ryan, who is idealized as a model Catholic despite his work to make the rich richer and condemn the poor, the sick and elderly to deeper poverty.

I have helped men and women who are scrounging for work.

Like so many of my Notre Dame sisters and brothers, I have tried to live the total Catholic life instilled in me by my God, my savior, Jesus, my church, and my beloved Notre Dame. Finally, I know the good things Joe Biden has done for so many.

He has done so much more than those who would deny him the recognition of his work.

Thank you, Father Jenkins, for being strong in the face of adversity and hypocrisy. It is what Jesus did at the dinner when the tax collectors criticized the prostitute for washing Jesus’ feet with her hair.

Jesus forgave her sins. He rejoiced in the good that the woman had done.

That is the Christian way.

It is the Catholic way.

It is the Notre Dame way.

Frank LaGrotta is a freelance writer and full-time caregiver for his elderly parents.