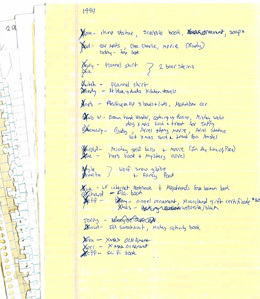 I’ve saved Christmas lists going back to 1991, so I can make sure I’m not buying friends and relatives the same gift I bought them a year or even 20 years ago.

Yeah, I know, way too organized.

This year, as I checked twice to make sure no one is getting a repeat, I realized these lists offer a snapshot of changing times, technology and tastes, not to mention relationships. A certain boyfriend, I noticed, was well-gifted in 1991, receiving presents not only from me but from my parents and sister. Does he still wear the sweater, listen to the CD or use the power screwdriver? I don’t know, but, despite my family’s apparent regard for him, I do know his name is not on my 1992 list.

The 100-cassette-tape rack I gave one of my brothers in 1995 is no doubt languishing in a landfill, while a friend whose job required a lot of driving probably can no longer listen to the books-on-tape I got her in 2000.

I also could follow life’s timeline with my lists of gifts, as toys were replaced by electronics were replaced by wine glasses. I could see where spouses were added or subtracted, babies welcomed. My journey through the lists even had me blinking away tears, when on two occasions the name of someone I held dear was absent the following year, marking an untimely death.

After tracing the anthropological merits of these lists, however, I got an unexpected bonus. For the lists, I realized, actually offered a gift to me.

“The Gift That Gives Right Back? The Giving Itself,” a December 2007 article in The New York Times, explained it best: “Indeed, psychologists say it is often the giver, rather than the recipient, who reaps the biggest psychological gains from a gift.”

This “self-serving nature of giving” certainly hits home to me. I’m a minimalist who loves shopping. Since I don’t purchase much for myself, buying for others fulfills my shopping jones.

It also makes me feel good, a double-dipping deal if I’ve ever seen one. Essentially, as Dr. Ellen J. Langer, a Harvard psychology professor, noted in the article, I’m giving myself the emotional boost of feeling “effective and caring.” All that while gifting someone else. Score!

This leads to a major problem for minimalist-me, however. By discouraging others from buying me gifts, I am not, in Dr. Langer’s words, “giving them the gift of giving.”

Rats. The only way out of this Christmas conundrum, it seems, is to create my own hint-list. And I’m guessing “donation to Goodwill” isn’t appropriate.

So excuse me while I check out some catalogs. It’s time to be Santa, and give others a chance to buy me something.