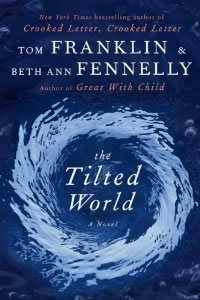 “What happens next?” an audience member, her voice an urgent plea, asked when the reading ended. That’s exactly the question a novelist wants to hear at a reading — people so involved they are hanging on to the story.

In this case, make that novelists, plural, as the authors doing the reading at a June 1st afternoon session of the Notre Dame Reunion weekend were Beth Ann Fennelly ’93 and her husband, Tom Franklin. Their novel, The Tilted World, was a team effort, the first by the couple who each have published books in different genres.

Fennelly is an essayist and Pushcart Prize-winning poet while Franklin is an Edgar award winner and New York Times best-selling author of fiction. What made audience members want more was The Tilted World tale of Dixie Clay, a bootlegger; Ted Ingersoll, a federal agent; an orphaned baby; and the great Mississippi Flood of 1927 that killed almost 250 people in seven states.

Fennelly told the audience that writing the novel was a three-year odyssey, “and it was really fun . . . it was fun to do it with my best friend.”

The couple also had some fun with side characters in the novel, particularly when describing the post-World War I work history of Ingersoll. Seems that at one point the federal revenue agent was in Indiana, checking on bootleggers. In South Bend, he investigated the Nanni brothers, “who ginned for the big, merry priests of Notre Dame.” Lou Nanni ’84, ’88M.A., is Notre Dame’s vice president for University Relations.

Although neither Fennelly nor Franklin would give away the “what happens next?” answer, they were happy to address questions about their work methods and the background of their historical fiction.

They called their work style “dueling laptops,” Fennelly said, as they would each write the same chapter, compare notes and decide what would work for the final version. An earlier method, in which they wrote separate chapters, “had been really hellish for me,” Franklin said, particularly when his wife would finish writing before he did. “I felt strangely jealous,” he commented, a wry confession that brought laughter from the audience.

Because The Tilted World is historical fiction, an audience member wanted to know, “When does the research stop and the writing begin?” The question drew a knowing smile from both authors, and Fennelly confessed that it was difficult to leave the research for the writing. “There comes a point where you realize that researching is actually procrastinating,” she said.

That might not be an issue for Franklin. “I’ve been late on a deadline since 1998,” he said in his soft Southern drawl.

The couple, parents of a 12-, 8- and 2-year-old, said they are talking about writing another novel together. For now, they are gearing up for an autumn book tour when William Morrow releases their current novel. As for the ending, the anxious listeners, who were left with Dixie hanging on in the tall branches of a tree as the flood waters rose, will have to wait until October 1 to finally read The Tilted World.