Fifth in a series of student-written pieces that accompany the article “What’s Best for Them,” by Kerry Temple ’74, published in the autumn 2016 issue.

Only my very closest friends and family had seen me cry before I came to Notre Dame. But at Notre Dame I lived with more than 200 other girls. They were friendly, busy, impressive and stressed. They didn’t hide that. So they cried in the hallways, they cried in the study rooms and they cried on their phones. I cried too. Bonding over the endless hours of work and pitiful hours of sleep was a relief. 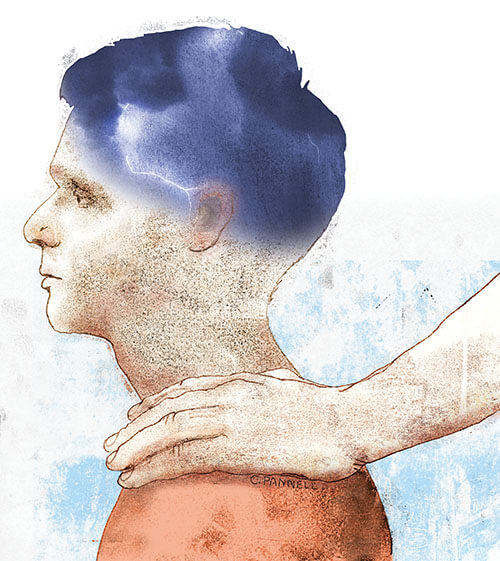 At Notre Dame it’s ideal to appear invincible, but the next best thing is to appear overwhelmed, because that shows how much we are doing. The hugs and encouragement that ensue help assure us that we are on the right track and will succeed, even though it’s daunting.

When I came to Notre Dame I considered myself adept at defending my own values and saying no when I didn’t think something was right for me, but here it seemed like I could drop my guard and fit in smoothly with my peers. It took me until the middle of sophomore year to realize that in my eagerness to become a Notre Dame student I was leaving myself behind.

Luckily, it was also during sophomore year that I heard the two most important things anyone said to me at Notre Dame. “Life is long,” was one thing. “We are human beings, not human doings,” was the other. And I began to say no to the culture threatening to envelop me.

A typical Notre Dame conversation starts with questions about how each person is doing and a subdued response that things are fine (implying that the person is tired and stressed but surviving). This is followed by an exchange of workloads, each person explaining all that’s on her plate that night. Of course, if one student only has a single paper or reading, there is a quick addendum explaining the group project meeting, office hours and club event that are also on the night’s schedule. The conversation often ends with impressed exclamations about all the other person is doing.

A quiet victory is awarded to the person who has the longest, more admirable list. As a freshman in the College of Science, with labs that put me in class an average of six hours more than my non-science peers each week, I often had the longer list and, thus, felt successful. I was doing a lot and I was doing okay. Of course I no longer got straight As, but college was different from high school. Especially at Notre Dame.

A sense of urgency pervades campus: Things must be done, now, before it’s too late. My dad still talks about the senior he met as he helped me move in freshman year. She told him that it went so fast and she sure wished she could be in my shoes back at the beginning again. Before I had even moved in, I felt anxious that I only had four years.

Soon that seemed like a long time compared to the year and a half I had to confirm my major. The freshman-major crisis is a common phenomenon in which classes are dropped, career center appointments made and one’s fate and future are carved into stone. The urgency continues through the years as applications to study abroad during junior year are due at the beginning of sophomore year, and students meet with increased pressure to find an impressive internship with each passing summer.

This sense of urgency is visible every day, as students constantly check the clocks on their phones to make sure they aren’t late to the next commitment. It’s common to eat a meal while a friend’s phone buzzes on the table and to share her attention with whoever she is texting. Notre Dame students do a lot, and many of us do it all at once: scheduling our weekend plans while we’re in a group meeting, recapping on Thursday night while sitting in a lecture, and hanging out with friends while planning when we’ll complete all of our work.

During my first two years I transformed from someone who kept a pay-as-you-go track phone in the glove compartment of the truck to someone who stopped mid-conversation to see who just sent that text. My parents’ disapproving looks when I was home on break and my own guilty apologies made me realize that this wasn’t a habit I wanted to keep.

I worked to break it before it became too hard to do so. Putting my phone away during meals, taking notes in a notebook rather than my laptop and not doing anything else while I Skype a friend — I’ve tried to give each thing I do my full attention. I try now to say no to a culture of doing everything with only a fraction of my focus. Yet I still groan at myself when I realize I tuned out a homily while frantically planning the rest of my night, or when I go on a walk only to find myself making mental lists of what to do the moment I return home.

So when Tom Bettag, a former executive producer for ABC, CNN and NBC, told our multimedia journalism class that “life is long,” they were the most welcome and influential words I had heard at Notre Dame. Life is long? This was the refreshing encouragement I needed. There would be time for my dream backpacking trips, time to find a job I enjoy and time to learn more. Life is long enough that I can live today rather than stress about tomorrow.

Still, at Notre Dame there seem to be simply two approaches to relaxation. Sometimes you work hard during the day so you can party hard at night. And sometimes you stay in and do a work-play combo. Since I prefer adventures involving hiking boots and water bottles rather than high heels and Solo cups, I often fell into the group that tried to relax at the dorm while also doing some work. Or so I thought.

Since the workload is eternal, it felt productive to skim through readings or make flashcards while watching movies with my roommates. Of course, I knew I was not being as efficient and could have worked faster without distraction, but I figured some work was better than no work. Even when watching an away football game or a movie, it was common to see laptops out, papers in progress and eyes flitting between two screens.

By sophomore year I realized how destructive this was for me. It created the illusion that I could not escape my work. I began setting my laptop down when I chose to take a break and seeking other options beyond movies and parties. It sometimes still feels wrong to not be stressed while taking a break, but learning to relax has helped me be more efficient when it’s time to work and setting aside time to play has made me more joyous.

So I said no to the culture of perpetual work, too.

I recently accompanied a class called American Wilderness on a field trip the professor described as a “reprieve from Notre Dame.” Participating in the scavenger hunt she’d designed meant I got to explore the exhibits at the Indiana Dunes National Lakeshore Visitor Center and experience 30 minutes of hiking in silence. I got to chuckle at my friend’s gleeful exclamations about orange fungi colonizing a log, bemoan the massive smoke-stack marring the otherwise brilliant lake and admire how much warmer its water is than the Pacific Ocean.

It took conscious effort to leave my worries back at school, but I’m grateful I have developed the ability to do so. While Notre Dame professors expect a lot from us, what they really expect is that we’ll learn to make our own decisions. The decision to be overwhelmed by stress lays heavily on us.

Bree Haler, an assistant director of evangelization in Campus Ministry, repeatedly told my group of sophomore “Compass Leaders” that we are “human beings, not human doings.” In the moment, that sounded like a lovely cliché. But, in retrospect, I realize it is the second most important thing I heard at Notre Dame.

It had been easy to fall into a culture of constant achievement, constant goal-setting and constant doing. There were many times in which I almost missed those campus ministry sessions, telling myself I had too much to do. But whenever I went to the prayerful, thought-provoking meetings I felt refreshed, renewed and so grateful I’d come.

After four years at Notre Dame, I know how to do homework and I’m an expert at color-coded to-do lists. But stepping out of this rhythm, saying no to this perpetual doing is what took real effort. Being me may actually take more practice than being another stressed Notre Dame student, but regardless of what I do, I’ll carry this skill throughout my whole life.