Editor’s note: This is one in a series of student-written pieces that accompany the article “What’s Best for Them,” by Kerry Temple ’74, published in the autumn 2016 issue.

Halfway through the interview, he asked me, “What else will you be doing this summer?”

I was confused. “What do you mean?” I replied. 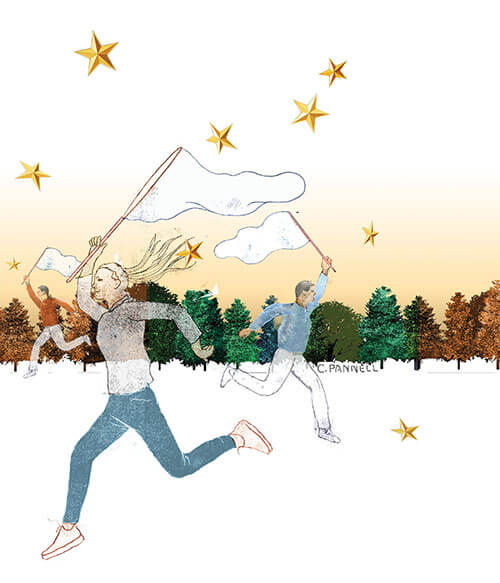 “I mean, what is your main reason for being on campus?”

“Oh, just this,” I responded in my professional-yet-cheerful interview tone.

I could see his surprise, and I understood. Most people don’t join the summer residence hall staff for the sake of being on summer hall staff. Other Notre Dame students who were applying to live and work in the dorms were only doing it as a way to receive free housing while they held more noteworthy positions elsewhere.

I had tried that, too. Earlier in my sophomore year, I had sent my resume to a few internships that looked like they might be mildly amusing, but nothing came back. I had spent a month applying and interviewing for the opportunity to work with the State Department in South America, but was only offered an alternate position in Suriname. I had spent some time entertaining the idea of doing research abroad as I had seen so many of my peers do (it sounded so romantic and scholarly), but a solid idea never coalesced.

Suddenly it was March. Spring break. Only half a semester until summer, and I had no idea what I would be doing. What’s left? I was sick and tired after having spent nearly all year looking for some way to spend my summer, and mid-semester stress was already weighing me down.

So when I saw that the housing office needed people to work in the dorms, I thought maybe I needed a different kind of summer.

And it was nice. There isn’t much to say other than that. I worked a few part-time jobs to make a full 40 hours. I made new friends. I went to the dunes on my days off. Most importantly, I had time to slow down, clear my mind and experience what it is like to be in just one place at just one moment in time.

But I didn’t have some exciting or challenging or exotic experience, and it wasn’t remotely related to anything in which I hoped to make a career.

Next summer, I told myself.

I began to think about my plans for next summer in September. In November I got excited. By December I became anxious. And by March I was wrestling with crippling worry and uncertainty.

Business majors notoriously have their summer internships locked down as early as September of the previous year. Engineering majors are not far behind. It is not uncommon for pre-med students to have a strategic four-year summer plan comprised of service, research and MCAT preparation.

As a philosophy major, I have come to firmly believe — perhaps only by faith or by mantra — that the common consolation given to Arts and Letters students is true: What you major in doesn’t matter.

But no one would dare say that about the way you spend your summer break.

When I tell friends at Notre Dame that my friends from home who attend state schools are working at coffee shops or babysitting for the summer, I am often met with looks of horror and shock that someone would spend their time doing something so . . . practical.

At elite schools, summers are sink or swim. You need to do research in Third World countries. You need to get a foot in the door at JPMorgan. You need to build a startup. You need to work for an international NGO. You need to prove what you can do. And for liberal arts students who do not plan on going to graduate school, it is even more important that your summer is relevant to your future goals. (And if you haven’t figured out your future goals, then you’re already a failure.)

What this means is that students may spend nine months of the year searching and applying for summer positions. The time alone it takes to do this is one thing. The stress of being rejected is another. Of course, there’s the difficulty of managing money and finding funding for unpaid opportunities. Even more, the challenge of finding housing. And sometimes, the hardest part is simply the pressure of feeling like all of this is required of you.

I’ve been wanting to learn the mandolin, practice Spanish, write more, learn to build a website and catch up on reading — books of both intellectual and personal interest. But if I spent my summer doing these things — none of which are worthless — I couldn’t put it on a resume. And according to the expectations that surround me, it would be a wasted summer.

Perhaps it is a childish wish to want a summer without a title — to have the time to learn things for the sake of learning them and to do things for the sake of doing them. To escape the stress of the academic year in which the future is a constant worry and each assignment feels like a painful means to an end.

But I think it is a common wish felt among Notre Dame students. While it is important that we are looking ahead, we need to allow ourselves some time off, as summer breaks were once believed to be.

Lara Dulin is a senior philosophy major from Kenton, Ohio, who sings in the liturgical choir.