10 Trends We Need to Bring Back

This list comes with a caveat: In our modern world, a creative Internet search could probably turn up devotees of any cultural flotsam that has been discarded by mainstream society in the last 200 years. Yet in the midst of our fragmented milieu, some of these dedicated are on to something. There is wisdom in reclaiming some of the once ubiquitous. 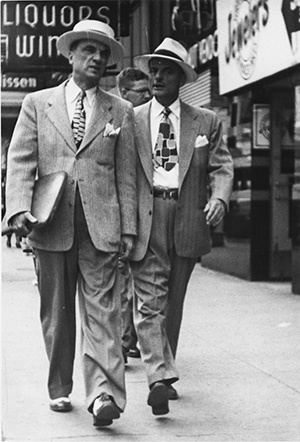 Formal hats for men: No, not trilbies from H&M or those tiny straw fedoras from Hot Topic that have become breathtakingly awkward symbols of misanthropic weirdos — I refer to actual, well-made, functional hats that can be worn with everyday office wear. Hopefully one day, bald folk can wear one without being assumed to be undertaking a societal statement.

Mixtapes: There was a romance in the early technology of putting together mixes of favorite songs. Unless you had a dual-track and extensive cassette collection, you had to wait with the radio on and the finger poised over record, just hoping to catch a new favorite. For young audiophiles in the 1980s, it was their first introduction to the concept of serendipity.

Hacky sack: A refuge for the relatively unathletic teenagers just getting into Bob Marley, the little sewn package with plastic beads inside was a great way to make friends in the 1990s. Reggae doesn’t blend well into the background of Quidditch (I assume).

Pants: On a college campus, one can go a whole day without seeing anyone under the age of 45 actually wearing real pants, meaning ones that are incompatible with exercise and efficient napping. James Dean won jeans for you; that should be enough.

Renting VHS movies: The advent of streaming services, high-definition televisions and all manner of entertainment technology is an unmitigated win for consumers who value great and abundant quality of choice. However, there was no easier litmus test for the morality of your community than those who actually followed the directions to “Be Kind, Please Rewind.”

Individual offices: From the classroom to the boardroom, everyone has spent the last 30 years assuming more is accomplished with enforced spatial collaboration, no matter the studies showing the contrary. Privacy and silence are underrated creative assets. Work is work, not a family reunion.

Cheap special effects: The increasing sophistication of computer-generated imagery has allowed filmmakers to weave entire imaginary worlds out of nothing but green screens and computer programming. So how come Star Wars space battles with plastic models and a shoe in the background look so much better?

Starter homes: Americans aren’t always ones to graciously downsize, so let’s start with the newbies. Fields of suburban mansions detached from places of work and community should be a thing of the past; let’s rebuild neighborhoods with families of four living in houses meant for families of four.

Tecmo Bowl: No one has ever improved on the standard bearer for sports video game excellence. Just don’t let the other guy play with Bo Jackson.

Sincerity: The earlier part of the 2000s saw a sweep of think pieces opining on the impending death of irony due to the serious geopolitical challenges of the day. If anything, the reverse has happened, as bite-sized news and democratized digital megaphones turn everyone into a late-night talk show monologue writer. It would be nice to have knee-jerk reverence for a little bit instead of knee-jerk snark.

— Liam Farrell ’04 is a premature curmudgeon who lives in Maryland.

From Frontier to Suburbs in 10 Easy Steps

A Generation X guide to how things went awry.

The frontier myth
The frontier myth explained U.S. history as the interaction between European people and North American free land. The frontier triggered Americans’ individualism, democracy, self-reliance and ruggedness as well as their love of chaps, tall hats, red meat and camping.

Cowboys
The publication of Theodore Roosevelt’s Ranch Life and the Hunting-Trail (1888), Owen Wister’s The Virginian (1902) and the popularity of such Western artists as Frederic Remington merged the frontier myth with a particular type of livestock industry employee, the ranch hands who worked in nature on horseback.

The Marlboro Man
The central figure in an advertisement campaign begun in the 1950s, the Marlboro Man borrowed cowboy iconography to sell a new type of cigarette to male smokers suspicious of the gender implications of a filter separating their lips from burning tobacco. The cold, blue eyes and granite visage of the Marlboro Man soothed the fears of even the maddest men.

Secondhand smoke
Unfortunately, Marlboros did not come with filters on their lit ends. Exercising their right to be free and light-headed, Americans puffed in bars, homes, cars, airplanes, movie theaters and restaurants. My demographic cohort, Generation X, emerged in this cloud of smoke.

Lawn darts
To escape murky interiors and reconnect suburban children with the American tradition of wielding deadly metal implements in the outdoors, Baby Boomer parents sent their progeny into backyards to play this pointy version of horseshoes. (Note the subliminal connection to the cowboys’ rides.)

The way-back
Secondhand smoke and lawn darts enhanced the deadliness of the suburban frontier, but no childhood venue defined the lawlessness of child-rearing in the 1970s more than the nether regions of station wagons. Here feral youths rattled around unfettered, imbibing the freedom of unregulated, laissez-faire democracy.

Eight-track car stereos
Every rolling frontier adventure needs a soundtrack, and eight-track players empowered front-seat commanders with the freedom to choose the music to enliven their wanderings. Adults could crank up music to drown out the howls from the savage way-back.

Cassette tape players
Eight-track stereos promoted automotive individualism and musical freedom, but suburban frontiersmen and women could not rewind eight-track cartridges, ergo their inability to decipher the lyrics of songs like The Knack’s “My Sharona” and ELO’s “Don’t Bring Me Down.” (My childhood was haunted by the mythical creature known as “Bruce,” who wanted nothing more than to bring me down.) Cassette tapes represented the American tendency to adapt their technology to settle chaotic environments. The tapes could be fast-forwarded and reversed, and when synced together, two players could produce the most important frontier innovation since the Colt revolver . . .

The 1980s mixed tape
The apex of suburban frontier existence, the mixed tape fostered the freest expression of individual taste and emotion, not to mention supplying the thrill of mass outlawry via copyright infringement. The propagation of the suburban species depended on the romantic spark generated by a carefully chosen tune combination. Chris de Burgh’s “Lady in Red,” coming after The Go-Go’s “We Got the Beat” and the J. Geils Band’s “Freeze-Frame,” launched epic make-out sessions that fertilized entire family trees. Alas, when frontiers reach a heightened level of technological and civic development, they settle down and die.

The proliferation of lists
Personal MP3 devices, toy regulations, seatbelts and smoking bans signaled the demise of the 1970s suburban frontier culture. Yet no post-frontier phenomenon spreads more decadence and confusion than the proliferation of lists as content on integrated media platforms. The best 1980s mixed tapes were artisanal creations. The compilers put sweat, thought and heart into their lists. They curated those things like blacksmiths at a forge. Today’s lists of fat-burning techniques and quinoa recipes bemuse, but they pale next to the frontier prototypes. They lack verve, ingenuity and a certain American spirit. Life was tougher back in the old days, but our lists were bold, internally logical and true.

— Jon T. Coleman is a Notre Dame professor of history.

Things No One Ever Told Me

— Tara Hunt is an associate editor of this magazine.