One time I was at a school near Melbourne, Australia. The school was on the farthest-flung outskirts of the city, and I had noticed the buildings grow sparser and the bush more pronounced as we drove north. My host named the trees for me: ironbark, gum, fig, wattle, beech. I saw two kangaroos, the first two I had ever seen.

At the school I was supposed to talk to the students about literature and spirituality and anything else that seemed pressing to them, said my host, a genial soul who understood that the students, if engaged, would be curious about someone from the other half of the planet away, and what language he spoke, and what concerns and pains and graces were the common coin of his country, of which they had heard a great deal, mostly having to do with violence and music and money. I asked about the students, and my host told me they were mostly 17 and 18, and generally bright and diligent, though they were just back from Christmas break and were still getting back up to speed in academic matters. 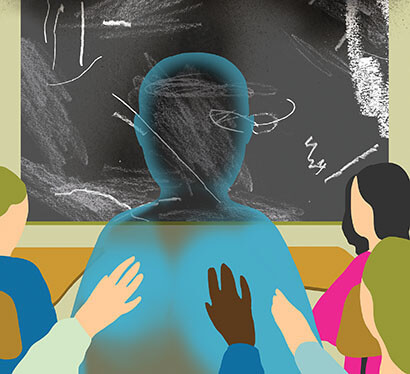 They’re a little rambunctious yet, said my host, who noted, too ,that their range of ethnic backgrounds revealed something of modern Australia — there were students of Chinese and Japanese and Malaysian ancestry, and Irish and Scottish and English, and that tall girl is the daughter of parents from Finland, and that slight girl’s mother is from Montana, and those two boys are of aboriginal ancestry — which reminds me, said my host quietly, that the taller boy there, the one with the blue jacket, his parents were both killed in a car crash over the break. They were going upcountry to see their people while he stayed behind with an aunt. They were Dharawal people from the coast near Sydney. Terrible thing. A trucker fell asleep at the wheel and crushed their car. The poor boy. No siblings. He was quiet before, but he’s quieter now. Just something you should know before you speak.

To my delight, the students were engaged, and curious, and bubbling, and hilarious, and witty, and challenging, and boisterous, and we had a great talk about sports and creativity and lies and racism and the prison of power, and they asked me a blizzard of questions about America, and if everyone there carried a gun, and did I know Bruce Springsteen, and if we assumed that half of what our politicians told us was the most airy lie, as they did in their country, and then a bell rang and they had to leave for their next class. I stood by the door and shook hands as they left, and I was moved by their honesty and humor, and still am.

When they were all gone I stood with my host for a moment and talked about the boy in the blue jacket. Did you see? asked my host, and I said yes, I had seen the way his mates touched him gently on the elbow and shoulder as he made his way to his seat, and how they’d saved that seat for him, and how a girl tossed him her pencil when he was patting his pockets for a pencil, and how, when they were filing out, hand after hand after hand touched him gently on his elbows and shoulders as he passed, without a word being said, as far I could tell.

Yes, I had seen that, I said to my host, and it seemed to be exactly what we mean when we say love and pain and holy and sorrow and condolence. It seemed to me that all of his mates were saying something to him without saying anything. Maybe there are many things you can say silently that are more eloquent than words, said my host. Maybe so. And you a writer and me a teacher, both of us so word-addled; but maybe the more we revere what words can do at their very best, the better your sense for where words end and another sort of eloquence takes over. Maybe so.

Brian Doyle is editor of Portland Magazine at the University of Portland, and the author most recently of the novel Chicago.