In September of 1974, I answered an ad in The Observer announcing tryouts for the Irish Guard. At 6’2”, I met the minimum height requirement, and I was an athlete in high school. The voice at the other end of the phone line sounded quite flustered and said he would have to get back to me. About 30 minutes later, a priest called with the goal of making sure I understood how “bad of an idea” this was. His main defense was that the men would be “protecting me.” I quickly got the feeling that this was going to be a losing proposition and relented. It took 26 years of women on campus for this barrier to fall. I truly regret not having been more persistent during my freshman year!
— Laurie Reising ’78 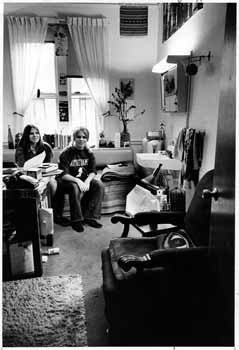 Once in an academic building, I walked into a ladies room. When I got in there was a urinal. I was confused so as I walked out I looked at the door and it said “men” on the inside of the door. Embarrassed, I walked out thinking I had made a mistake. When I checked the front of the door it indeed said “ladies.” They had neglected to remove the urinal and just turned the door around. They weren’t exactly ready for us!
— Terry Halliwell ’80

In the 1980’s at Notre Dame, there was nowhere indoors for women to exercise except for running around the top floor of the ACC. I took some aerobics classes at home in Tampa and had the Jane Fonda aerobics “album.” (It was an actual vinyl album.) I would lead aerobics in the chapel of PW using a record player. (Once the video came out I realized I was doing several of the moves wrong!) It was quickly popular, fun and built community in our new dorm. Later, I held a student job in non-varsity athletics so I asked my bosses if we could use a gym for aerobics classes. They said sure, and soon I was leading hundreds of women and a few brave, perhaps girlfriend-seeking-men every day in the ACC.
— Laurie Cuffe Kelley ’83, ’84MBA

I came to ND as a legacy in the fall of 1975. My dad had started in 1940 and graduated in 1948, interrupted by WWII. Having two brothers and no sisters, I was comfortable in the male-dominated environment. In one class, as the only female, I was asked for “the women’s opinion” on a particular issue — somewhat daunting! Another day, during a gym class racquetball tournament in the Rock, I was rapidly eliminated. However, as the winner of the tournament was announced, they also announced that I had won (in the women’s division?). Each of us “winners” received a Hershey bar.
— Karen Burns Clark ’79

Late one cold, Saturday night, I began to walk my girlfriend to the St. Mary’s shuttle from Stanford Hall. As we stepped out, we were both hit by Keenan pranksters who dumped trash cans full of water from the top of the lobby. We were drenched. We went back in, and she changed into some of my clothes. We missed the last shuttle, so I walked her back to St. Mary’s. Later, she returned my clothes and remarked, “Boys’ underwear is a lot more comfortable than girls’ underwear!” (Briefs if you must know.)
— Jeb Cashin ’83 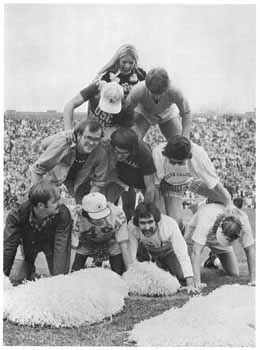 While in my second year of law school at ND I came down with mononucleosis. Lumps the size of oranges sprang up under my jaw line. I was on scholarship and not about to blow the best opportunity of my life, so I got dressed and walked across the quad to the infirmary. I was determined to receive a quick cure and requested admission only to be told, “We’ve never had a woman admitted here before!” I responded, “You do now.” They cleared a whole wing — I wasn’t sure if that was a result of the contagious nature of my ailment or of my gender. I am happy to report I not only returned to classes after that week, but that my classmates stood outside my second story window and class notes were pullied up to me. This was at the same time the movie Paper Chase was depicting law school as such a toxic environment that students in the movie were stealing notes and books from the library. Thank you, Dean Shaeffer for working to create a more humane environment to study law and solve problems.
— Valerie Kanouse Balsama ’74J.D.

I was in the second graduating class of women at Notre Dame and began my academic career in 1973. During that year the school announced walk-on tryouts for the basketball team. Unfortunately for them they did not say “men only.” Joya (J.J.) Defoor and I decided we would make a statement (don’t ask me what) and decided to try out. We created quite a stir. When the coach decided to divide up the tryout into teams, “shirts and skins,” he put Joya and me on the “skins” team. Noticing how we looked at each other and the snickers in the crowd he said, “Don’t worry girls, I think we’ll know which team you are on.” I was not brave enough to actually get out there and scrimmage with the guys — I didn’t want to give them the opportunity to make an example of me!
— Phyllis Mosley Lee ’77

100 words or less? It would take most Farley sisters of mine 100 words just to say “Hello.” But, as brief as I can be for a “Farley Girl,” the truth is we “pioneers” never realized during those years that our college experience was so unique, challenging and ultimately awesome. Where else could you walk into a class and be the only woman in the room? Where else would professors be SO AMAZED that girls could be just as smart as the boys? (Actually we had to be smarter just to get in at that time.) Where else could you meet and chat with Ara Parsegian, Dan Devine, Digger Phelps and Father Ted Hesburgh? Thank you Father Ted for getting things changed to get us there and for your always open door for our feedback — it gave all of us “pioneers” a say in creating the co-ed Notre Dame. We did not know the special role we had in the history of our great alma mater and in making it even GREATER. Loyal sons AND DAUGHTERS . . . Love thee Notre Dame!
— Nancy Michuda ’78