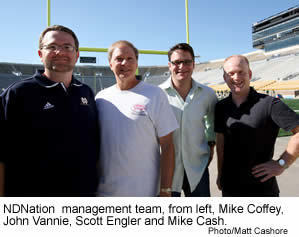 I first became interested in the NDNation.com site when my eldest son was temporarily banned from posting on it.

NDNation, as any graduate familiar with the blogosphere will tell you, is the primary website for user-generated content about the University, as well as for interactive sharing. It has become the preferred social networking venue for Domers, many of whom have bonded since matriculation, as well as for the eavesdropping universe of those who love or hate the University without ever having had to pay its tuition.

Countless other small cybergroups have Notre Dame connections. Their diversity is typified by an alumnae breast-cancer recovery support network and by a group whose members met one another on the London program in the early 1980s.

These and other such groups discuss parenting, relationships, growing old, depression and spirituality across the Internet ether. In a recent count, there were 448 Notre Dame-associated groups on Facebook, 184 postings on YouTube and 67 on MySpace, to name the most familiar online networking sites.

But when you are talking big numbers, like 6,000 registered posters, an estimated 30,000 lurkers who read but don’t post and 20 million hits monthly, you are talking about NDNation.

The site began in 1999 as a place to discuss football recruiting and has been nurtured over the years by three Notre Dame alumni and a graduate of the University of Delaware. The Notre Dame graduates are Mike Cash ’94, a resident in internal medicine in New Orleans; Mike Coffey ’91, Oak Lawn, Illinois, the author of a book on Irish basketball and a data base administrator, and John Vannie ’75, San Diego, a senior manager for a defense contractor and author of several articles on Notre Dame football. The fourth manager is Scott Engler, a former television journalist and now a consultant on the medium to business executives.

NDNation carries no paid advertising and has no fees. Expenses such as server costs, state and federal taxes, post office box rental and underwriting one tailgate a year for patrons are paid from donations.

Even more than football

The first screen you encounter on NDNation is (surprise!) athletics-oriented, helping rank Notre Dame along with Southern California and Michigan as a leader in team-specific blogs. A typical day includes standard sections on football and men’s and women’s basketball, with links to current articles in other publications. There is frequent advice to the athletics department on improving ticket-handling and on how to preserve the “brand” of Notre Dame sports (Jumbotrons are bad, but corporate boxes can be okay). In a throwback to its origins, the site this day has a graph tracking the resurgence of football recruiting, and it provides a headline link to a story on the makeover of the Joyce Athletic Center.

You can find the philosophical core of NDNation in a sequence of perhaps 100 messages posted in 2005 in response to the question, “What has ND’s football tradition meant to you?” The central belief thread is Tradition (with a capital “T”), the weave is football and the tapestry is the weekend festival that surrounds the game. One occasionally finds the stereotypical “old Notre Dame” here, the angry populist resentment of contemporary decision-makers (“real estate salesmen, blazer-wearing phonies”) and what they have wrought (“pale, anemic, lace-curtain Irish tea party”). For these dyspeptic folks, someone has destroyed Tradition, weakened football and leached the glory from Saturday afternoons.

At the same time, there is something to admire in the memories that float across the screen. To the pre-coed generations writing, Notre Dame is a patrilineal bloodline, bequeathed by grandfathers and fathers. The bond with Notre Dame is equated with the bond of family, often one with immigrant roots. “There were times when my father and I did not see eye-to-eye,” admits one writer, “but there was never a time when we could not talk Notre Dame football.” There are small grace notes still savored over the years—a kiss-of-peace handshake at Mass from Lou Holtz, a thank-you note from Chris Zorich for a sympathy card on the death of his mother, written, the respondent notes, from Bears summer camp.

Notre Dame emerges from this collage of remembrance as a symbol of values no longer in vogue but still worth preserving. The image at times contains a whiff of anti-intellectualism, as in “Notre Dame was not great because U.S. News & World Report said so. It was great because of our shared experiences and the indelible marks those moments made on us.”

Emotions run high around the gridiron and the court, and fan neuralgia is most evident on NDNation during football and basketball seasons. There is no telling how much is coming from graduates, as opposed to subway alumni and others, because alumni status is not asked when a person registers for a “handle,” or nickname used for messaging. “Some of our high-quality contributors never attended Notre Dame, while some of the users who cause us the most trouble have ND sheepskins,” note the site operators.

My son’s brief eclipse from NDNation came about when he predicted Charlie Weis as Notre Dame’s next football coach. Reacting to derision from other posters, he boasted that if the Weis appointment did not occur by a specific day they could ban him from the site. The day came and went without any announcement, and his posting privileges were suspended. Weis was named a few days later, and my son was back on the message board.

The founders are sensitive to the charge that their site is heavily flavored with anti-institutional opinion. Neither the “Dump Davie” movement nor the so-called “C4C” (Call for Change) letter by disgruntled alumni to the Board of Trustees was initiated on the site, but they were prime fodder for its message boards. “We are and will continue to be an independent but largely positive influence on Notre Dame, although we will not always agree with the university’s direction and policy,” comment the founders. “University matters are discussed by people who are both intelligent and passionate and provide the administration a chance to hear an opinion or approach they may not have considered.” In brief: We’re the canary in the coal mine.

Before one dismisses NDNation as a place for would-be directors of athletics and hard-core fans, one should visit the site’s Back Room message board, which has garnered a reputation as a place to discuss issues beyond sports, even get honest travel and food suggestions. “A not insignificant number of patrons post solely on that board,” observe the founders, “and it has attracted some people who don’t like Notre Dame athletics but do like the University’s sense of community.”

You know immediately that you are in a Notre Dame milieu when the Back Room guidelines gently suggest it is not necessary to post responses to prayer requests (“Please accept that people here are good for it.”). The range of topics in the Back Room reflects the diversity on the Internet itself. An account by a veteran of the Iraq war explains how insurgents pay poor Iraqis (say, $100 for firing a grenade at a U.S. convoy) to do the scut work of guerrilla warfare. A story details how porn star Jenna Jameson ended up with a Notre Dame cap for her father, a putative Irish football fan. Between those two stories lies the topography of the blogosphere.

Here is a sampling of topics recently posted: an inquiry about elbow surgery; thoughts on the architecture of megachurches; requests for a Chicago hotel room under $250; advice on how to put together IKEA furniture; discussion of Eddy Street development near campus; brief eulogies for a former Irish football player; prayers sought for a sick spouse; a critique of The Tudors on Showtime (“Protestant propaganda”); Lou Dobbs and his take on immigration; recipes for cooking cicadas and a make-of-it-what-you-will statement: “Jack Bauer doesn’t speak Arabic, but he’s saved the world six times.”

Football is muted in the Back Room but not entirely absent. A posting asking whether the movie Rudy was good or bad for Notre Dame drew 135 responses in 94 minutes. The Back Room also carries spot news. Student photographs of severe May wind damage on campus provided graphic coverage superior to the South Bend Tribune.

Perhaps taking a cue from the success of NDNation, the Alumni Association recently announced a state-of-the-art social networking site, alumni.nd.edu. The Development Department has been inviting alumni to contribute stories of shared traditions to supporting.nd.edu. It remains to be seen whether these sites become serious rivals for NDNation. One thing is certain: You won’t need a handle.