Back in June 1995, when Walt Collins was retiring after 12 years as editor of this magazine, he handed me the little potted cactus from his windowsill. “Here,” he said, “you can have this.” I was glad to keep it. It reminded me of the backpacking trips we had made together over fall break for almost a decade, usually to the Southwest where October temperatures and empty landscapes made us happy — and the starry skies were so beautifully infinite we could stand for hours in silent humility and awe. 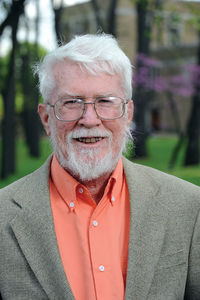 Some years later, over lunch, he told me about his Parkinson’s diagnosis. “You and I have hiked through some of the prettiest country on earth,” he said, “and someday I’ll struggle to walk across a room.”

Walt died September 24, 2018; he was 88. And in those final weeks, right near the end, he still had his full-face smile, his bright eyes deep pools of blue. I knew that smile, the one that said he had figured out life’s secret and found it humorous. The beam in his smiling, embracing eyes made you think you knew the meaning, too.

For 20 years Walt was a true-blue newspaperman, back when the daily paper was a major voice in civic well-being. He was a consummate journalist, a community figure. We knew him here as a lucid writer, an extraordinarily fine editor. He had firm resolve and protected the integrity of this magazine, but with a grace and amiability that kept critics on the periphery while astutely steering through churning University waters. Walt made sure the magazine represented the best of Notre Dame. With backbone. And kindness.

The attribute I most admired was Walt’s authenticity. He was so comfortably himself. No pretense, no affectation. And he gave no mind to those acting on airs, those putting stock in power, wealth or prestige. He was his own person. He rode a bike to work daily, even in winter. He wore Birkenstocks regularly, often with argyle socks. He paid regular visits to his dad in a Philadelphia nursing home, long after his father ceased recognizing him. He was a happily dedicated family man, a patently loving husband and a parent severely wounded by life tragedies that did not long diminish his smile or darken his heart.

Walt traveled the world, but simply. He taught writing in college classrooms for 31 years. His reading appetites took him everywhere; he knew everything. My revelatory insights typically earned a knowing smile, as if he had been waiting for me to catch up. But he didn’t talk a lot — a few concise sentences would do. He taught this job, and life, by quietly being himself. And by what he based decisions on. And how he steadfastly, wisely navigated tense passages. And his great respect for the language. And for rigorously applying truth to these pages. And cultivating a workplace that incited the imagination.

Walt gave me a lot more than a cactus.

The cactus still sits on my windowsill. It came from the Main Building to Grace Hall when the magazine relocated. It has survived two subsequent renovations, journeying around the fifth floor here as we vacated the space and workers removed walls, installed cubicles and frosted glass, strung wiring, painted and carpeted. Remodeling, updating, modernizing.

The cactus persists somehow as a good and tangible symbol of an inheritance. A magazine with a legacy to honor. A friendship and a path to follow. Along with a multitude of treasured memories from our hikes together. And the image of Walt’s smiling, amused face.

One evening shortly after Walt passed on, I told my wife (Walt was the best man at our wedding) that I didn’t yet know the secret that he seemed to carry with him — but that I was sure a lot, lot closer to it for having walked with him all those years.