“What the . . .” I get rudely attacked for a second time. “JOHN BYRON!” I shout as he laughs and steps back when I lunge for him.

I throw a pillow in his general direction, startling him enough that I am able to smack the gun out of his hand. He retaliates by pulling out a second water gun.

“Why do we own two of these?!” I am running around and tripping over living room furniture, trying and failing to avoid the water spurting my way.
“His-and-her set from the wedding.”
“I hope we didn’t send a thank-you note. Whoever gave us these clearly does not want our marriage to succeed.” I’m hiding behind some oversized pillows. “Seriously, I was asleep!"
“You’re just mad because you didn’t think of this first.”
“Yes, that’s why.”
“Just wait, my remote control helicopter gets here on Friday.”

We met at Notre Dame our freshman year. A shared philosophy class ensured at least twice a week we would see each other, allowing a friendship to develop. Over time, his friends became my friends, and my roommate got used to him just dropping by. We were friends and then we were more than friends and then five years later we were married and moving to California. 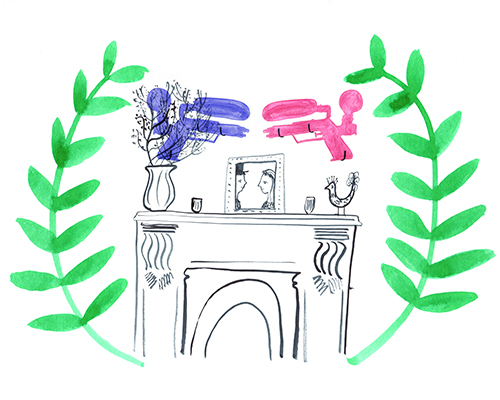 “JOHN, THIS IS AN EMERGENCY!” Yelling might be overkill in our small house, but it gets the message across.
“What! What’s wrong?”
“I. Need. Chocolate.” I’m not usually dramatic, but desperate times call for desperate measures, and I SWEAR there was a quarter jar of Nutella and a bag of Peanut M&M’s here just yesterday. “Where’s the chocolate?!” I think I might cry.
“Oh, I had that with ice cream yesterday.” My face must indicate my emotional instability. “We can get some more,” but looking at the clock he verifies it is too late for any place to be open, “tomorrow?”
I cry.

In the first year of marriage we have moved across the country, settled into a new house, combined our checking accounts and filed our taxes jointly. We have fought over the most menial things and consumed a lot of Mexican food. I’ve learned to enjoy Star Wars movies and camping trips. He has learned to cheer for the Spurs relentlessly and that coffee must come before conversation in the morning.

“Boom. Done. Debt-free and lowered our car insurance, all in one day.”
“Woo!” I do my version of a happy dance in our home office. “High five for doing adult things!”
As our hands hit I realize, “We need like celebratory champagne or something! Do we have champagne?” The look he gives me makes it clear we have never had champagne. “Or anything?! What do we have?”
“Um, grape juice?” John comments as we head into the kitchen.
“No. Not adult enough. OH! I know.” Reaching into the freezer I grab the Fireball Cinnamon Whisky.
He agrees, handing me the shot glasses. I already have my phone in hand. “Kelly, don’t Instagram this,” he pleads.
“Too late, I’m going to get all the likes!”
“Very adult.”

We share a bathroom and closet without killing each other. I drive him insane with my inability to pull my car into our garage “correctly.” He does not seem to be aware we have a dishwasher. We have struggled with the idea of “couple friends” but have slowly managed to find great people whom we both enjoy spending time with.

My sister is visiting and we are having breakfast. John finishes eating his banana and immediately goes to administer a stealth move, yelling “BANANA SLAP!” as he, in fact, slaps me with his banana peel.

“I believe we are even now,” I state as we fist-bump to celebrate his successful slap.

My sister stares at us. “Why is that a thing? That shouldn’t be a thing. Tell me this isn’t a regular thing.”

We have yet to figure out a laundry schedule. We both try to keep the house picked up, but sometimes get lazy. We have visited more than 30 wineries and have watched endless hours of Netflix. We have agreed to disagree on which state is really the best. (Texas, obviously.)

“Just CHOOSE already!”
“I am NOT CHOOSING.”
“Kelly, you’re being a little ridiculous, just pick where you want to eat, please.”
“I’m fine with whatever, John!”
“Do you want Mexican or Thai?” The restaurants are in opposite directions from where we currently sit in the Walmart parking lot arguing over dinner choices.
“Neither. Either. I don’t care.”
“You’re so hangry, and it is so annoying.”
“That literally did not help my mood at all.”
“Fine, we’re going to get Thai.”
“Fine.”
After being seated in the restaurant and looking over the menu, John hesitantly asks, “Do you know what you want?”
“Mexican.”
“You’re impossible.”

We go to Mass together. We swallow our pride and apologize when we are wrong. We try to do things daily that make our marriage an enjoyable one. We are learning how to be married. And the biggest lesson I have learned this first year is that it is really, really important to our marital health that he never, ever finds the water guns again.

“AHA!” he shouts from the kitchen.
“What was that?”
“Noooothing.”
He pokes his head through the door. “Get this question right: Where are the water guns hidden?”

“Sh-t.” I’m already scrambling off the couch as he launches his attack. For some reason I lunge for our front door, making it outside without a clear plan. I quickly realize I’ve just run outside in my pajamas (it’s 4 o’clock in the afternoon) and our neighbors are out watching their kids play in the yard. I pause long enough for John, who has not seen the neighbors yet, to drench me.

“JOHN!” I snap. He looks over and waves as I sulk inside. He follows me in, walking straight to a cabinet, reaches as far back as he can and produces my supposedly hidden Nutella.

He grabs a spoon and hands me both: “My bad!”

This article was one of four second-place winners in this magazine’s 2014 Young Alumni Essay Contest. Kelly Flynn Kramb lives at Naval Air Station Lemoore in California, where she works for GE Aviation Military Systems as the IT lead, supporting military customers on engine repair and part replacement contracts.