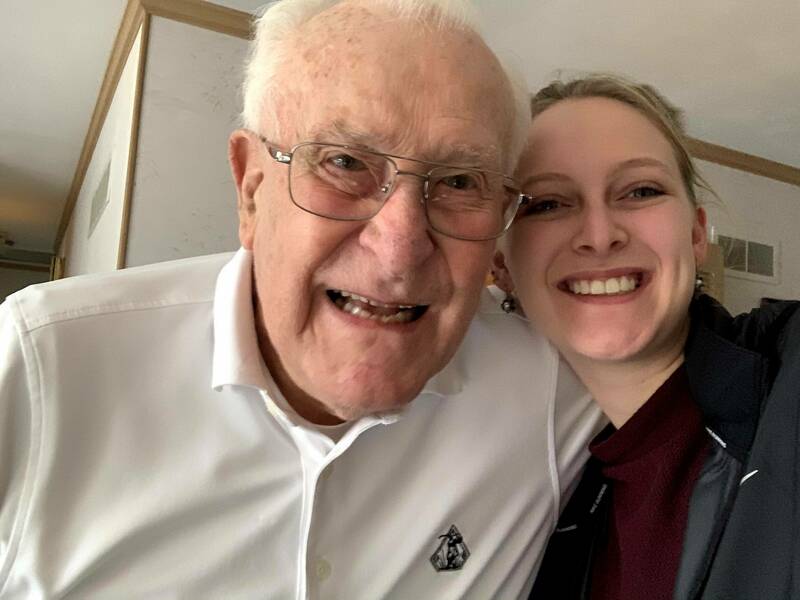 The author and her grandpa in 2019

Notre Dame knows how to mourn, a Holy Cross priest once told me, so it seemed only right that I was heading to campus the day after my grandpa’s funeral.

Grandpa died at 99, and I’d been fortunate, along with my dad and brothers, to say goodbye a few weeks earlier. He’d fallen a few times, had a bout of pneumonia and was adamantly tired of the aches and pains that come with being old. Unlike my grandma, who preceded grandpa in death by a few years, his mind was sharp until the end. Just 24 hours before he passed, he congratulated me on finishing a project at work and asked, “How’s that kitty cat of yours?”

The Thursday graveside funeral service was small, about 10 people, not including my dad who Facetime-ed in from the couch where he was laid up with COVID-19. Grandpa had served as a Navy parachute packer during World War II, so he received military honors: Taps, a gun salute, a color guard and the presentation of the flag.

A few hours later, after a lunch of Kansas City barbeque and much flipping of old family photo albums, I had to hit the road. Friday was the start of the two-year-delayed commencement weekend for 2020 ND grads like me.

I hoped Notre Dame would help me mourn and heal, the way it had five years earlier — just as the priest’s adage had promised at the time.

My sophomore spring, the rector of Breen-Phillips Hall — the inimitable Sister Mary Catherine McNamara, SIW — was in the hospital and not doing well. There was a pall over the hallways of B-P. When Sister Mary passed away a few days later, it felt as though the whole campus was shrouded in melancholy, but there was also a quiet strength. A prayerful resilience.

On the day she died, University leadership gathered B-P residents in the dorm chapel, which was encircled by priests and RAs. The meeting was brief and emotional, and ended with the playing of Sister Mary’s favorite song — “Shower the People” by James Taylor — as we passed around the boxes of tissues that had been placed on the ends of every pew.

Sister Mary and I started off on a bad foot when I ended up in her office for a minor disciplinary infraction freshman year. As any of my dormmates will attest, Sister Mary was a “scare them straight” kind of disciplinarian — she even questioned how I got into Notre Dame — but a generous and quick forgiver. Just a few months later, she hired me to be the B-P hall clerk, which encompassed tidying the common areas and helping her set up holiday decorations, and the following year she gave her blessing for me to spend two semesters studying off campus.

By the time of her death, I felt as close to Sister Mary as anyone could hope to be. Sometimes, she’d tell me first if she was putting food on the table known as “Betty’s Chair.” If she wanted intel on any of my friends’ lives, she’d invite to her room for hot chocolate. I was glad to have had a second chance to prove myself to her and surprisingly grateful for her harsh words that prompted me to take a closer look at my actions.

The Notre Dame community came out in force in the weeks following Sister Mary’s death. Counselors were at our disposal — right in the B-P basement — for days. Food and flowers poured in from every dorm on campus, and Betty’s Chair overflowed. At the next women’s home basketball game, which was probably the first one Sister Mary missed since starting at Notre Dame, a tribute to her was played on the big screen.

At her memorial service, the Basilica was packed — with the 10 rows up front reserved for B-P Hall, all of us wearing B-P’s characteristic hot pink with a familiar Sister Mary quote on the front of the shirt: “We live in hope.”

Five years later, as I drove back to campus for Commencement weekend, I felt the presence of many loved ones watching over me: Sister Mary, of course, who probably would have asked if her finals-week chicken soup is still the best I’ve ever had; and my grandpa, alongside with my grandma, humming the fight song and telling me to give my “kitty cat” a pat for him.

Arriving at Main Circle, I felt some of the heaviness lift off as that familiar spirit of quiet strength and prayerful resilience welcomed me, and as Sister Mary’s words echoed in my mind: “We live in hope.”

My friends, as they heard of my loss, enveloped me in hugs and acknowledged that Grandpa was at peace and, indeed, smiling down on us. I visited the Grotto and lit a candle in his honor, as I did many times after Sister Mary’s passing. When it came time to don my cap and gown, I also wore a family heirloom — the necklace my grandpa gifted grandma on their 60th wedding anniversary.

As I went through the weekend, I was reminded again and again — the Notre Dame community knows how to mourn, and it knows how to help heal.

Mary Bernard lives in Albany, New York. She is a social media and content marketer at Media Logic, a marketing agency that works with healthcare and financial services companies.