Maybe it’s the hair. Maybe it’s the perfectly cut, salmon-colored blazer, or the flat-top Super sunglasses, or black flatbrim that says BOOM, but rocker/architect Lawrence Santiago and rapper/lawyer Jeffery Stephens ’07 stand out in a crowd. And that’s exactly how they want it.

Both are talented professionals. Stephens is a lawyer in Chicago; Santiago has an advanced degree in architecture. But their off-hours work sets them apart: Together the two Domers are the musical duo Santiago X The Natural (the X is pronounced ‘times’), producing original music that accomplishes the rare feat of being alt-rock, R&B soul and funky hip-hop at the same time. 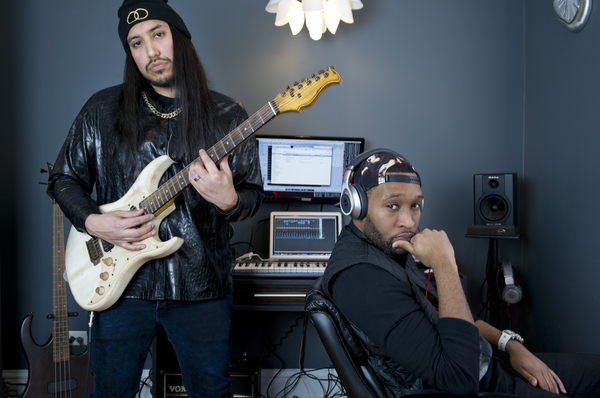 They jumped onto the national radar with their blue-and-gold arena anthem “Warriors” in 2012, then followed it up with a self-produced new single, “Got A Hold Of Me,” a defiant, anti-cubicle manifesto in their signature rocksteady style.

Life is moving fast for Santiago and Stephens. They’ve scooped up licensing agreements with ESPN, earned acclaim from the Chicago Tribune as one of Chicago’s best unsigned acts and performed at the Notre Dame pep rally before the 2012 game against Michigan. Their return was a homecoming of sorts, back to the campus where the talented duo first started recording in Santiago’s Zahm Hall dorm room in the 2003-2004 school year.

The up-and-comers recently spoke with Notre Dame Magazine about writing music at 3 a.m., their hopes of playing Lollapalooza and drawing musical inspiration from Paula Cole’s “I Don’t Wanna Wait.” From an edited transcript:

ND: Balancing music with professional life must be a lot of work.
LS: Music and architecture has always been a hard balance for me.
JS: But for me, there’s just no way I’m going back to the hood. There’s no way I’m doing that.

ND: Why do you think people in the business world are encouraging you to pursue music?
JS: Because it’s good.
LS: Well the music’s good, but I feel like a lot of successful professionals have had…
JS: Passions?
LS: Other passions that they’ve had to suppress to realize success. We think, through their encouragement, that the hybridity of being successful professionals and passionate creative types is our reality. It’s where we want to be.
JS: I never really felt like I was meant to have a normal life, especially after I started recording and hearing our stuff. This is the barometer I would test with: How can I be a dad, or a granddad, and my kids not know how good I was?
LS: And I’ve always known this about Jeff. We both feel the same way, in different respects. But we’re each other’s catalyst, you know? We’re each other’s validation.
JS: And you got that long hair. The girls like that.
LS: We both feel the same, our music is complementary, we both enjoy each other’s music.
JS: Yeah man, I feel like it’s destined to happen. I love collaborating with Lawrence.
LS: In Jeff I saw a rapper, a diamond in the rough, who has a good ear. That’s what sets us apart from other hip-hop groups. We are songwriters first. We don’t take somebody else’s beat and rap over it and call it a song. We make every single sound on every single track. We record it ourselves. We do it all.

ND: So it’s a grind sometimes.
LS: There’s a grind element, but we understand that perfection doesn’t exist in art. Definitely not in hip-hop. There’s a time and a place we just have to call it finished. We have all these organic, conceptual songs. Each one of our songs is surrounded by imagery.

ND: Imagery?
LS: Imagery. Each song is surrounded by these graphic images that reinforce the emotion or the concept that either starts with a beat or starts with a lyric to try and push to the other side. If it’s lacking in lyrics, we’ll create an image to the beat that pulls out the emotions and creates the lyrics. And vice versa.
JS: He’ll come up with some stuff, and I don’t know what the hell he’s doin’….At 3 a.m. I’ll get this riff, like a piano with this beat. And I’m just like, ‘the hell were you doing at 3 a.m.?’

ND: Growing up, what were the styles that your families listened to?
LS: For me, growing up on Guam, it was dance hall reggae music, soul from the 70’s, funk, Earth Wind and Fire. I was really soaked in the hip-hop scene when I was young.
JS: Me, I was listening to the 90’s golden age, golden era music. You know, Bad Boy records and Death Row records. Arista, the Face, Toni Braxton, Whitney Houston, 112, Tupac, Biggie [Smalls], all those. I’m even an Eminem guy.

ND: You’re going to be on a desert island and you get five albums you can listen to forever.
LS: My first four would be: The Miseducation of Lauryn Hill, ATLiens by OutKast, and Sublime’s Sublime and 40 oz. to freedom. I gotta think about the fifth one.
JS: Either The Marshall Mathers LP or The Eminem Show. Paula Cole’s This Fire. Real talk. That’s the one where she has “I Don’t Wanna Wait.” [They both laugh]. Thriller is in there. A Tupac album, gotta have Tupac. And the fifth one, maybe a Dashboard Confessional album. That’s real talk, man. It’s on my phone right now.
LS: I’d do the Beatles’ Love soundtrack.
JS: You gotta throw The College Dropout in there. And an X-Box. I know that’s not a thing, but I need an X-Box. How I’m gonna plug it in, I don’t know.

ND: So what’s your dream venue? Notre Dame Stadium?
JS: I would always want to come back and do Chicago Theater, just because every day I pass it, I see those marquees up there and I say ‘One day my name’s gonna be up there.’ But everybody wanna do the Garden!
LS: Mine’s more of an event, like the Grammy stage or the VMA [Video Music Awards] stage. More like event architecture.
JS: I really wanna do Lollapalooza. [Hits his hand on the table]. He wants to do it, I wanna do it. Focus on making music, but man, Lollapalooza? [Hits the table harder.] That’s huge!
LS: All these really tangible goals are starting to become realized, and things are falling into place.

ND: So how do you move forward? Can you come at it with a specific goal?
LS: We have the big picture in mind. It’s to have 100 percent – more or less 100 percent – creative control of the music we put out there and being able to make a living off it. But short term, we do have little goals like: What shows are we gonna book next month? What record label are we gonna sign with in a few months?
JS: Music is what we do. We gotta make this happen.

To listen in and stay updated on Santiago X The Natural, visit their website santiagoxthenatural.com.

Michael Rodio, who was this magazine’s spring 2012 intern, writes for the Daily Domer, a Notre Dame Development Office website. Contact him at mrodio@nd.edu.