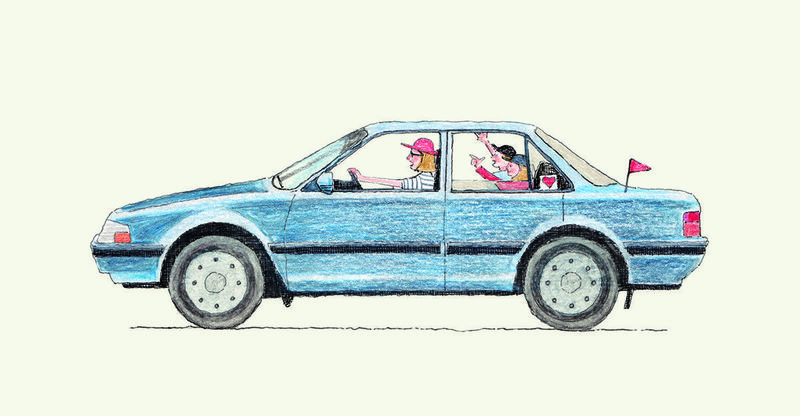 He got me every time because he knew I never watched television. I’d put the key in the ignition, and my 7-year-old son would ask contemplatively, “Why aren’t you driving a Ford?” Three words into my answer, he would interrupt — “No, Mom; it’s a commercial!” His 4-year-old sister would shriek with laughter, and instead of ignoring her as usual, he’d grin back. Ever since their father walked out on us, my son was not quite so disdainful of his sister’s ardent admiration.

Weeks later, while we were playing Candyland, my son leaned forward, lowered his voice confidentially and, in the earnest tones of a psychoanalyst posing an epiphany-inducing question, asked: “Wouldn’t you really rather be driving a Mercury?” Pivoting from the Candy Castle to the teachable moment, I explained, “Well, actually, I’d rather be driving a Porsche, sweetie, but we all have budgets, and . . .”

“No,” he leaned back, satisfied. “It’s a commercial.” His sister gave him an Academy Award’s worth of adulation.

After their father left and, as my daughter put it, “by accident took all the money,” car breakdowns were a recurring topic of conversation, so much so that my daughter would push the little handmade wooden car on the play mat’s town roads, let it roll to a stop and say, “Uh, oh!” Then she’d change from vexed driver to auto-shop receptionist, summoning, “Moe to the office, Al line one. Moe to the office, Al line one.”

My son’s response was trickier to understand. I think he repeated the words of the TV car salesmen because he could offer their simple solutions without being disloyal to his father. After all, as far as he knew, consciously anyway, it was just about cars, not lives, breaking down.

Years went by, days and cars started and stalled, overheated and cooled off, and we all lurched forward. Then came the stroke-of-luck Honda. It had been kept in an indoor garage and only used to go to the supermarket and church. It was shiny. It had no dings. Its owner was moving, and his son asked me how much I had for a car. “Three thousand dollars. How much is it?” “Three thousand dollars.” Even 20 years ago, that was a pittance for a 6-year-old Honda with, in essence, no miles.

We sat in that car like the Beverly Hillbillies in their mansion. “Wow! The power windows go down — and come back up!” “The seats recline!” “The radio works!” That was the summer of the Spice Girls: “Tell me what you want, what you really, really want. I’ll tell you what I want, what I really really want, I want a, I want a, I want a, I want a” car with an air conditioner that works, and this one did. Each time it started up, with no mandatory “wait for it to warm up” period, a sense of euphoria set in.

A few weeks later, as I was driving the kids to school, my son observed philosophically, “It may be used, but it’s still a Honda.”

“Why, that’s the way I feel about it,” I replied, impressed.

But by now, his little sister was reading, and she gleefully tattle-taled, “It’s the billboard! He’s just reading it!”

“Well, that’s OK,” I said, serenely. “For once, there’s truth in advertising.”

The afternoon the Honda was stolen, I had locked the doors and set the alarm, as always. However, I hadn’t removed the cut-off switch or used the club lock because I expected to be back in 10 minutes. When I went back a couple hours later, it was gone. No broken glass. Vanished without a trace. I called the police and explained what happened more like I was reporting a missing person than a stolen car. As they drove away, I blathered something that amounted to “May the force be with you.”

The more I learned about the high rate of car theft in the Bronx, the more the thought of someone chopping up my Honda for parts inspired me to answer the insurer’s questionnaire —  “If an arrest is made, and we prosecute, are you willing to testify?” — with gritted-teeth assurance: You can seek the death penalty.

I needed a car to get to work, and the rental insurance benefit was grinding to a halt, and so I bought a Nissan from a neighborhood couple. Teary-eyed, these medical residents, these scientists, told me they called the car Bessie, patted it goodbye and asked me to take good care of it. They were too embarrassed to ask me overtly to call it Bessie, so I volunteered that I would, and I did. But it was always going to be their Bessie and not my Honda.

I hired the same two guys I had hired to alarm my Honda to booby-trap Bessie. My daughter was watching and periodically greeted passersby by jumping into police gun-firing stance and shouting, “FREEZE! PUT YOUR HANDS UP! STEP AWAAAAAY FROM THE VEHICLE!” No one froze, but she persisted in enforcing law and order around Bessie.

While the three of them were out there, I went in to get the mail, and found a letter from the police. I tore that letter open. They found the Honda. It was at the police impound lot. I could come claim it Monday.

I ran back out, stopped the alarm guys in mid-blitz, and said I was going to the police impound lot to see the car, and I was going now, even though it was Saturday.

The alarm guys said they were going, too. They wanted to see how their alarm had been defeated.

I got there first, but there were rows of cars in the lot, and I couldn’t see the Honda. When the alarm guys arrived, I said, “Don’t waste your time, guys, there’s barbed wire and a Rottweiler.” They got out of their car anyway. Alarm Guy 1 started talking to the dog. He talked to the dog a long time. He reached cautiously through the fence and petted it. I wondered, flabbergasted, Even if he is a dog lover, is this really the dog, is this really the time, and is this really the place? And then Alarm Guy 1 began a walk-with-me-talk-with-me with the dog, slowly leading the now docile “Rottie” over to the far right end of the fence, as Alarm Guy 2 whisked himself up the fence on the far left, found the Honda, looked it over, and in a flash was back on the sidewalk.

“How’s it look?” I asked apprehensively.

“It looks great,” he grinned.

That evening, my daughter was climbing the ladder to her loft bed, muttering, “Lemme show ya what I think of your attack dog!”

Undoubtedly beyond the copywriter’s wildest fantasies, I heard myself thinking: It may be stolen, but it’s still a Honda. . . .

In the morning, the insurance adjuster, to whom I had already mailed the keys, and who had already authorized the insurance check, didn’t look at it quite like that. His variation would have been, “It may be a Honda, but it’s still totaled.” However, he responded to what was beyond his job — the emotional desperation — did some fast dialing, stopped the confiscate-the-keys/mail-the-check process, and we struck a retention deal. The keys came back in the mail days later.

I had the Honda towed to my mechanic, who said, in the authoritative manner of an expert who expects his advice to be followed, especially by someone he knows to have poured windshield-wiper fluid into the antifreeze tank, “The way I look at it, somebody steals my car, I don’t want the car back. Why didn’t you just keep the money and run? I’m not going to mess with a stolen car. Who knows what they did to it that won’t show up for weeks?”

What I do know about my car and my children and myself is that the point of reporting it, when what belongs to you has been stolen, is to recover it, and that the point of recovery is to reclaim what belongs to you, hidden damage and all. To do otherwise is to affirm that the thieves’ powers to destroy exceeds the combined powers of the police, the insurer and the mechanic to recover. To focus on hidden damage overlooks that there is also hidden value.

That car was never just metal and rubber to us. From day one, it was a symbol of good fortune, a gift that proved we could manage to have something that actually worked just beautifully. Even sitting in the impound lot, it was all that and more. It’s proof that when it takes a village, we have a village with an alert policewoman, a flexible insurance agent who factored in emotions, a car built to be repaired so as to be even better than before: new seats!

It’s proof that, comical as it may have appeared, at its heart, a very little girl decided to jump into police gun-firing stance as opposed to bedwetting, for instance, and a very fragile boy decided to imitate the men who had the answers instead of the man who caused the problems. This was our car.

Since my usual auto mechanic was not on board, I called Honda.

“What would you do if it was your car?” I asked the mechanic who answered the phone.

“I’d sit on a milk crate, hot-wire the car and drive around to see if the tranny’s still good.”

“Great, I’ll bring it right over.”

But I got the idea, and drawing on my working-class roots, for which I am occasionally surprised to be grateful, I had the car towed to a different mechanic who did sit on a milk crate, hot-wire my car, test drive it with no plates, no registration, no insurance and, of course, no receipt, and — what luck — the transmission was good.

I sold Bessie. I got the third mechanic to fix the Honda and, as I wrote the check, found myself grinning. It may be used, it may have been stolen, it may have been driven around the South Bronx for 800 miles, it may need new seats, a new battery, tires, ignition and a door lock, but, damn it, it’s still a Honda.”

I drove it home.

Lauren Shapiro is a New York-based freelance writer, songwriter and dance accompanist at Alvin Ailey and elsewhere. Her publications include the song “Better Things to Do,” recorded in 2016 by Annika Chambers.