Sunrise in Vermont offered cold temperatures, sun and the promise of a bluebird sky. Skiing was my passion, and I woke early to get on the mountain for first tracks.

Later, after clicking into my bindings on the mountain, I faced the morning sunshine, in line for the first lift ride of the day with only a few ski patrollers ahead of me. I got my first tracks and quickly got back on a lift for the long trip back to the top, hoping for another set of first tracks on a different trail. The January morning was close to perfect: good snow, moderate temperatures, little wind, no lift-lines and that bluebird sky. I rode up and skied down repeatedly throughout the glorious morning, thinking frequently about how much I loved the experiences skiing provided.

About 11:30, though, I became aware of a pain in the back of my neck. It was bothersome, but I tried to disregard it — until I finally had to quit. I applied ice and took some anti-inflammatory medication. An hour later, I realized something was seriously amiss and decided to leave Vermont and return home to Massachusetts, where I would have better access to my doctor. 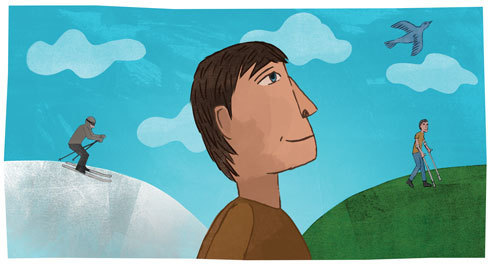 Over the course of the following week, little of which I recall, the condition worsened. That Saturday my doctor, fearing dehydration, put me into the local hospital. At 5 a.m. the next morning, January 16, 2005, I awoke from sleep and tried to change position, only to find that nothing worked.

I was paralyzed from the shoulders down.

I recall responding calmly to this situation. It was 2005, after all, and doctors could fix practically anything, right?

Within a couple of hours, I was at UMass Medical Center. Family was summoned, tests were completed and a neurosurgeon prepared to operate despite the tests and MRI confirming — nothing. The surgery itself revealed an infection in my cervical column that put pressure on the spinal cord, causing damage that could not be repaired.

Later, in recovery, the first thing I heard was my wife telling me that we would figure out our “new normal.”

Two years earlier I had completed a 35-year career in public education as a teacher, high school principal and, finally, 21 years as a superintendent of schools. Since retiring from that career, I had been working for a teacher certification testing company, a job that offered time for travel and skiing in Vermont. Now I had been dealt a new life sentence.

A second surgery followed three days later. After nine days in intensive care, I was readied for transition to a rehab hospital for intensive therapy that would last four months. That therapy would represent my last, best chance to recapture some normal function.

The doctor was direct about my prospects for recovery: They were bleak — despite my being in excellent physical condition and having always had a God-given mental toughness.

And so I entered therapy, a total quadriplegic unable to move anything below my neck. I was told that I needed to check my dignity at the door and, if I worked real hard and was one of the lucky ones, I might be able to retrieve it on the way out. I had to be fed, shaved, combed and brushed. An itching nose required assistance. I could do nothing for myself other than chew food and swallow. I was hoisted out of bed with a Hoyer lift, feeling more like a horse than a human. The humiliation of total dependence was constant. These were dark days, without any assurance that I would ever get any better.

Apart from the obvious physical challenge, there was my mental state. People in this kind of situation often exhibit symptoms consistent with the Kübler-Ross model of the Five Stages of Grief: denial, anger, bargaining, depression and, finally, acceptance. While it was already possible to identify behaviors consistent with the first three, I was determined not to let this thing into my head. And acceptance? Out of the question. As I told my wife, “I’ll deal with this thing, but I’ll never accept it.”

As the weeks turned into months of therapy, four and sometimes five sessions a day, my therapists were becoming increasingly concerned that the depression/acceptance part of the Five Stages was not being exhibited. I was visited frequently by the resident psychiatrist, and my physical therapist one day snapped at me, “You’re not going to walk out of this hospital, you know.” My response was, “Maybe not, but I’ll walk back in some day!”

I assumed the mantra of a warrior and frequently referred to myself as such. If I was going to be a quad, I was going to be the best one I could be. I was not going to be beaten by a MRSA staph germ. Of course, looking back, I know my denial was probably masking depression.

At about six weeks, I began to get some upper body function back, and soon I was able to handle some of my personal needs without assistance. By the time of my release in May, I was classified as a “functional quad,” which means that despite the lingering symptoms and nerve issues, I was capable of some normal activity. The therapy continued at home and then on to out-patient clinics and, finally, on my own in a local gym.

Indeed, I am one of the lucky ones. I was never supposed to get out of a wheelchair. My doctors referred to me as a miracle. The day did come when I walked back into that hospital — even if on crutches.

But the depression that I never exhibited was, of course, part of the experience. My strong daily appearance was followed by long, silent nights. I had a lot of time to think about things. Things like what I had lost and how my future would turn out. I was lower than I had ever been in my life — yet still determined not to reveal it. Sure, I was a warrior, but I was also scared, learning to deal with nerve pain which would be a constant in my life and laboring to re-acquire at least some of the things that I had always taken for granted.

There were other pressures as well. A good friend told me that this was an opportunity to find out if I really was the person I always thought I was. I had two sons that I had tried to raise to become strong men; now I needed to model all those words I had spoken so easily. I was the guy with the sign in his office: “Life is 10% what happens to you and 90% how you respond to it.” I had always talked the talk; now, could I walk it?

I am nine years into my “second” life. For the most part, I remain resolved “to handle it” but do face moments of weakness when I feel sorry for myself, usually when I’m alone and often in bed during the early morning hours.

But I am fortunate to have antidotes to counter bouts of self-pity. Some come from sources known to me; some come from total strangers. They all snap me out of my momentary pity parties.

For example, when I go to the rehab hospital, I often see a situation which makes me ashamed that I occasionally indulge in self-pity. Like the time the door of a nearby van opened and the ramp came down and out came a powered wheelchair carrying a pretty, blond girl of about 15. She had spinal bifida and had been in a chair most of her life — while I had enjoyed 60 years of an active, mobile life.

When I told my doctor about the parking lot encounter, I said I should be embarrassed to ask, “Why me?” He looked at me and said, “Why not you?” It still gives me pause for reflection.

Recently we were at an outdoor concert in Maine. It was a beautiful, summer Friday evening. While my wife visited a nearby store, I ambled over to the concert area and stood, my crutches supporting me, watching this little slice of life. People brought fold-up chairs, blankets and coolers, and an airy mantel of contentment hung over the scene. As I stood (itself a feat I was once told I might never accomplish again), I felt a wave coming over me as I watched all these “walkers” having so much fun with family and friends. I returned to the car to await my wife’s return and sat looking out the window.

Shortly, along came a little girl of about 10 using forearm crutches like mine. Unlike me, she didn’t move one step at a time but instead used the crutches to elevate so she could swing both legs through simultaneously. She was skilled, and it occurred to me that even at this young age she must have had a lot of practice. She was headed to the concert with her family and, unlike me, had a big smile on her face.

Situations like these help me keep perspective and for that I am grateful. Now at age 69, I am committed to living out my days in as positive a manner as possible. I view myself as being “handicapable” and try not to let my condition define me. And I always find comfort in the thought that when life started to unravel that Sunday morning, I was on a mountain doing what I loved most.