The baritone voice booms as I slip into the F train. It’s 7:30 a.m. Every morning I walk down the same street to the same hole in the ground, to the same spot beside the same faded blue beam, and I wait. As I stand there, down in the bedrock, the musty smell hits me. It is a mix of grime and dirt, of grease and oil, of grit and perseverance — it is the smell of New York City. 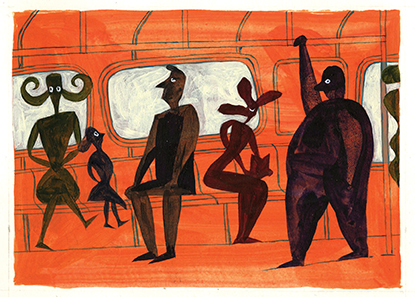 Every New Yorker has a unique relationship with the subway. For many, the train is an opportunity, or a step toward a goal. For others, it’s an escape. For some, it’s a new connection or relationship. But what is it to you? And, more importantly, what are you making of the ride?

For me, it has provided the best metaphor for life — a long and winding journey with stops along the way. Think about it: Your adventure-seeking self sets out with plans and baggage (small or large, based on the situation). You have a destination in mind and, if you’re lucky, you have good company. You take your plans, your time and yourselves to the platform, where you wait for the train to arrive. Depending on the day, you’ll plot the fastest or the most scenic route. You’ll hustle; you’ll float. You’ll get lost in lyrics, shoot someone a smile, donate some money or food, maybe curse to yourself at annoying fellow travelers — definitely one or all of the above.

Delays are almost inevitable. There’s a sick passenger. There’s a snowstorm. There’s a packed train. The express train makes local stops. The local train runs express. The “swipe again” sign at the turnstile flashes as you try your MetroCard — just as the train doors are closing. Yet somehow, in rare moments, everything goes according to plan.

Some riders will be with you from start to finish. They’ll sit next to you through those anxiety-producing holdups and the constant flow of people. They’ll make the ride better, or worse. Others will join you for a couple of stops and then set out on their own route, never to cross your path again. You’ll meet strangers at busy stations because you took the local and they took the express. Who knew you were taking parallel trips? Who knew you shared something in common? Who knew they’d end up accompanying you the rest of the way?

Despite all the hate New York’s subway receives, I think it is wonderful because it equalizes in a city where no one is equal. In the darkness underground, it’s hard to be superior to others when you’re lumped into a mass. The privileged cannot distinguish themselves from common folk, since fancy clothes risk being soiled. The subway dissolves such barriers. We are the human condition, pressed together inside a small, shabby train car. We are all subjected to the same delays, the same discomfort, the same noises and smells. We all pay the same price ($2.75) to push past the turnstile and descend.

Sure, the subway is a form of transportation, but to me, it is much more than that — it is a way for me to flee. Because that’s what my family and I do. We flee. My parents fled Sri Lanka’s civil war for a safer life in America. They fled the immigrant haven of Flushing for the ritzier streets of Forest Hills. I fled the dilapidated public schools for private education. And I fled New York City to find my home under the Dome.

You see, I have always been an outlier. Now I am a Hindu among Catholics, a Sri Lankan among Caucasians, a first-generation college student among legacies. My very presence at Notre Dame is improbable. But on the subway, none of that matters. I am one of a million passengers. I blend in seamlessly with the crowd. I am neither different nor the same as anyone else. I am able to fade into the background and simply exist among the crowd. And that is my biggest flaw.

Riding the subway every day for years has made me too comfortable with lurking in the background. It’s something I really struggled with during my freshman year at Notre Dame. Don’t get me wrong, I’m a very social person, but living in such a homogeneous environment made me doubt my individuality. It’s something I still work on every day. What I have come to realize during my time here is that being an outlier is something I should value. In fact, it is where I stick out that my presence is probably needed the most. And I am proud to say that my best achievements at Notre Dame have come from being an advocate for students who, like me, also feel like outliers from time to time.

Not all fleeing is bad, though. Take my parents, for example. They were born and raised in Sri Lanka, a beautiful island nation south of India. They came from agrarian families that raised chickens, milked cows and grew coconuts, bananas, mangoes — just about any tropical fruit you can think of. As you might imagine, they’re not really city folk. But they had no choice but to flee when civil war ravaged their beloved home. While their journey to New York City was more complicated than a subway ride, it wasn’t too different, either. They experienced a lot of uncertainty and delays throughout the trip, and confusion once they arrived at their destination. They have lived in New York for 27 years now, and my dad proudly takes the train to work every morning, knowing that the rockiest parts of his journey through life are over.

And so, as I soar underground, lost in the line of a song or the maze of a book, I remember my parents. They descended into the abyss of the unknown and cleared a path for me where there was only darkness and stone. I remember all of this whenever I ascend into daylight.

When the F train arrives at my stop, the same booming voice announces, “Briarwood.” The passengers file together like dominoes, following the momentum of the train until it comes to a halt. As I stand in front of the doors, waiting for them to open, I think about how many years I have taken the same route and stared at the same doors that reflect my blurry image. The continuity of the subway in my life puts me at ease, and when I walk out of the station and return to the surface world, I am enthralled by the idea that millions of passengers take the same journey as mine every day. But even though we may be on the same train and get off at the same stop, our actual destinations differ greatly.

So stand clear of the closing doors, please. I have a train to catch.