Sometimes the vagaries of the writer’s craft become less baffling after repeatedly committing words to a page over months or years. On other occasions, the subject receiving a scribbler’s attention comes into sharper focus, even after a volume appears.

During a discussion not long ago about a book I completed last year on Father Theodore M. Hesburgh, CSC, one participant inquired, “What did your relationship with Father Hesburgh teach you?”

The question caught me off guard. Sorting through a half-century of reporter’s notes and taped interview transcripts for the project, I tried to tell what Notre Dame’s long-time president thought and did at key moments of his career at the University and in his various other responsibilities in government and public life. But my reactions, let alone what I might have learned, play a minor role in the narrative.

Yet the more I thought about the question — the response I offered at the time was, at best, rambling and unsatisfactory — the better I could see the value of setting down some specific lessons that the life I wrote about taught me.

Never stop learning. Until his final days, Hesburgh tried to keep up with current affairs and areas of inquiry he considered important. Though suffering from macular degeneration, he would have students visit his office on the 13th floor of the Hesburgh Library every day to read newspapers and other publications to him. In both his office and at his residence, he also listened to countless books on tape, most supplied by the Library of Congress, to learn about new research or studies.

Never stop listening. Hesburgh was a gifted, garrulous talker who also understood the importance of hearing from people with competing viewpoints. As Notre Dame’s chief administrator and as a member of the U.S. Commission on Civil Rights, he listened to divergent perspectives before making a decision. He often started conversations we had with a direct question: “What should I know?”

Never stop seeking. In higher education, governmental and foundation assignments, Hesburgh often worked to arrive at common ground, the place where students or citizens could come together in a spirit of shared agreement. Finding the middle course never meant compromising his moral authority. It was, however, a continuing process of building consensus amid conflicting opinions to resolve problems or issues.

Never stop doing. For someone who often pursued multiple “jobs” — his favorite word for his older-style version of multitasking — Hesburgh always kept a demanding schedule, even in his later retirement years. His inability to see prevented him from continuing his longstanding regimen of constant travel, but that didn’t stop him from going to his office seven days a week. From his 80s onward, he often repeated a credo expressing his own approach: “Do as much as you can, as well as you can, as long as you can, and don’t complain about the things you can no longer do.”

Never stop believing. For much of the 20th century and into the 21st, Hesburgh devoted himself to the Catholic Church, to Notre Dame and to America. His faith, university and country formed a trinity of enduring and intersecting callings that oriented most everything he did, and his dedication to each remained unwavering. Daily prayer provided spiritual sustenance when dealing with difficulties in one or another area, and he was fond of saying that he’d frequently look out the window of his library office to ask Mary atop the Main Building for her intercession. 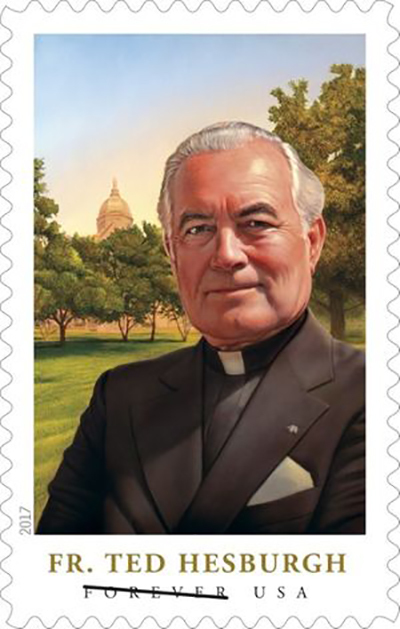 The centenary of Hesburgh’s birth is May 25. A U.S. postage stamp will be issued in his honor September 1. From the day of his ordination in 1943 until he said his last Mass on the day he died in 2015, Hesburgh conducted himself in ways that provided abiding lessons. A few of them are worth remembering throughout this anniversary year — and into the future.

Robert Schmuhl is the Walter H. Annenberg-Edmund P. Joyce Professor of American Studies and Journalism at Notre Dame, where he’s taught since 1980. He’s the author of Fifty Years with Father Hesburgh: On and Off the Record (Notre Dame Press)