In July of 2013, I was standing in the front room of the famous Shakespeare and Company bookshop, on the left bank of the Seine, looking through a shelf of books about Paris. I thought I would purchase a book that would enrich my experience in the five days I had ahead of me in Europe’s cultural capital, but nothing was catching my fancy. I knelt down to scan the bottom shelf and spied there a copy of George Orwell’s Down and Out in Paris and London, looking forlorn and unadorned among the glitzy rash of travel books celebrating the glories of Paris. 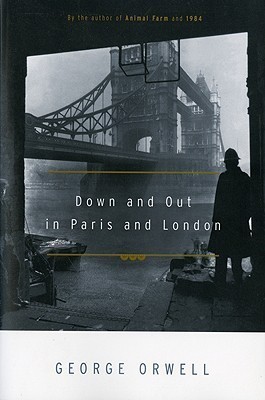 I plucked Orwell’s 1933 nonfiction novel from the shelf, like Charlie Brown purchasing his scraggly little Christmas tree from the lot of shiny silver monstrosities, and began reading it that afternoon, sitting in the lobby of my hotel room and drinking hot chocolate while my family rested in our rooms upstairs.

I find it hard to convey the astonishment with which I greeted the opening pages of this book, which features the following description of the low-rent Paris district where Orwell lived while he researched and wrote about the lives of the poor and exploited classes in the city:

“Quarrels, and the desolate cries of street hawkers, and the shouts of children chasing orange-peel over the cobbles, and at night loud singing and the sour reek of the refuse-carts, made up the atmosphere of the street . . . . It was a very narrow street — a ravine of tall, leprous houses, lurching towards one another in queer attitudes, as though they had all been frozen in the act of collapse.”

My previous acquaintance with the work of George Orwell had been with a handful of his most famous essays, such as “Shooting an Elephant” or “Politics and the English Language,” as well as his two most famous novels, Animal Farm and 1984. One or the other of these two dystopian novels are force-fed to just about every high school student in America; I remember reading them in high school myself, and then returning to them briefly, but not very substantively, when I was doing research for my doctoral degree in contemporary British literature.

So as I tore my way through the pages of Down and Out in Paris and London, over the course of the next couple of days in Paris, I felt like someone had been pulling the wool over my eyes for the past several decades. The narrator of this penetrating work of literary journalism was no dour critic of communism, no scolder of imprecise language, no prophet of doom. He was a good-humored, lively writer who sought to understand how the poor lived, and who did so not simply by studying or interviewing them but by becoming poor and living among them. He walked starving through the streets of Paris, he washed dishes in the subterranean passages of a swanky city hotel, he slept in homeless shelters in London, and he picked hops with itinerant workers in the fields of England. He wrote about their struggles — and his own struggles — with empathy and understanding, seeking to illuminate for his readers the real challenges faced by the poor and exploited members of society.

The job titles and social contexts have changed from Orwell’s day to our own, but not the powerful insights he offered into how poverty hides itself from those of us who benefit from the goods and services it produces for us, and how it warps and deprives the mind as much as it starves the body.

I am now on my third trip through the book, and it might seem strange to say about an author who has a novel on almost every high school English syllabus in America, but Down and Out in Paris and London has convinced me that George Orwell — the Orwell of Paris and London, the Orwell who sought to understand the poor by incarnating himself among them — deserves an even closer look than we are already giving him.

James M. Lang is a professor of English at Assumption College in Worcester, Massachusetts, and author of Cheating Lessons: Learning from Academic Dishonesty. He is working on a book about the nonfiction writing of George Orwell.