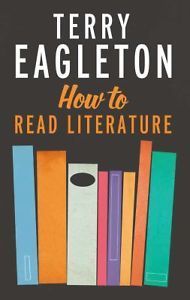 Terry Eagleton is one of those scary-smart people, world-renowned as a literary critic and theorist. When the visiting professor arrived from Northern Ireland to give an open lecture at Notre Dame in October, called, amusingly enough, “The Body as Language, or Do Badgers Have Souls?” I was in the audience, planning to write a blog on his talk.

About five minutes into his speech I realized that the (drumroll) Excellence in English Distinguished Visitor, University of Notre Dame, and the Distinguished Professor of English Literature, University of Lancaster, UK, had pitched his talk for graduate-level English lit students. I was once one of those and could follow some of what he was saying, but what I really understood was that a general-interest blog of his speech was a nonstarter.

But Terry Eagleton doesn’t always speak in the higher realms of esoteric literary criticism. Sometimes he speaks to general readers, inviting them to enter the world of literary criticism and discover, as he says in his preface to How to Read Literature, “that critical analysis can be fun.”

How to Read Literature does not disappoint. Whether talking of plot and character or the more formal aspects of literary works, including syntax, rhythm and allusion, Eagleton gently and often lightly moves readers to consider not only “_what_ is said” but “_how_ it is said.”

He examines this emphasis on form over plot with such writers as John Updike, J.K. Rowling, Vladimir Nabokov, Carol Shields, Shakespeare, Jane Austen, P.D. James and Virgil. The professor even takes a quick and amusing side trip to critique the nursery rhyme “Baa Baa Black Sheep,” a verse now permanently stuck in my head. It’s all in the name of how to read.

The Washington Post called How to Read Literature “a lively and engaging primer on basic strategies for appreciating literature, a kind of English 101 in a book.” I call it cheaper than a college class and a fun excursion for those who appreciate the art of reading.