One pleasant evening in June 2001, I spent an hour in Ennis, Ireland, listening to a Seanachai spin folk stories. He was one of a vanishing breed of Celtic Storytellers, alias Seanachai, who trace their craft back to an era before writing came along. (There were just seven left in Ireland, he claimed at the time.)

His name is Eddie Lenihan, and he told us a story about Biddy Early, a folk healer who arranged a comeuppance for a disapproving curate. Thickly bearded with minimal hairline and horn rim glasses, Eddie entered into his story with enough body language and facial contortion to bring listeners into the tale with him. It was a grand evening. 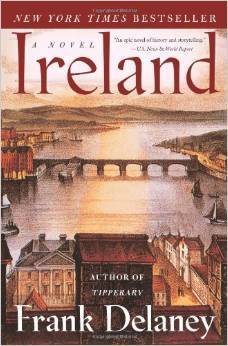 I thought of Eddie almost as soon as I started reading Ireland: A Novel, by Frank Delaney (Time Warner Books, 2004). The plot, such as it is, focuses on a young Irish boy entranced by a Storyteller who drops in one night, spins stories in return for a meal and a bed, and moves on. The boy spends years tracking the elusive visitor down.

But the plot line is chiefly a vehicle for lessons in Irish history, Storyteller-style. The Seanachai tales cover the highlights from the construction of Newgrange (“a long, long time ago”) to the Easter Rebellion of 1916, the formative moment of present-day Ireland. In between we encounter Brendan the Navigator’s visit to Newfoundland, Saint Patrick and that business with the snakes, visits from unfriendly Vikings and Normans, and introductions to such luminaries as Jonathan Swift and Charles Stewart Parnell.

These are familiar bits of history, true, but I enjoyed the book not so much for new information as for the author’s keen ear for the lilt and humor of Irish speech. In short, I kept hearing Eddie Linehan in passages like this:

“There was a man who lived in the mountains of Galway, in the year of Our lord, nine twenty five. A big bucko, with broad shoulders and dark curly hair, he had looks so handsome that when ladies saw him they wanted to swoon and throw themselves down on his boots. And many of them did.”

Storytellers of the world, arise and lift a glass to Eddie Linehan. A bit eerily, you can even look him up on Google.