Most of us know someone who lives life out loud, to the fullest, bright as yellow. They seem unfettered by fears. They walk past boundaries, flout the rules, and nothing bad ever happens to them because of it, as we are sure would happen to us if we stray just a little or color even a tiny bit outside the lines. 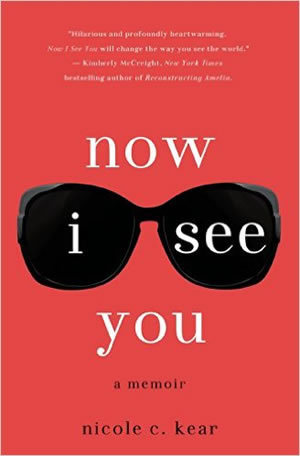 In the opening chapters of Now I See You, a memoir by the writer Nicole C. Kear, she describes her younger self like this, wild and free. But instead of being self-congratulatory, she comes across as endearing. Her early 20s flash by in a slideshow of adventure. European travel. Circus school. A cross-country move to Los Angeles. Pilot auditions.

She came into focus for me quickly. One of my high school friends was like this in the late 1980s. She wore all black, sprayed her hair out to alarming size and spikiness, and belted out songs as she strode with confidence down the dark streets of New Haven. I followed her into adventure, to the edges of my curfew, into new territories of my own boldness as a young woman. I know now, so many years later, that her fearlessness masked a normal human’s helping of pain and young adult angst. But back then I saw her as brash, adventurous and edgy. And I wished I could be like that.

Kear had her own good reason for throwing caution to the wind and living a daring life, wearing miniskirts and bright lipstick and high stilettos, and jumping into love affairs with gusto. At age 19 she learned she was going blind.

Now I See You is Kear’s tale of how she embraced life and tried to cram it all in before she lost her sight. Rather than accepting her diagnosis of retinitis pigmentosa as a death sentence, she took it as an invitation to say “Why not?” She lived more life in a few years than many do in decades. But there was one thing she wouldn’t, couldn’t rush — becoming a mother.

The happy ending here (spoiler alert) is that even though her sight diminished rapidly as she got older and as she went through each pregnancy, Kear was able to see all three of her children. Her story is told with humor and wit, in a voice that makes you feel like you are already old friends.

The one thing Kear takes a long time getting past, at least in the arc of this book, is coming clean with people about her condition. Through much of the story, comedy ensues when Kear sets off to do seemingly mundane things, like meeting a girlfriend at a bar, without the ability to really see what she’s doing. And she won’t tell anyone she’s legally blind, so she pretends everything is normal and then winds up tripping over babies or stumbling through a nightclub in the dark.

I’ll give her a lot of slack here. We all have our weird things about ourselves, and Kear’s waning sight is certainly not a regular hang-up. I mean, I’m not interested in showing the world my bare belly ever again, but that’s not keeping me from functioning in public. But I never quite understood why, even after revealing her mostly blindness to friends resulted in more friends who would help her, she was so reluctant to be open about it within her own community.

Now I See You is funny, sad and moving, and it makes you wonder if those larger-than-life people you know are really that free and easy or whether they are so courageous because they’re racing against time.

Then again, aren’t we all?