I found myself on a nine-hour flight with no television, no Internet and all my downloaded films mysteriously deleted from my e-reader. While wondering how I was going to pass the time, I remembered I had downloaded Still Alice, a book which has been on my to-read list for nearly a decade.

In just a few airborne hours, I had inhaled the entire novel, told from the point of view of a renowned Harvard cognitive psychologist who recognizes in herself the symptoms of early-onset Alzheimer’s. Within 320 pages, readers see Alice Howland quickly swing from an admired professor to a confused and dependent patient. The transition is heartbreaking. 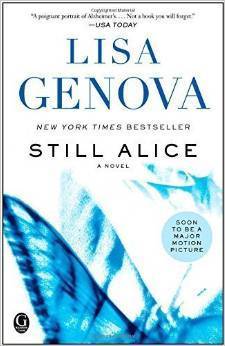 In one of Alice’s early episodes, she finds herself disoriented and lost in a place as familiar as her own home:

“She wanted to continue walking but stood frozen instead. She didn’t know where she was. She looked back across the street. . . . The corridor, the hotel, the stores, the illogically meandering streets. She knew she was in Harvard Square, but she didn’t know which way was home.

“She tried again, more specifically. The Harvard Square Hotel, Eastern Mountain Sports, Dickson Bros. Hardware, Mount Auburn Street. She knew all of these places — this square had been her stomping ground for over twenty-five years — but they somehow didn’t fit into a mental map that told her where she lived relative to them. A black-and-white circular ‘T’ sign directly in front of her marked an entrance to the Red Line trains and buses underground, but there were three such entrances in Harvard Square, and she couldn’t piece together which one of the three this was.

“Her heart began to race. She started sweating. She told herself that an accelerated heart rate and perspiration were part of an orchestrated and appropriate response to running. But as she stood on the sidewalk, it felt like panic.”

Because the story is from Alice’s perspective, her confusion seeps through the pages and into the reader’s own mind. It’s frustrating as a reader, too, to feel like you’re receiving an incomplete account of reality. But perhaps it is meant to simulate the feeling of the early stages of dementia. It’s a strange and captivating look inside an Alzheimer’s-inflicted brain, and I’d be lying if I said it didn’t strike a little worry in my own mind. For those of us that prize learning, education and mental agility, is there much more terrifying than losing our mental capabilities?

The author, Lisa Genova, is able to pen a compelling and realistic story, as she herself is a Harvard-trained neuroscientist. Still Alice, her first novel, spent more than 40 weeks on The New York Times bestseller list. Since then, she’s published Inside the O’Briens, Love Anthony and Left Neglected, which cover such neurological and neurodevelopmental disorders as Huntington’s Disease and autism.

What they also discuss is the effects on families as they cope with a loved one’s diagnosis. Reactions vary and relationships shift as symptoms worsen. Those on the fray come into the spotlight, and those once held closest gradually fade away. It forces readers to consider their own priorities, their own reactions and their own compassion. What would we do in those shoes?, we must wonder. Which character in this story would I be? Would I show patience and servitude? Or would I shrink away, pretend the problem was not real, not severe? Would I be angry? Or could I somehow peacefully accept the situation?

And, I found myself asking, which would be worse: To be Alice, or to be her loved ones and realize she is not still Alice?